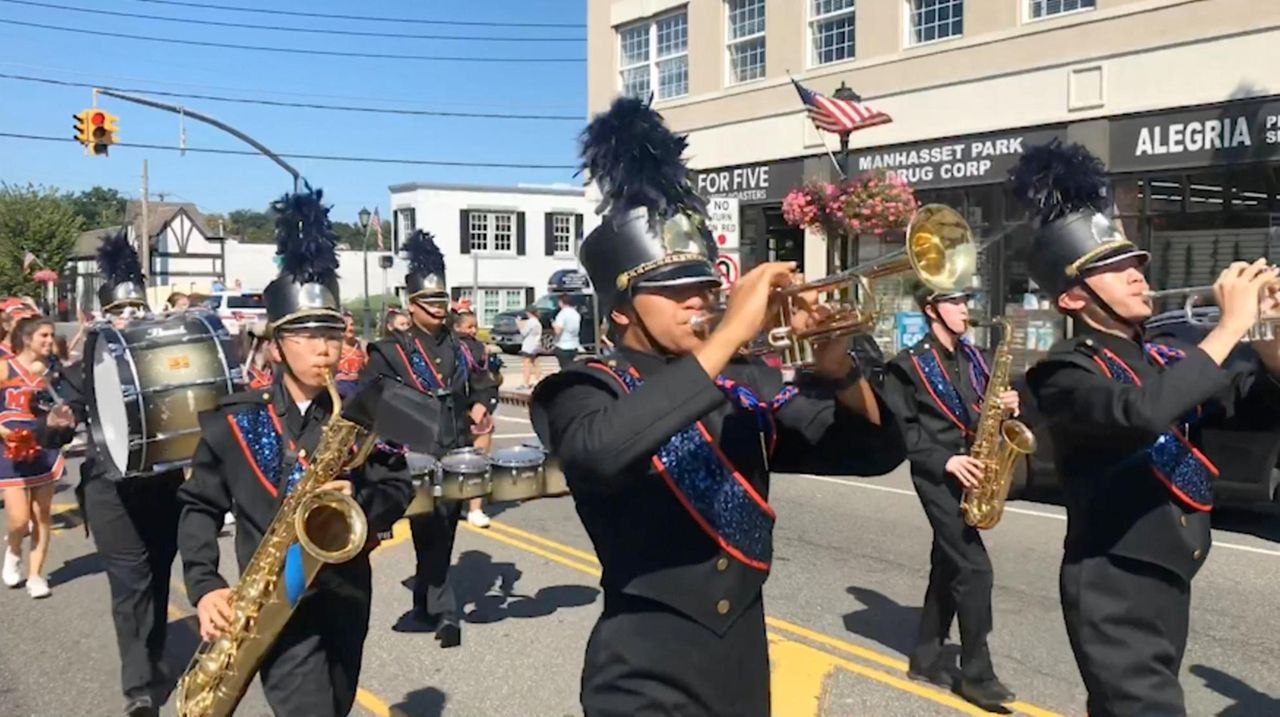 The Manhasset High School marching band spent Sept. 21 performing in the homecoming parade, the football halftime show and a band competition all in one day.  Credit: Newsday / Erin Serpico

Manhasset High’s marching band lined up outside the school’s main entrance on a recent Saturday afternoon as band director Randy Knudsen paced in front of them.

The band was about to march down Plandome Road and perform in the school’s homecoming parade.

“Do yourselves proud. You’re going to look good out there, I know it,” Knudsen exclaimed to the 25 band members. “You may be small, but you are mighty.”

It would be a full afternoon if the parade and football game halftime show were the band’s only performances that day. But before the game even ended, they were packing up to leave.

A few hours later, just before dusk, band members were once again decked out in uniform behind Lindenhurst Middle School, practicing for a USBands competition that evening.

Trailers carrying large drums rolled along the pavement, with chimes clanking together and a saxophone balancing steadily on an amplifier. A large set of symbols vibrated as the band members dressed in black, red and blue followed, hoping to squeeze in some rehearsal time.

“They’re used to it,” Knudsen said of having multiple events in the same day. “...If we wind up that there is homecoming on a day that we have a competition, this is what we do.”

Before the half-mile parade began the afternoon of Sept. 21, the color guard reviewed their flag formations and some students helped each other secure the zippers on their uniforms or adjusted each other’s hats.

Joe Yoo, 17, a drum major and percussionist, has been a part of the marching band since eighth grade. While it can include long days, he said, “it’s definitely worth it.”

“We’re all a family, since we’re a generally small marching band,” Yoo said. “I think that’s special, since you can’t really do that with a bigger one.”

Trumpet and saxophone sounds dominated the practice areas before the halftime show as the band huddled to review parts of their 7-minute set themed “Impressions of America,” including songs like “America the Beautiful” and West Side Story’s “America.”

“We’re a very, very small band, especially this year,” drum major and color guard captain Sofia Matos, 17, said. “But when we get together, we can create a really powerful sound.”

Christopher Hale, director of fine and performing arts for the district, said days like homecoming demonstrate the dedication of the band, as well as staff and parents. About a dozen volunteers helped set up and dismantle the band equipment for each performance.

“It’s such a community effort,” he said. “It’s quite a production. When you’ve been a part of something like this, it sticks with you.”

Matos said she and the band members have all become tight-knit outside of band rehearsals, performances and bus rides to competitions.

“We hang out in someone’s basement, have a pasta party, or go bowling. So we’re all very, very close. These are like my closest friends,” she said.