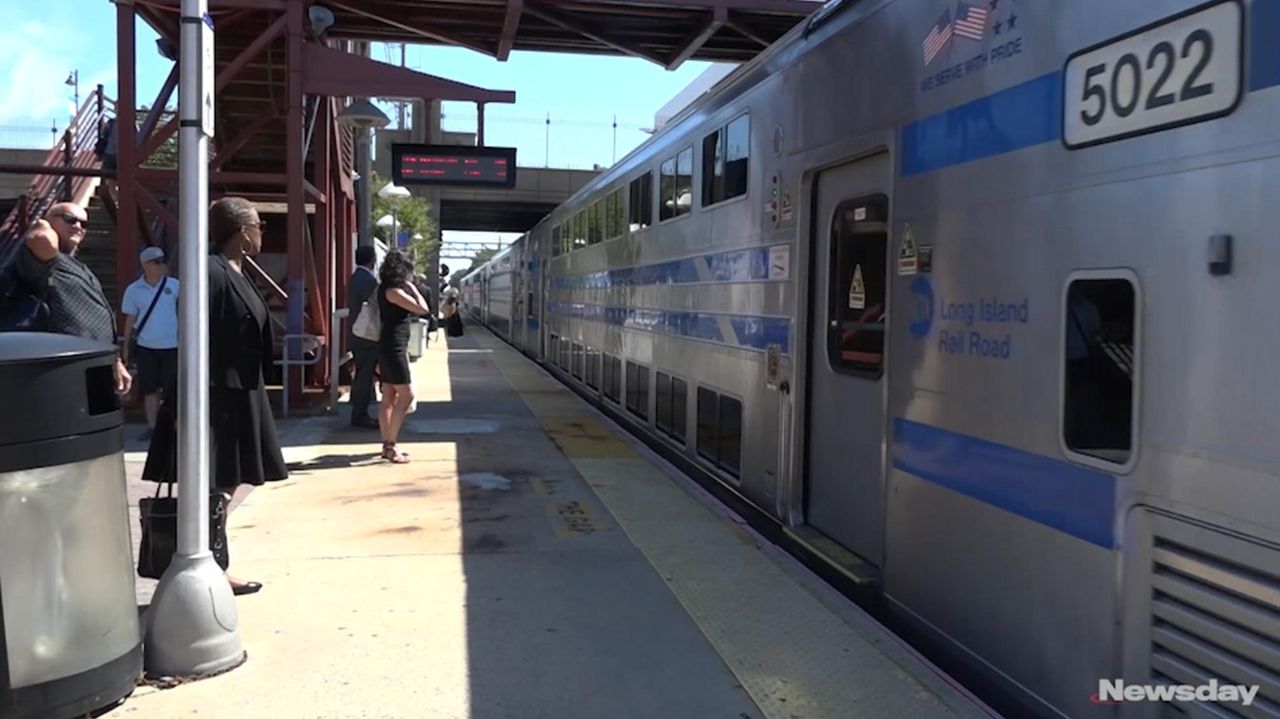 Nassau County Comptroller George Maragos said his office will withhold a $28 million annual maintenance payment to the MTA this month after surveying nearly 400 Long Island Rail Road commuters and finding 65 percent were dissatisfied with their overall experience taking the train.

The payment is due “now,” Maragos said Wednesday at a news conference at the LIRR’s Mineola station, and that he is legally bound to pay it. However, he said he will first wait to see how the Metropolitan Transportation Authority, the LIRR’s parent agency, responds to the findings of the poll.

Maragos, a Democratic candidate for Nassau County executive, sent the results of the survey to MTA chairman Joe Lhota in a letter dated Aug. 13.

“I urge the MTA/LIRR management to heed the low commuter satisfaction in all major areas and take more aggressive initiatives to improve,” Maragos said at the news conference.

In the letter to Lhota, Maragos began by noting that a September 2016 internal survey of commuters by the MTA found 84 percent were satisfied with the services overall — findings he said are now hard to believe in light of his own polling.

In a statement, the MTA said the LIRR just had its best month of on-time performance all year, thanks largely to measures to mitigate the impacts of Amtrak’s summer repair work at Penn Station.

‘‘Comptroller Maragos should set aside his grandstanding,’’ said MTA spokesman Aaron Donovan. ‘‘The simple fact is, the County cannot by law withhold these funds. Even if they could, he would be hurting his own constituents and be a part of the problem, not the solution, if he withheld critically needed funding from the LIRR.”

In addition to the 65 percent who Maragos said were dissatisfied with the service overall, poor satisfaction rankings were also received in the four other “key” areas in which they were questioned.

Maragos said the public announcements on trains and in the stations were found to be difficult to hear clearly.

“Management is only deceiving itself with their internal polling, which appears to be as unreliable as the service being provided,” Maragos said at the news conference.

Before making the $28 million payment, Maragos said he wants MTA officials to respond and tell us what they’re going to do — what progress they’re making. “Maybe they can conduct their own survey to validate these numbers,” he said, adding that the poll should be conducted by someone outside the MTA.

“I’m urging them to do a scientific poll,” Maragos said. He added that at the very least he is “hoping to focus attention on a growing issue.”

Asked if he believes commuters in his poll were more frustrated this summer with their LIRR experience than commuters would have been when the MTA poll was taken in September, since commuters are in the midst of the so-called “summer of hell,” Maragos said that he believed enough time had passed for them to have calmed down about this summer’s inconvenience.

On June 10, commuters began their “summer of hell,” which Gov. Andrew M. Cuomo predicted would occur when Amtrak’s emergency repairs at Penn Station started, cutting LIRR service by 13 percent for eight weeks and resulting in the canceling of some trains and the diverting of others.

That was in addition to frequent problems with broken rails, derailments and signal issues resulting in delays and cancellations.

In June, MTA leaders, at Cuomo’s urging, vowed to hold back annual funding to Amtrak. The State Senate passed a bill authorizing the MTA to withhold payments from Amtrak and use the funds to reduce LIRR fares until conditions improve at Penn.

The LIRR is the nation’s largest commuter railroad, with an average weekly ridership of more than 300,000.

Pioneer in microfilm-document scanning dies at 88
FDA advisory panel rejects widespread Pfizer booster shots
LI surpasses 1,000 new daily cases of COVID-19
Local health officials set to give COVID-19 boosters once U.S. OKs them
Karen Andreone, athletic director and coach at OLMA, dies at 71
'A guy doing his job.' LI Marine killed by suicide bomber in Iraq, other vets to be honored at ceremony
Didn’t find what you were looking for?