Cecilia St. Arromand, seen on Wednesday, lost her husband, NYPD Officer Marc St. Arromand, in a motorcycle crash in April. "Every day is different for all of us," she said. Credit: Kendall Rodriguez

He was going to make the turkey on Thanksgiving. Marc St. Arromand happily took charge of the challenging task every November. But this year, his wife and five children will have to go it alone.

St. Arromand, a 14-year veteran of the NYPD, died in April after a motorcycle accident. The Elmont resident was on his way to work at Highway Patrol Unit No. 2 in Brooklyn.

His family is contemplating its first holiday season without him.

“Every day is different for all of us,” said his wife, Cecilia Jackson St. Arromand, wearing a small silver replica of his NYPD shield around her neck.

She held back tears last week as she spoke about the man they called a “marshmallow.”

The outpouring from NYPD and others he helped in the community provided some comfort during the bleak time after his death.

“I didn’t realize how many people he actually touched until he was gone,” she said.

A preliminary investigation of the accident by the NYPD stated St. Arromand lost control of his motorcycle while traveling southbound on Laurelton Parkway in Queens, and was thrown into the roadway, where he was hit by a car. It wasn’t clear if there was a final determination on the cause of the accident. 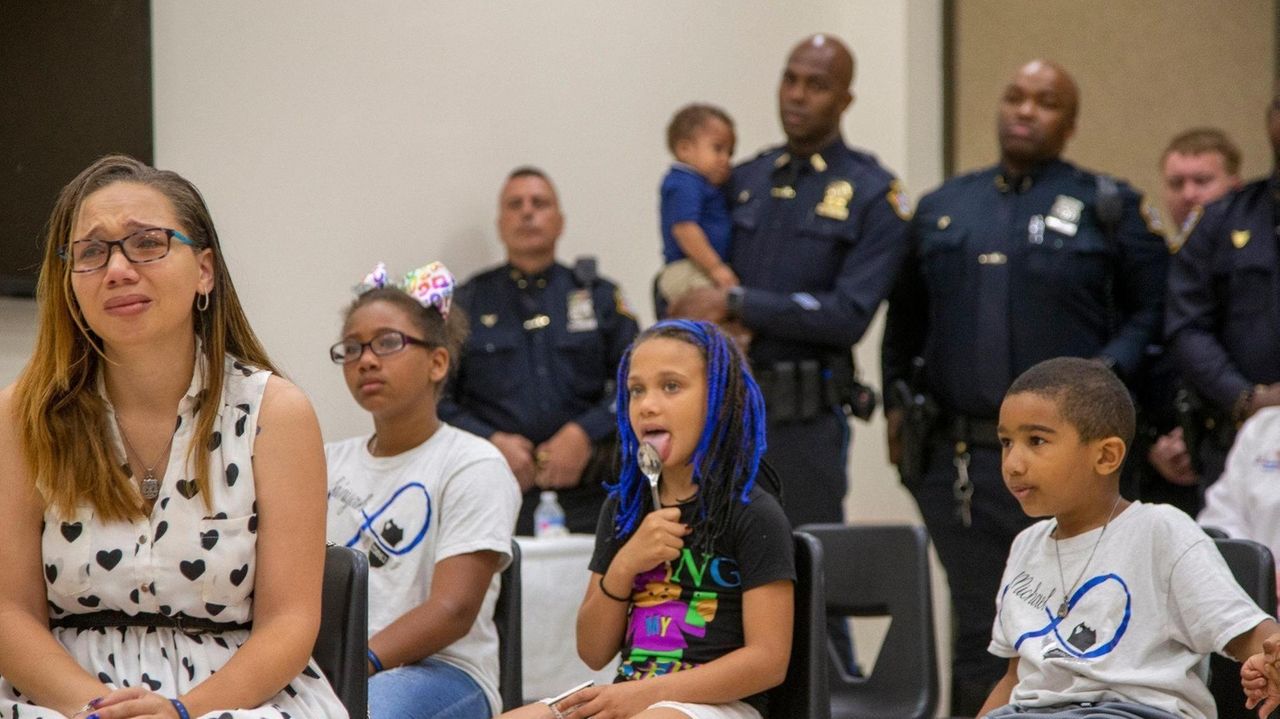 Hospital honored for its kindness after officer death The April morning when NYPD Officer Marc St. Arromand died, Long Island Jewish Valley Stream Hospital filled with his grieving family and highway patrol buddies. On Wednesday, Arromand's police unit, Highway Patrol Unit #2 in Brooklyn, presented the hospital staff with a "thank you" plaque for all they did to comfort his widow, loved ones and themselves. Credit: Howard Schnapp; Photo Credit: NYPD Highway Department

His wife smiled sadly as she recalled meeting her future husband in a McDonald’s on Francis Lewis Boulevard in Queens.

St. Arromand quickly became a loving father to her two daughters Sa’niyah, 11, and Cayla, 10. The family grew with the birth of Michael, 5; Daniel, 3, and Jason, 1. She sees parts of his effusive personality in each of the children. There’s the love of hot food, the people pleaser and — most of all — his big smile.

St. Arromand said she might try to take the kids away for the holiday, a change of scenery to ease the pain. But the one thing she will not change is the photos of her husband and kids that line the house.

“I believe that when they need to see him, they see him and he’s there,” she said. “So if we are laughing or talking about him or somebody makes a joke about what he would have made a joke about, daddy's here. He's right there.”

Hospital honored for its kindness after officer diesWhen a veteran officer died on his way to work hospital staff offered comfort to his widow, loved ones and fellow officers.