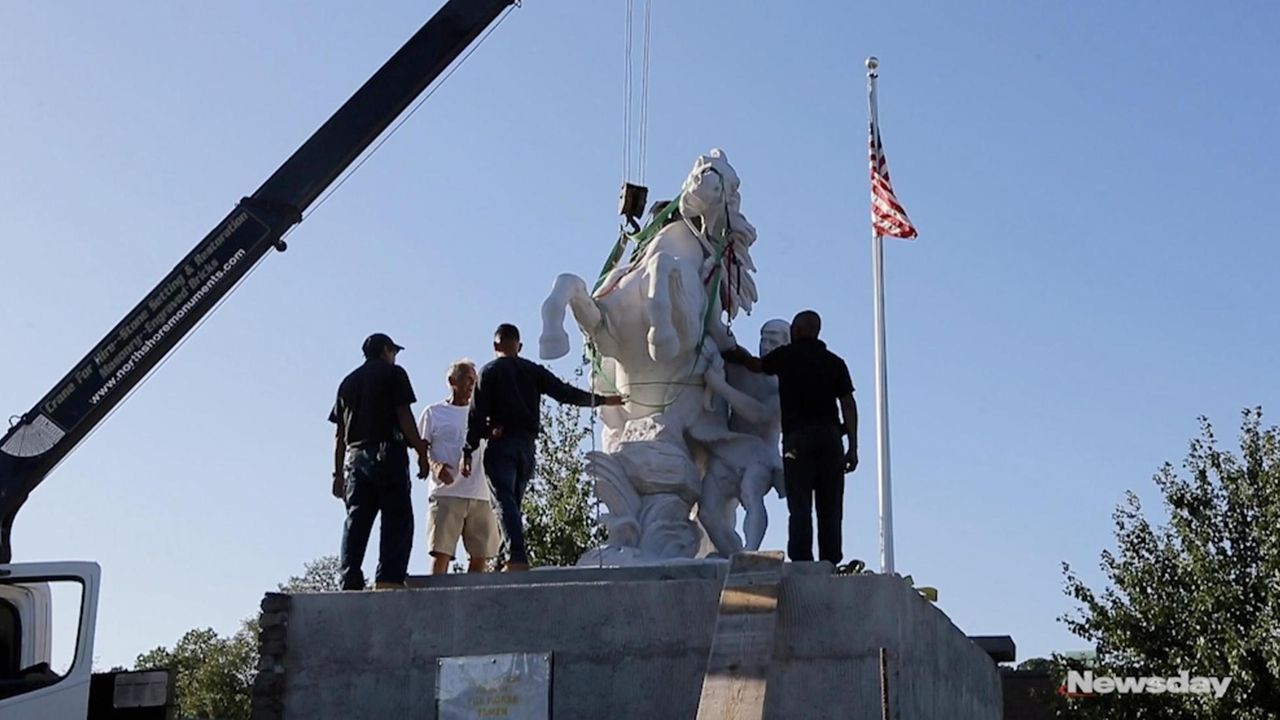 A century-old statue of a young tamer rearing a horse returned to Roslyn High School on Aug. 29, completing years of fundraising and restoration work to a statue modeled after the Marly horses that now stand in the Louvre in Paris. Credit: Howard Schnapp

The century-old statue of a young tamer rearing a horse has returned to Roslyn High School, completing years of fundraising and $150,000 in restoration work that began in 2012.

“It grabs your attention,” said Owamani Magezi, a school security aide, while directing busy traffic Tuesday morning as parents dropped off their children on the first day of school. “It looks majestic. It definitely adds something to the property.”

The 12-foot-tall statue is one of a pair of sculptures — the other is in Gerry Pond Park in Roslyn — modeled after the classic Marly Horses commissioned by Louis XV for the Château de Marly outside Paris. The originals are now in the Louvre museum.

The American replicas, which each weigh several thousand pounds, were erected in 1920 at the home of financier Clarence Mackay. The white marble statues, which were placed on either side of a garden terrace facing New York City, are one of the few items that remain from Mackay’s 648-acre estate known as Harbor Hill.

The statue had to be removed in 2012 after decades of exposure to the elements left it in a ruinous state. It was held together by red straps and was missing the groom’s head, his left arm and the horse's front hooves.

The school at one point put out a call searching for the man’s head — no questions asked — to no avail. The tamer’s left arm was later discovered in storage in the school’s maintenance building.

It was the alumni who came to the sculpture’s rescue.

“On a personal level, the horse was always part of my high-school experience,” said Barbara Berke of Boston, a 1969 Roslyn High graduate who organized fundraising efforts for the statue’s restoration. "The school mascot is a bulldog. But I think if you ask, nine out of 10 people would tell you it’s a horse because it’s such a feature piece" of the school.

Berke and other graduates raised more than $100,000, accounting for two-thirds of the total cost. A couple of grants covered the rest, and the school district paid for the landscaping and the pedestal.

For Berke, the timing couldn’t have been better. Next month, the class of 1969 will reunite in Roslyn to celebrate the 50th anniversary of their graduation.

“The fact that this horse statue is going to be back where it was, it’s going to be so meaningful to so many people from our grade who really supported the fundraising effort to get it restored,” Berke said. “It’s amazing . . .  It’s almost overwhelming.”

Kroplick said the Mackays hired more than 1,000 people to construct the mansion, and during its peak, close to 200 people to take care of their home, making the family one of the area's largest employers.

“It was the place where [Charles] Lindbergh went to to celebrate” in 1927 after the famed pilot attended a Manhattan parade honoring his solo, nonstop transatlantic flight, Kroplick said.

“The statues would be lit up," he said. "You could see the lights of New York City at the top of the west garden.”

Following Mackay’s death in 1938, the mansion fell into disrepair and was demolished in 1947. The property was sold, subdivided and developed, becoming home to hundreds of families.

More than a decade later, the two statues were separated. One was donated in 1959 to the high school, which was also part of Mackay’s estate. The other one stood in its original location, which became another family's backyard, until North Hempstead Town restored it and placed it in Gerry Pond Park in 2013.

“It has become a symbol of the school,” said Barry Edelson, the school district’s director of community relations, as he stood next to the statue as it was installed on an 8-foot-tall pedestal last Thursday. “From the 1950s until 2010s, for students, this is part of their school experience here.”

Walking past the giant statue on Tuesday, Liv Valauri, 15, was one of the few students who knew of the sculpture’s history. Her parents had told her about the statues since she was 5, and she later learned the history again in a social studies class when a teacher mentioned it.

“I think it’s pretty cool,” said Valauri, of Roslyn. “I’ve always seen it. The other one is in the park . . .It just shows the history of our [village].”