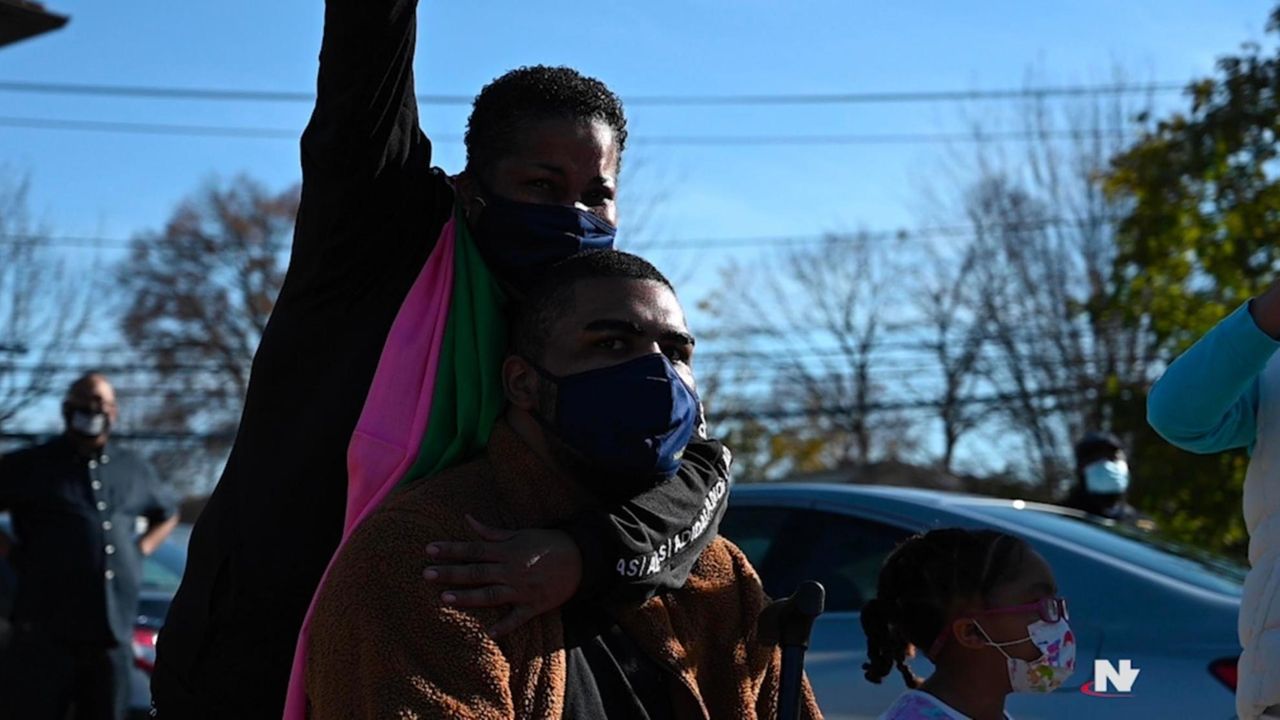 More than 100 cars and police and firetrucks drove past Matthew Davis' home in a car parade Saturday, in an outpouring of community support for the hit-and-run victim. Newsday's Steve Langford reports. Credit: Newsday / Steve Pfost

After three months and four brain surgeries, Matthew Davis was able to walk into his Westbury home.

Davis, 21, who was seriously injured by a hit-and-run driver in July, about a month ago returned to his home which was retrofitted for disability access thanks to community support.

On Saturday, more than 100 vehicles and police and firetrucks drove past Davis’ home in a car parade organized by Nassau County police, local officials and former Legis. Robert Troiano. Vehicles drove by honking horns and displaying signs including "Welcome home, Matty!" while a DJ played music such as the theme from "Rocky."

Community members, Nassau County officials and police have raised $35,000 for Davis, including a $3,300 donation from the Indo American Association for Change, who presented a check to EOC Construction. Improvements made to the home include widening doors to fit a walker and retrofitting a bathroom and shower.

The family is still facing hospital bills, as much as $150,000 from Glen Cove Hospital, that was not covered by insurance, his mother Leslie Davis said. A GoFundMe page has been set up to accept donations.

Not only did Matthew Davis have to recover from a July hit-and-run crash that paralyzed the left side of his body and required that he undergo brain surgery, but the crash also occurred six months after three consecutive brain surgeries to treat seizures caused by epilepsy, which he has suffered from since he was 5.

He was sent home early from rehab after his brain surgeries to treat the seizures in March due to COVID-19 restrictions. He met his first goal Saturday to walk outside with just a cane and now just wants to regain use of his left hand.

"This is very overwhelming. I just know I’m loved. I’m taking it one step at a time to get my hand ready," Davis said quietly in his room after a driveway ceremony following the vehicle parade. "I just want people to love each other."

Davis and a friend were walking to a deli July 23 at the corner of Prospect and Magnolia avenues when a speeding car jumped the median and struck them while they were crossing the street, said Nassau County Police Commissioner Patrick Ryder. He vowed to find the driver of the foreign-model car and police are now offering a $10,000 reward.

"That night Matt went out for a sandwich, his struggle began for a second time," Ryder said. "I said to do everything we can to help the family, because that’s what we do in law enforcement."

Leslie Davis said her son was thrown into the air and landed on his head.

"When his skull shattered again, they didn’t know if he was going to make it. I wanted to make sure he went to Heaven because he didn’t do anything wrong," Davis told supporters during the driveway ceremony. "Every encouraging word and everything you’ve done for me means the world. Because sometimes you feel by yourself, but I see Westbury and Nassau County love is real."