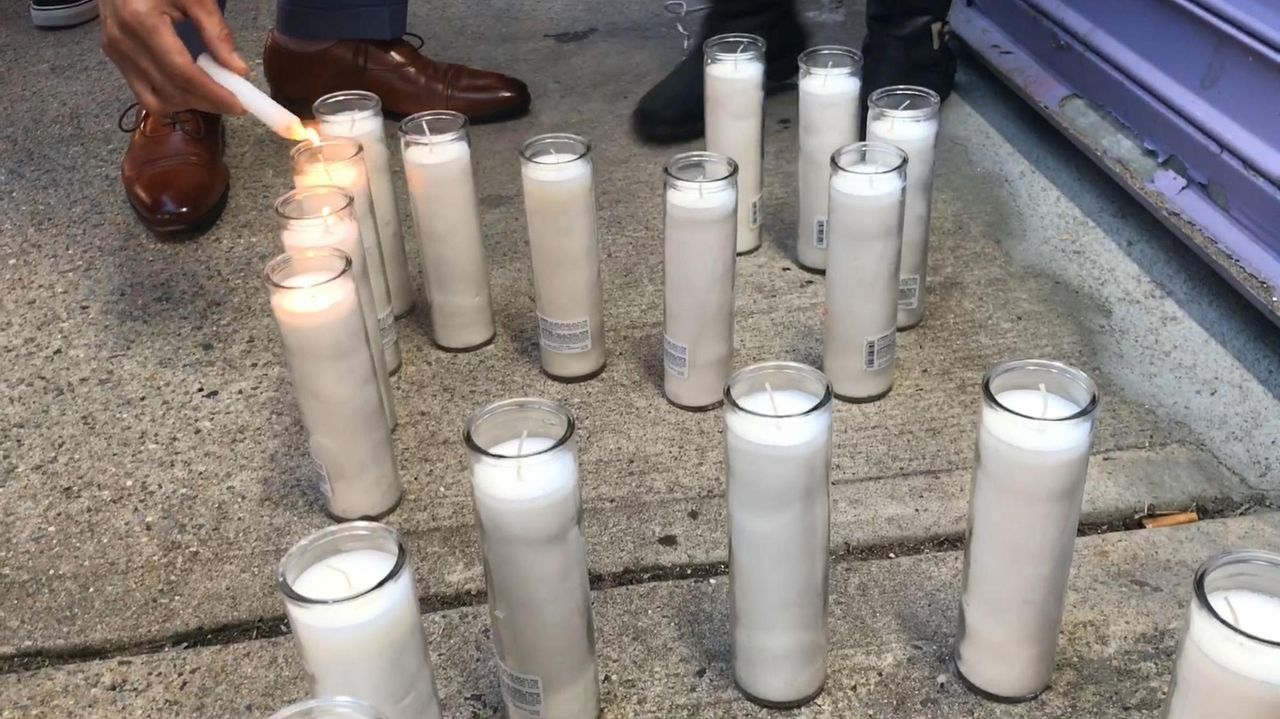 Guerlyne Felix speaks Wednesday at a vigil in Queens for her son Matthew Felix, 19, who was fatally shot near his home by Nassau County police after a car chase.   Credit: Newsday / Matthew Chayes

Memorial candles were lit Wednesday on a Queens street to celebrate the 20th birthday of Matthew Felix, a carjacking suspect shot dead there last week by the Nassau police after a brief pursuit.

His mother, Guerlyne Felix, said her son's death was emblematic of how black people are mistreated with impunity by the law enforcement.

“Today my son would have been 20, and instead of him out there celebrating … he’s in the morgue," Felix said. "…Those cops just came in [to] Queens and executed my son. There was no justification.”

The Nassau police department has released few details about the Feb. 25 shooting of Matthew Felix other than he was suspected in a Garden City Park carjacking earlier in the day and officers tracked him to his Cambria Heights home that afternoon. Nassau police officers attempted to arrest him after he left his home and got into a car that was not the stolen vehicle, according to the department.

Nassau police spokesman Det. Lt. Richard LeBrun wrote in an email Wednesday: "Our officers last week were on duty and investigating the subject for an armed carjacking who had a lengthy criminal record that involved shooting another person and a weapons charge.”

Since at least 2006, Nassau police investigations have determined that all incidents in which an officer used deadly force and someone died were justified, according to LeBrun.

State Attorney General Letitia James took over the case last week, according to her spokeswoman Delaney Kempner. James has invoked a 2015 executive order granting the office jurisdiction when police kill an unarmed civilian or there is a significant question whether the civilian was armed and dangerous,

In an emailed statement Wednesday James said: “I extend my deepest condolences to the family of Matthew Felix and … my office will be investigating the incidents surrounding his death. As with every investigation, we will follow the facts of this case and work tirelessly to provide the transparency and accountability that all our communities deserve.”

At Wednesday’s ceremony, activist Kirsten John Foy, who has protested killings by NYPD officers, including the 2014 chokehold death of Eric Garner, said of the Felix case: “This is an unprecedented act of aggression by a police department that we have not seen in the City of New York, and we are not going to allow this precedent to stand.”

E. Reginald Pope, president of the Nassau chapter of Al Sharpton’s National Action Network, pointed to recent cases involving young black men and police in Nassau County. One involved the Tillery brothers, Roosevelt teens whose family has said were beaten in January by Nassau police and wrongly detained. The other case cited by Pope involved Akbar Rogers, the Freeport man whose December arrest was captured on cellphone video as officers appeared to punch him in the face, head and elsewhere on his body as he writhed on the ground in handcuffs and yelled for help.

Foy Wednesday led the protesters in a call-and-response chant of “What do we want? Justice! When do we want it? Now!”

“Where we gonna get justice?” Foy asked. Only a few people answered, “Nassau.”

Said Foy: “Some of ya’ll don’t sound too sure."

Nassau School Notebook: Great Neck South wins Science Bowl
Way to Go! Mineola senior launches college help website
Cuomo: NY pushing toward reopening, agreeing to limit COVID-19 powers
How to get a COVID-19 vaccine appointment
2:29 Looking back one year, 'I see that I am one of the lucky ones'
Alzheimer's Association hosting free virtual seminar on legal, financial planning
Didn’t find what you were looking for?