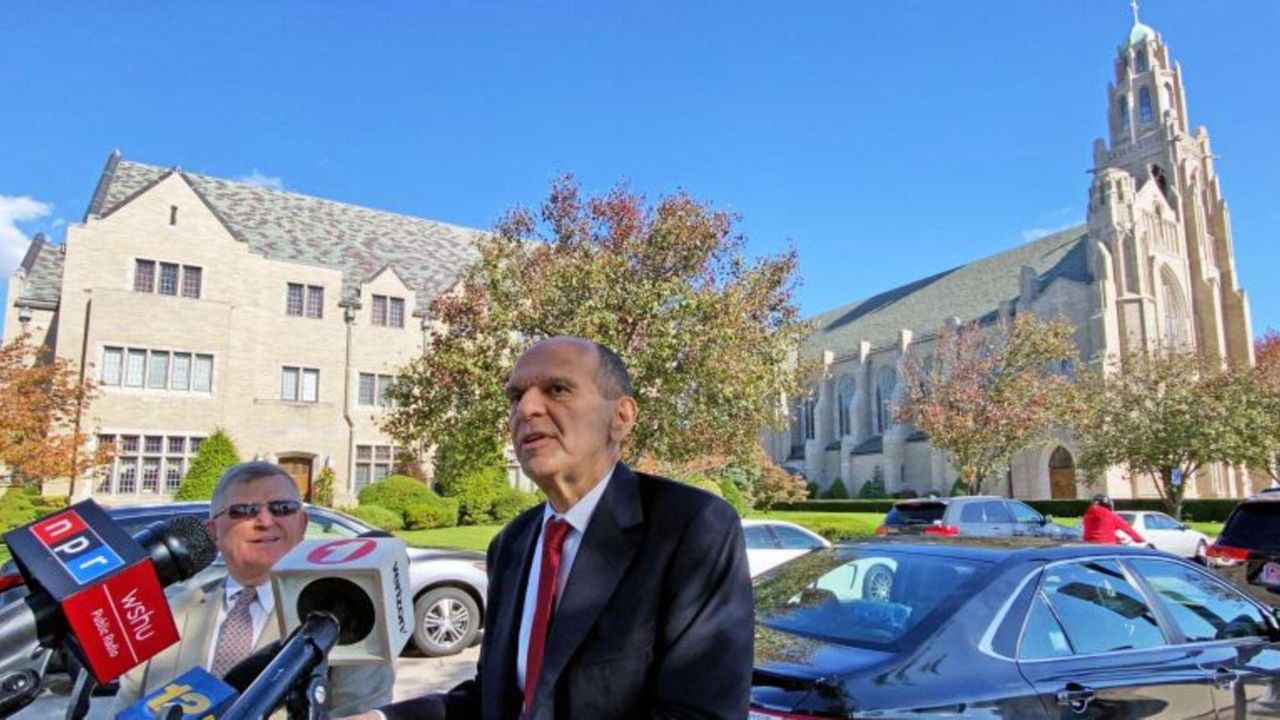 Two women and a man have filed civil complaints in state Supreme Court that accuse the late Bishop John McGann of sexually abusing them when they were children, their lawyer Mitchell Garabedian said Wednesday at St. Agnes Cathedral in Rockville Centre. Credit: Howard Schnapp

Two women and a man have filed lawsuits that accuse the late Bishop John McGann of sexually abusing them when they were children, their lawyer said Wednesday.

Each of the three lawsuits is seeking unspecified damages from the Diocese of Rockville Centre, the nation's sixth-largest with 1.5 million members, and St. Agnes Roman Catholic Church, the local parish where some of the abuse allegedly happened.

In a statement, the diocese said Wednesday it is cooperating with law enforcement and the legal system on the McGann case and others, but also noted that the allegations date to 1961 and "involve alleged acts of persons who died many years ago and thus are unable to defend themselves. "

The alleged abuse took place in the 1960s and 1970s, the lawyer, Mitchell Garabedian, said at a news conference outside St. Agnes Cathedral, the diocese's seat.

The plaintiffs are all now in their 60s and no longer live on Long Island.

“It’s time to lift the veil. It’s time for honesty. It’s time for truth. The evil must end," said Garabedian, who has represented hundreds of clergy sexual abuse victims in the Boston area and elsewhere.

At the time of the alleged abuse, McGann was a monsignor serving St. Agnes parish, the diocese's seat. He became the diocese's second bishop in 1976 and served until his retirement in 2000. McGann died at age 77 in 2002.

Garabedian made the allegations public in February; he filed the lawsuits Tuesday in State Supreme Court in Mineola under the New York State Child Victims Act, which allows a one-year period for abuse claims to be filed regardless of how long ago the abuse occurred.

Among the three alleged victims, Garabedian said there were a total of about 20 incidents of abuse by McGann. Two lawsuits each also allege abuse by Msgr. Edward L. Melton; the Rev. Robert L. Brown, a priest at St. Agnes; and John H. Hanlon, a janitor at the church.

Speaking by phone from Minnesota, Joanne Jack alleged that McGann abused her when she was 11 at a Christmas party in 1967 in the St. Agnes rectory. She said McGann and other priests were drinking at the party, and were seated around a table.

The lawsuit states Joanne Jack is “unable at this time to fully describe all of the details of that abuse and the extent of the harm she suffered as a result.“

She said she ran out of the room after the alleged abuse and "I never ever went back anywhere near that place."

The alleged attack "followed me throughout life, the guilt and the shame, the unworthiness, that comes with this kind of thing."

Alexander Jack alleges McGann started abusing him around 1963, when he was 10 years old. There were at least four incidents, the lawsuit states.

Silvestre alleges McGann started sexually abusing her in 1966 when she was 10. The alleged abuse, which lasted five years, occurred in the St. Agnes rectory and basement, and in her family’s homes in Rockville Centre and Hampton Bays, according to the lawsuit.

Silvestre also alleges she was at the same Christmas party with Joanne Jack, and was abused there by Brown and Melton.

Joanne Jack and her brother also allege in the lawsuits that they were sexually abused by Hanlon. Alexander Jack alleges abuse by Brown, as well.

The Jacks and Silvestre were parishioners at the parish, and the two women attended its school, the lawsuits state. Silvestre's mother worked as a secretary at the parish.

Joanne Jack said she decided to go public with her allegations after a friend showed her an article about a clergy sex abuse victim speaking out,

“I always remembered what happened, but the guilt and the shame prevented me from speaking up," she said.

The diocese, in its statement, said that for more than 15 years through its Child Victims Assistance Program it "has strengthened our efforts toward child protection, abuse prevention and pastoral outreach to survivors."

The diocese said it has also received claims of clergy sex abuse from nearly 400 victims since 2017 through its Independent Reconciliation and Compensation Program, and paid out more than $50 million in compensation — with many claims still pending.

"The Diocese of Rockville Centre is fully committed to the protection of minors, and undergoes an annual independent audit to evaluate compliance with required child protection practices," the statement said.