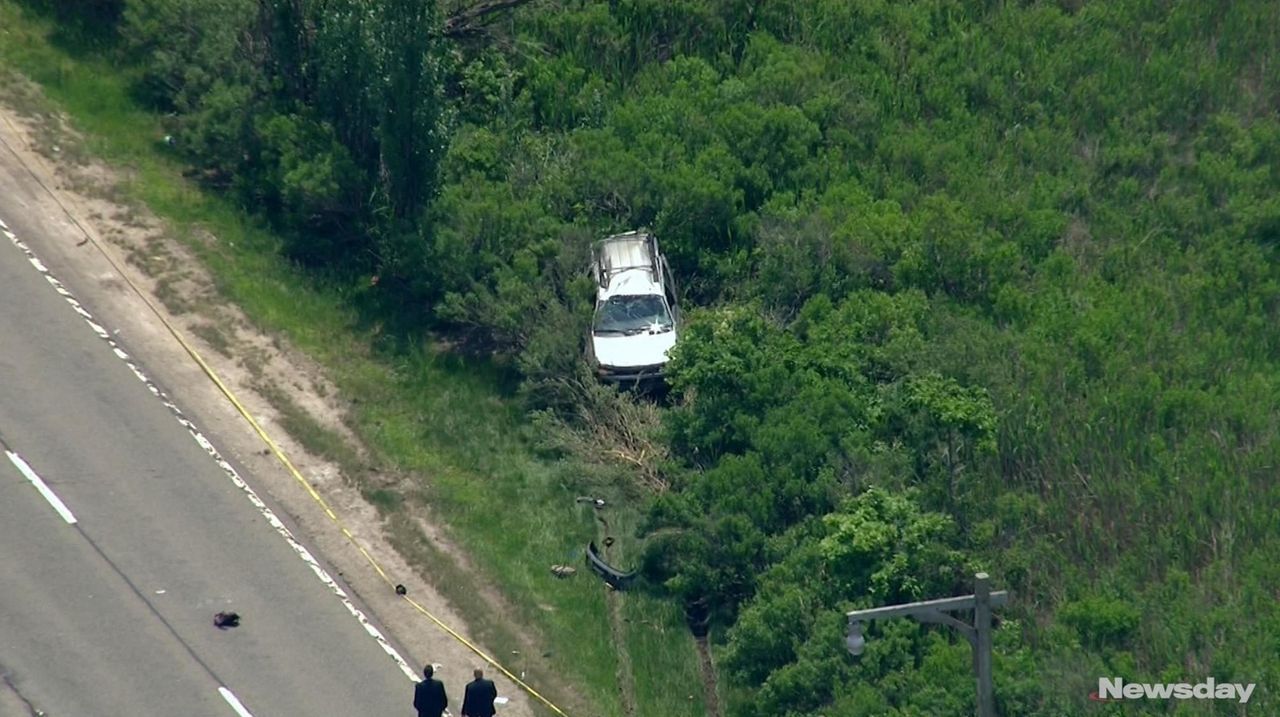 The driver’s brother, David Sanchez, 13, died, along with the son of the vehicle’s owner, Marlon Carbajal, 15, and another teenager, Herbert Leo Avilles-Maravilla, 16, said State Police Investigator Brad Molloy. He said they were not wearing seat belts and were ejected.

Six other teenagers in the SUV, along with the driver’s 18-month-old child, were injured in the single-vehicle crash about 11:40 a.m. south of Merrick Road in Freeport, police said. The teenagers, ages 13 to 17, are from seven Uniondale families and were headed to Jones Beach, State Police said.

The southbound vehicle was “driving at a high rate of speed and weaving in and out of traffic” when it overturned several times, landing in the marsh along the parkway’s west shoulder, State Police Maj. David Candelaria said.

The 2005 Chevrolet TrailBlazer had been reported stolen from the owner’s Uniondale home Thursday evening, but the owner did not know his son had taken it, Molloy said.

Authorities said one of the passengers who died was found on the roadway and the other two in knee-high brush. Two were pronounced dead at the scene and another at an area hospital, police said.

In an online post, the Uniondale school district said grief counselors will be available at the high school and by phone from 9 a.m. to 1 p.m. Saturday and Sunday and also when school resumes next week.

The district is “heartbroken over the tragic loss of young lives from our community,” the message said. Condolences were extended to the families of the students who died, along with wishes for a speedy recovery to the injured.

State Police said the seven survivors, including the driver, suffered non-life-threatening injuries and were conscious and alert as they were taken to hospitals. Because the toddler was not seriously injured, investigators believe the child was in a car seat.

The child’s mother was cooperating in the investigation and was admitted to the hospital with a fractured elbow, police said.

The minimum age for a driver’s learning permit is 16, State Police said.

Candelaria said it appears the speeding driver veered to the left and overcorrected, causing the SUV to overturn several times before it landed on the side of the parkway.

The SUV was not being pursued at the time, and there was no indication it was racing or involved in a road rage incident, police said.

“Witnesses traveling in the same direction . . . said the vehicle ‘came up behind me at a high rate of speed and swerved around me,’ ” Candelaria said. “So our collision reconstruction unit will investigate the collision and determine causation, speed and things of that nature.”

Drugs and alcohol were not immediately found at the scene, Candelaria said.

The teenagers had decided Friday morning to go to the beach and were picked up in the SUV, Molloy said. Investigators are working with the Uniondale school district to determine if they were at school at some point Friday or had finals, he said.

“Our Vehicular Crimes [assistant district attorneys] were at the scene and participating in this multiagency investigation that is being led by the New York State Police,” said Miriam Sholder, a spokeswoman for Nassau District Attorney Madeline Singas. “It is a terrible tragedy and our condolences are with the families of the deceased.”

With Nicholas Spangler and Chau Lam

CORRECTION: A previous version of this story gave an incorrect age for the injured toddler. It was corrected based on updated information from the New York State Police.