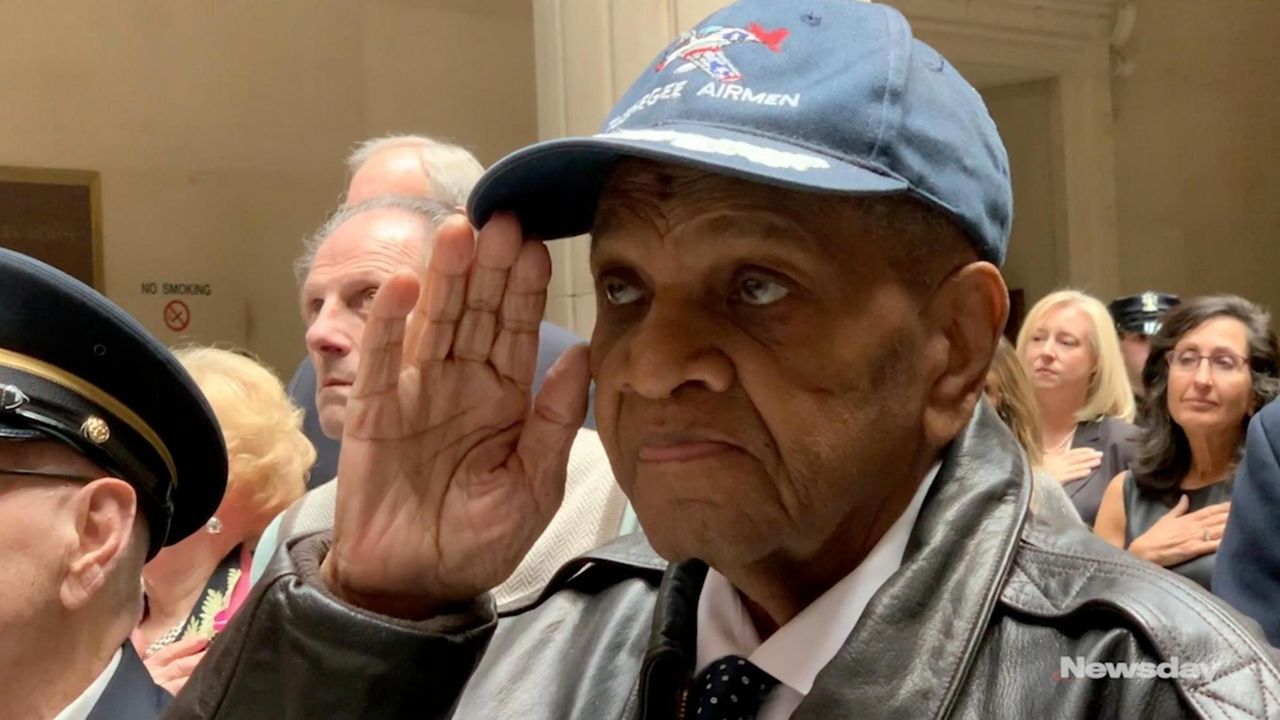 A Memorial Day ceremony was held on Wednesday at the Nassau County Courthouse where County Executive Laura Curran paid tribute to veterans and gave special recognition to the 75th anniversary of D-Day.  Credit: Howard Schnapp

At a pre-Memorial Day ceremony Wednesday at the Nassau County Courthouse rotunda, court employees honored the spirit of military service as embodied by attendees who shared stories of sacrifice, courage and heroism.

Among those recognized at the ceremony: survivors of the allied invasion of France during World War II; a woman whose 21-year-old son died in Vietnam on Memorial Day 1968; and a man who helped pioneer the integration of the United States military.

Federal Eastern District Judge Arthur Spatt, who survived a kamikaze attack while serving as a crew member aboard a ship that ferried U.S. troops during the WWII invasion of Japan’s Okinawa Island, was the keynote speaker before an audience of more than 100 people. His remarks were frequently interrupted by applause.

He recalled growing up in his native Brooklyn and witnessing a nation united by the twin threats posed by Nazi Germany and Imperial Japan.

“Walking the streets I saw gold stars in the windows,” he said, referring to the symbol associated with households that have lost a relative while serving in the military. “Everyone responded to war."

Spatt, 93, recalled the sense of purpose among Americans while he was overseas.

“Everyone was working for a common goal,” he said. “When has that ever happened in this country — before or after World War II?”

The two-hour commemoration was organized by Nassau District Attorney Madeline Singas, as well as the Office of Court Administration, the statewide group that oversees New York’s courthouses.

Memorial Day, a federal holiday observed on the last Monday in May, honors men and women who have died while serving in the U.S. armed forces.

The honorees also included Gold Star mother Dorothy Oxendine, Tuskegee Airman William Johnson, who was among the first black Americans allowed to train as an Army aviator, as well as Anthony Catalano and Vincent DeMartino, both of whom survived battles in France after the D-Day invasion.

Catalano and DeMartino, who both arrived months after the June 6, 1944 invasion of the coast of France, said they owe much to the thousands of Allied troops killed on the legendary beach assault's first day.

“I was young, so it really didn’t sink in immediately — the carnage that happened on the beach,” said DeMartino, 93, of Floral Park.

He said it was only a few years ago that he returned to visit the wide, flat Normandy beaches where Allied troops waded ashore amid torrents of machine-gun fire.

“You only realize now what they went through,” DeMartino said.

Catalano, 98, of Mineola, expressed similar emotions and said had he been part of the initial invasion, he was certain he would have never made it home alive.

“I can’t swim," Catalano said, "so I know I would have gone straight down like so many of them did."

The ceremony also recognized the Gold Star families of three people who died while serving in the military, and a fourth, Virginia Cervasio, of Glen Cove. Her son, Angelo Cervasio, committed suicide in 2006, after struggling following his return from combat in Iraq.

Oxendine, a Farmingdale resident, is a former national president of American Gold Star Mothers, an organization of women who have lost a son or daughter while in the military.

She said the loss of her son, Marine Pfc. Willie F. Oxendine III, who was killed on May 30, 1968 in Vietnam’s Quang Tri province, still tugs at her. But commemorative events like the one she attended Wednesday bring her a measure of comfort, Oxendine said.