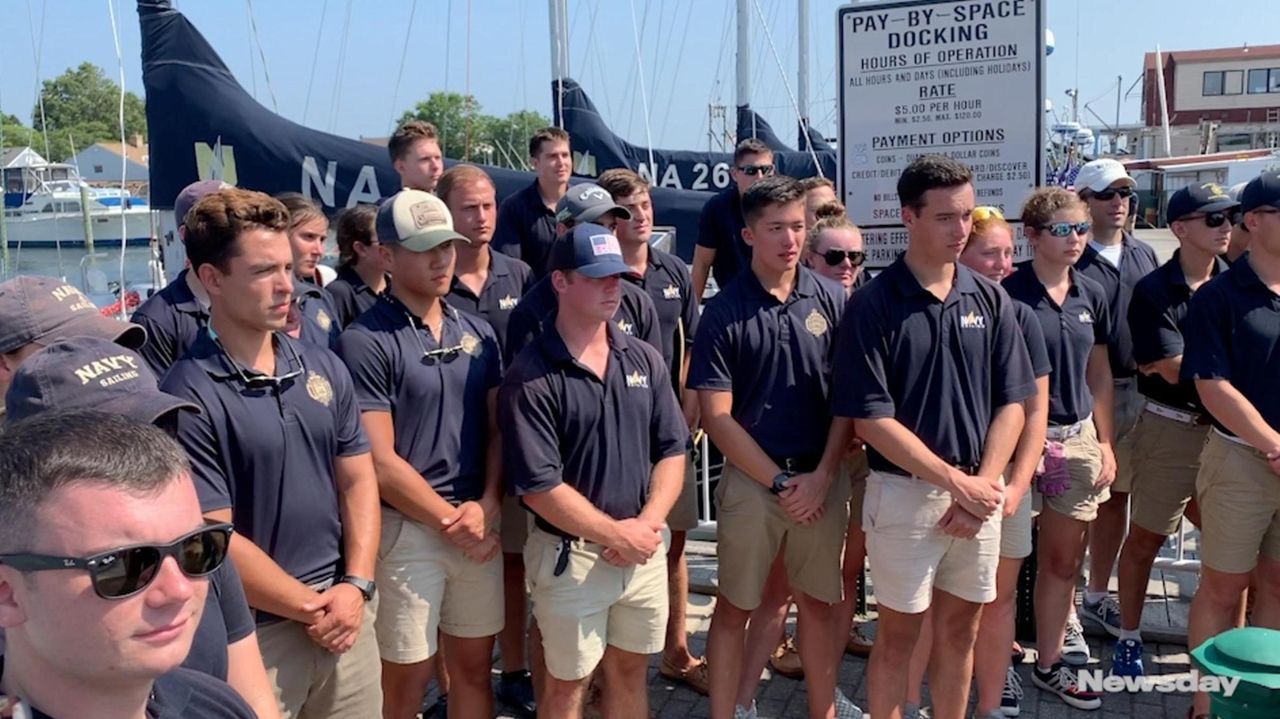 On Thursday, Freeport Mayor Robert Kennedy spoke at the Nautical Mile Esplanade about the arrival of students from the U.S. Naval Academy, who will be staying in the village through Saturday.    Credit: Howard Schnapp

Five sailboats, sails folded and loaded with midshipmen from the U.S. Naval Academy, motored up Woodcleft Canal and docked along the Freeport Nautical Mile Thursday.

The 50 students had made their way up the canal around 2:45 p.m., almost three hours behind schedule. They navigated the 65-foot-tall, 44-foot-long ships into village-owned slips, where they’ll stay through Saturday, open for public viewing.

For 21 summers, Freeport has opened its community to the midshipmen, who sail 280 miles up the Atlantic coast from the academy in Annapolis to Long Island as an exercise.

“It’s good experience for them to travel up through the ocean and have a good inlet to come to,” said Freeport Mayor Robert Kennedy, a U.S. Navy veteran, who was on hand along with other officials and community members to greet the group. “They get used to navigation and troubleshooting and steering.”

After a brief welcome message headed by Kennedy, the students were served sandwiches and chips by the U.S. Naval Academy Parents Club of Long Island.

Freeport Air Force veteran Joe Brendel also presented them with a gift — a poem he read that was written by a friend and fellow veteran in remembrance of Pearl Harbor. It was handwritten over a black and white photo of the Hawaiian port, and signed by its author.

John Formisano, who is with the academy's officer training command, said he has been volunteering for the program since 2012. “I have a choice every summer to go somewhere. I keep coming back to Freeport because of you, because of the way you treat the midshipmen and how welcome you make us feel,” he told the gathering.

The midshipmen will be in Freeport through Sunday, where village officials said they were free to explore, take advantage of the local recreation center, or travel into Manhattan for the day. Each midshipman was given a $20 coupon from the Freeport Chamber of Commerce.

Chamber president Jenny Jorge said having the midshipmen and their vessels in and around town draws visitors to the Nautical Mile.

With help from other local organizations — the American Legion William Clinton Story Post 342, the local VFW and the Naval Parents Club — all 50 midshipmen are put up in a local hotel for two nights. The village will also host them for a Saturday afternoon barbecue before they head back to Annapolis Sunday.