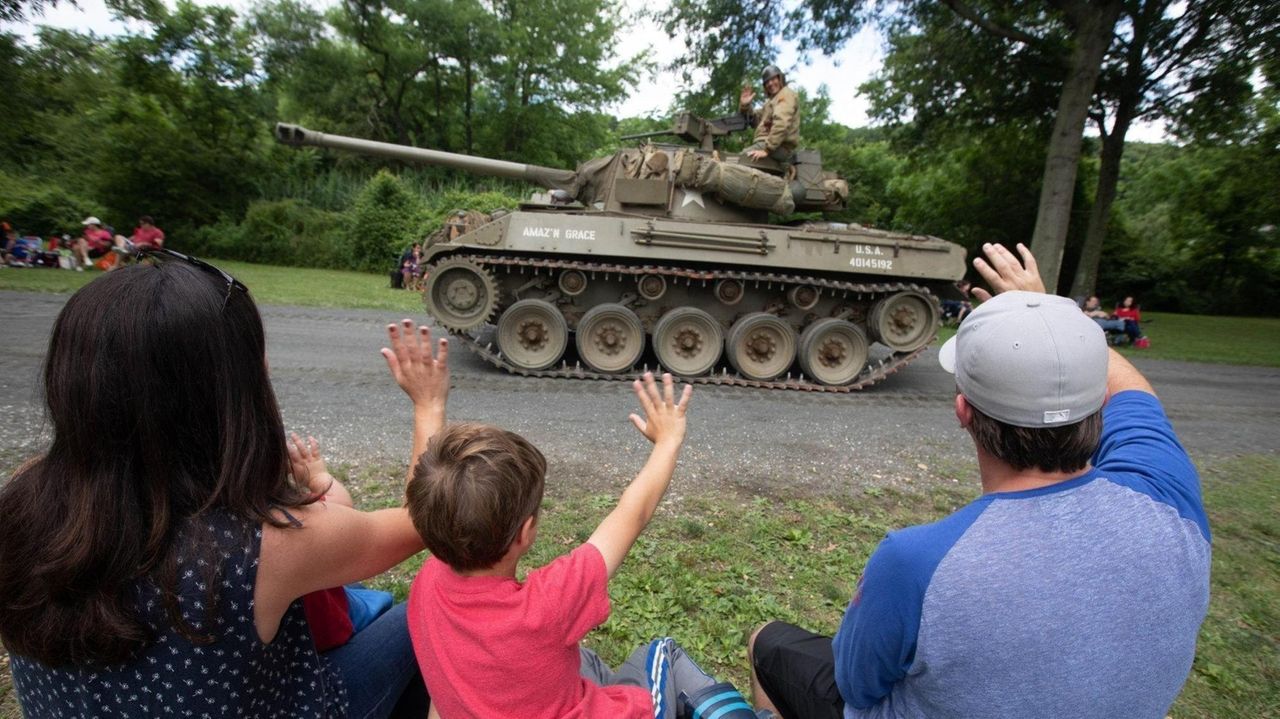 Richard Oreiro and his family came to the Old Bethpage Village Restoration to witness people march in celebration of Independence Day.

What they found, he said later, was "not your typical parade."

The Oreiro family from Commack and other spectators saw a line of vintage military vehicles from the Museum of American Armor in Plainview, including an M18 Hellcat Destroyer tank used during World War II.

Some 20 vehicles drove through of village dirt roads on Sunday at the museum's second annual July Fourth armor parade, following last year's in which spectators were kept socially distant during the pandemic.

Vehicles included an M48 Patton tank, which was named after Gen. George S. Patton, commander of the U.S. Third Army in World War II, along with a V-100 Commando made in the 1960s and used to protect truck supply convoys.

Oreiro's son, Branden Oreiro, 8, learned during the parade that soldiers who drove the tank during combat had another way to free themselves in case of an emergency besides going through the top.

"I never knew there was an escape hatch at the bottom of the tank," Branden said. "I like all the tanks."

Kevin Carroll, community affairs director at the museum, who told stories over loudspeakers about the history of the vehicles driven, said he wanted to illustrate "what American veterans have done for us, particularly today."

That includes, Carroll of Huntington Station said, "the people that fought for us to get our rights and maintain our rights through numerous wars, from obviously the Revolution to today."

Spectators lined up along the parade route as the tanks came around, driven by volunteers, who dressed as soldiers did during the battles in which the tanks were used. About 600 people attended the parade, said museum spokesman Gary Lewi.

Anthony Vale, originally from Holtsville, said he was portraying a soldier in the Second Armored Division, 41st Infantry Regiment, that served during World War II in the Europe Theater of Operations, because he loves talking about history "especially people who paid the ultimate sacrifice in World War II . . . a lot of freedoms that we have today are because of that."

Gladys Lumagui of Valley Stream arrived at the parade and said she felt as if she was "back in the World War."

"It was a great opportunity knowing the history and in celebrating the Fourth of July," she said.

Mike Vassallo of Yaphank, who said he retired from the military in 1997 after serving in the Air Force, enjoyed the parade because oftentimes "what we tend to forget and take advantage of, we need to keep alive and this is part of that, restoring all these old tanks, restoring the old aircraft at the museums."