The collision was the latest in a spell of recent safety incidents on the LIRR.

Friday’s collision happened around 12:30 p.m., said Mineola Mayor Scott Strauss, who was briefed by village fire department officials responding to the scene. They tended to a worker who suffered a neck injury, Strauss said. 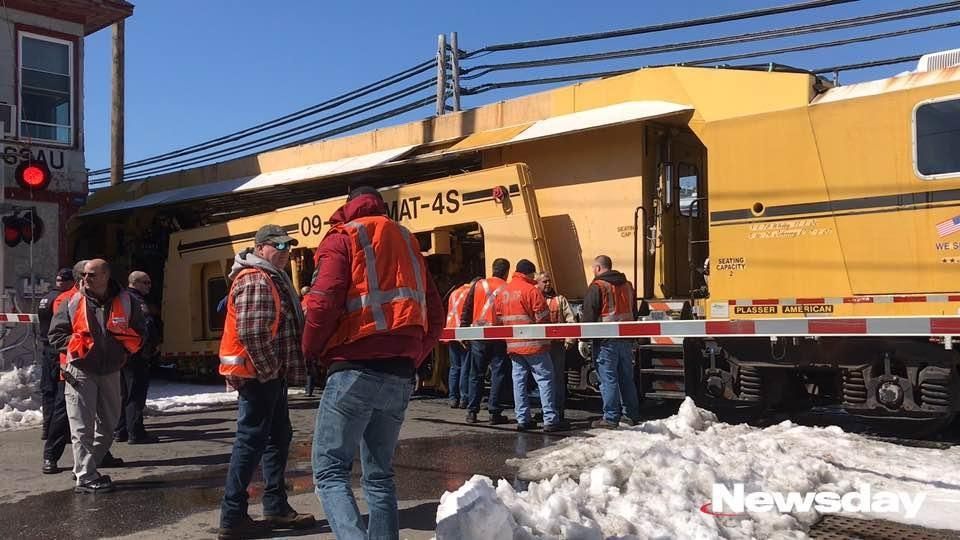 Fire officials confirmed one person was taken to Winthrop-University Hospital. Strauss said the worker was in stable condition.

An LIRR spokesman, by email, confirmed one worker suffered minor injuries “after two track maintenance vehicles came into contact.” He added that no customers or passenger trains were involved.

With one train disabled on one of the two Main Line tracks, delays and cancellations soon mounted and lasted through the evening rush hour. “LIRR service is operating on or close to schedule in both directions through Mineola,” the railroad announced in a 9:03 p.m. alert.

Mike Slapo, a commercial real estate lawyer in Manhattan, was trying to get on a train to Hicksville. He couldn’t get the 4:53 p.m. or the 5:01 p.m. trains because of cancellation or overcrowding.

“Delays are almost a daily occurrence” on the LIRR, he said. When the platform for the 5:17 p.m. train to Hicksville was announced, Slapo stopped the interview and ran for the train.

The railroad announced it had cleared the disabled train around 5:45 p.m. and restored full service on both tracks. But the delays, which grew to up to 45 minutes on the Port Jefferson, Oyster Bay and Ronkonkoma branches, lingered throughout the evening commute.

Adam Lombardi, who works in downtown Manhattan at the National Urban League, was hoping to get home to Flushing, Queens, for a St. Patrick’s Day dinner.

The 5:30 p.m. train to the Auburndale Station on the Port Washington branch was canceled and Lombardi, 32, was hoping to get on the 6:10 p.m. train.

“I hope when I get home, it’s not cold,” he said of the meal, adding his wife texted that she’d keep his dinner warm.

Lombardi emailed later that he gave up on the LIRR train, which ended up being canceled, opting for the more time-consuming E train and a bus.