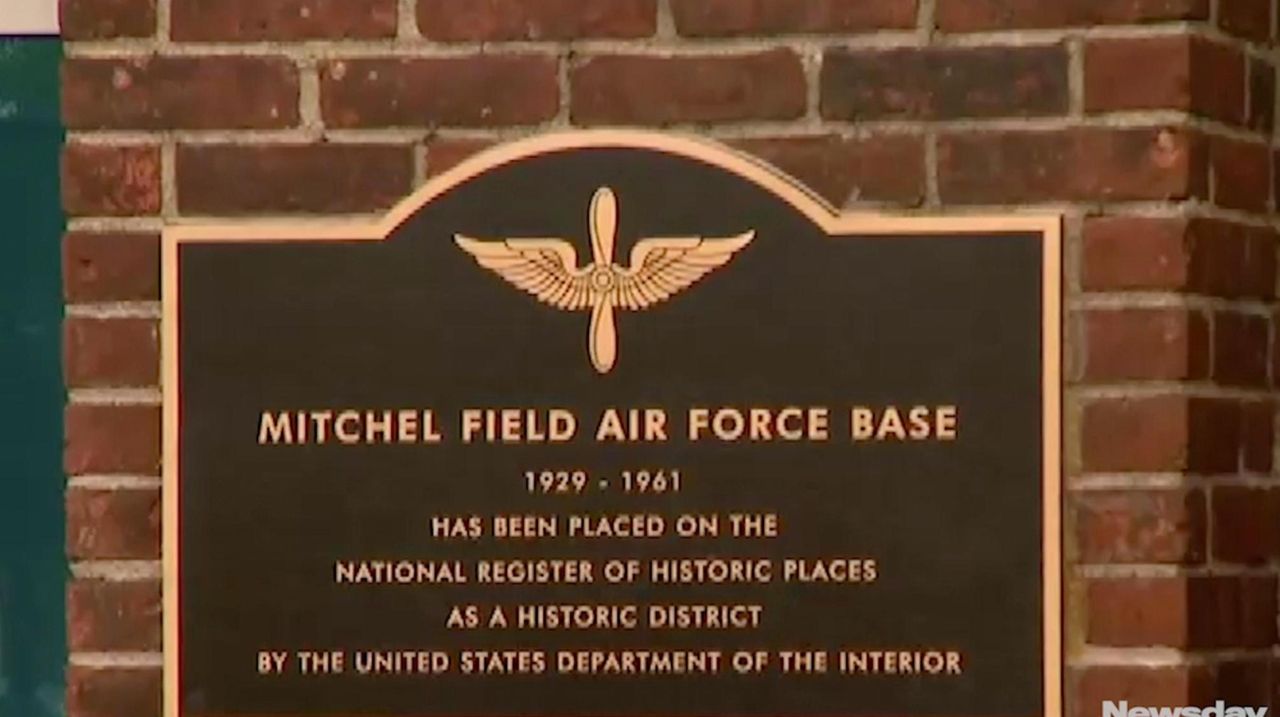 Mitchel Field in Uniondale, one of the most significant aviation hubs during the first half of the 20th century and the main point of air defense for the East Coast during World War II, has been added to the National Register of Historic Places.

The designation, which officially lists the site as Mitchel Air Base and Flight Line, will allow Nassau County and the Cradle of Aviation Museum, which is located on the site of the historic air base, to apply for tax credits and state grants to preserve and restore Mitchel Field's existing 110 buildings, officials said during a news conference Monday.

"What happened here over the past century really changed the course of history throughout the entire world," said Nassau County Executive Laura Curran.

Gary Monti, director of museum operations at the Cradle of Aviation, said he began applying for the designation four years ago. The museum has repurposed some of the existing Mitchel Field buildings and is applying for grants for others, he said.

The state approved the designation March 21, and the National Park Service added the air base to the official list of historic locations deemed worthy of preservation on May 4.

During World War I, aviators trained at Mitchel Field, named after John Purroy Mitchel, the second youngest mayor of New York City, who later died in the war.

Mitchel Field was the scene for several legendary aviation moments, including world speed records and was the starting point for the first nonstop transcontinental flight in 1938 by Army B-18 bombers. In 1952, President-elect Dwight D. Eisenhower took off from Mitchel Field en route to South Korea, fulfilling a campaign promise.

The facility later expanded to become a critical East Coast staging area during World War II as the headquarters of the First Air Force, the Air Force's Northeast District and the Air Force Reserve.

"Mitchel Field was the last glimpse ... for those soldiers who left to go to Europe," said Wayne Horsley, Long Island regional director for the state Office of Parks, Recreation and Historic Preservation. "And just think of those boys coming home. This was the first thing they saw when arrived back in the United States after a long, hard-fought war."

Rep. Peter King (R-Seaford) said, "Long Island was a major center in winning World War II ... And Mitchel Field is really where it all began."

But noise, small size of the field and safety concerns made maintaining an Air Force base in the populated area unsustainable.

In 1943, a P-47 Thunderbolt crashed into Hofstra University's Barnard Hall and by 1949, Mitchel Field was relieved of the responsibility for defending New York's air space. By 1961, the base was closed to flying and the land turned over to Nassau for development.

Roughly 108 acres of Mitchel Field's original 1,170 acres — once dominated by runways, air fields and taxiways — remain intact, including three of five hangars, a firehouse, two maintenance buildings once used for aircraft assembly and machine shops, military housing and a commissary.

"In Nassau County, with all the suburbanization, subdivisions and shopping malls, this place survived," Monti said.

A total of 31 original Mitchel Field buildings are on the campus of Nassau Community College. Five of those buildings, officials said, including a former communications facility and convenience store, are currently undergoing construction and are being repurposed by the college.

CORRECTION: The site listed as Mitchel Air Base and Flight Line is in Uniondale. A previous version of this story included an incorrect location.

Cops: Woman crossing street struck and killed by SUV
Study to examine cost to connect Great Neck homes to public sewer
2:38
What will summer look like on Long Island? Here's a preview.
Woman killed in house fire, police say
NY health officials: Students can be 3 feet apart in classrooms
Brown: One toke over the (town) line
Didn’t find what you were looking for?