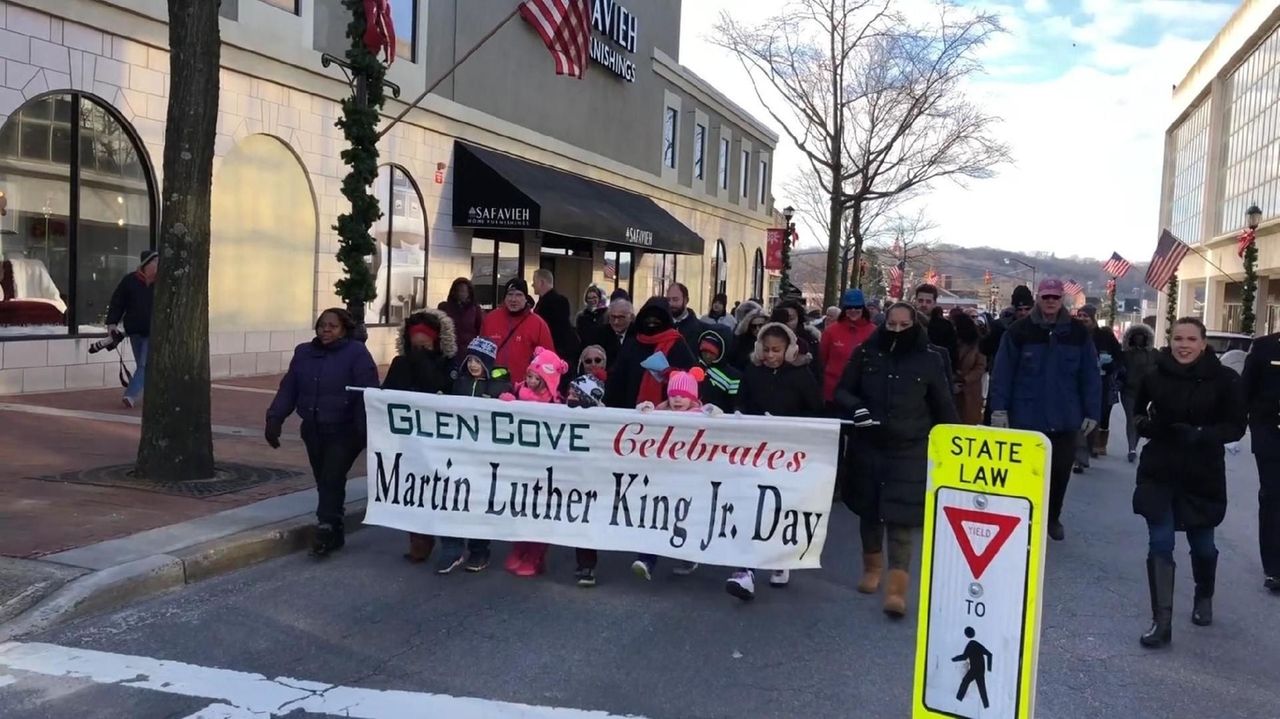 On Monday, Jan 15, 2018, hundreds marched in the streets of Glen Cove to honor The Rev. Martin Luther King Jr. A ceremony was held at Robert M. Finley Middle School to commemorate the theme of this year's presentation, "50 Years - Still Striving Together." Credit: Howard Schnapp

During a ceremony in Glen Cove honoring the Rev. Martin Luther King Jr., Michael Burnett knelt while audience members stood and recited the Pledge of Allegiance and sang the national anthem.

Burnett, 50, an emergency room technician and a father of two, was among the marchers who walked Monday from the First Baptist Church of Glen Cove to Robert M. Finley Middle School for the ceremony.

“Until that flag represents everyone, regardless of creed, race, or religion, then I’ll stand for it,” Burnett said afterward. “Right now, that flag does not represent me as a black man.”

More than 100 men, women and children — some of whom walked three-fourths of a mile in the symbolic march, the 34th annual local tribute to the slain civil rights leader — joined Burnett at the school to remember King and to celebrate his accomplishments.

“It’s been 50 years and the struggle is not over,” said one of the speakers, Glen Cove High assistant principal Allen Hudson III. “Dr. King’s dream of equality and justice for all has not been fully realized.”

“We were going in the right direction, but our president is trying to turn this country around to the way it used to be,” Johnson said. “When I think of President Trump and the direction that he’s going in, it reminds me of early Nazi Germany. And, we have to fight and remind people of those who suffered and who died to make America.”

Citing what he called ongoing efforts to prevent African-Americans from exercising their right to vote and mass incarceration of black men as examples of struggles that King fought against, Burnett said those struggles continue today.

“Everything Dr. Martin Luther King stood for, they’re turning back. They want us to live in the ’60s again,” he said.

“We are all still dreaming,” Burnett said.

11 photos of Martin Luther King Jr.'s visits to Long IslandMLK visited Long Island on several occasions, including the month before he was assassinated.