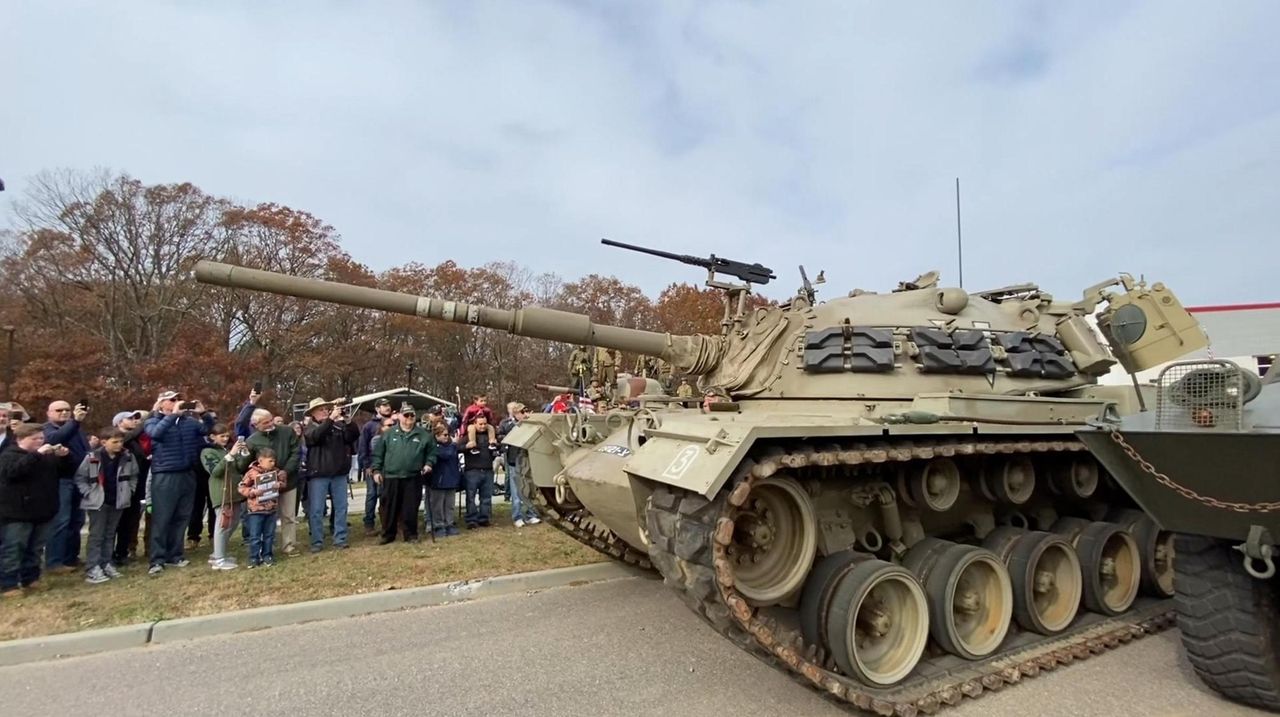 A World War II M4 Sherman tank, M47 Korean War-era tank and M60 Patton tank joined a collection of more than 40 military vehicles at the Museum of American Armor in Old Bethpage on Sunday. About 30 re-enactors wore World War II-era uniforms as nearly 200 spectators huddled around the three tanks in a Veterans Day event to honor those who served and made the ultimate sacrifice. Credit: Howard Schnapp

It wasn’t until years later that Steven Bennett of East Northport learned the helmet and rifle he played with as a child belonged to a German soldier who shot his grandfather, Mathew Dau, in Belgium, just a few months before World War II ended in 1945.

“He ended up waking up and shot the sniper that shot him,” Bennett said. Without knowing it, “me growing up, I was wearing that guy’s helmet and his rifle playing in the backyard.”

To this day, Bennett, 38, keeps the helmet and the gun at home.

“If that guy’s bullet went one inch to the right, my family wouldn’t exist,” the NYPD sergeant said. “It just symbolizes what [my grandfather] had to go through — he got shot for this country and for survival.”

Bennett was one of about 30 re-enactors wearing World War II-era uniforms Sunday as nearly 200 spectators huddled around three newly dedicated tanks at the Museum of American Armor in Old Bethpage in a Veterans Day celebration to honor those who served and made the ultimate sacrifice.

The three tanks — a World War II M4 Sherman tank, an M47 Korean War-era tank and an M60 Patton tank — were recently added to the museum’s collection of more than 40 military vehicles on display.

“Each one can tell a story of courage, valor and sacrifice,” said Kevin Carroll, the museum’s community affairs director. “Each one represents a chapter of our history that needs to be retold. …"

In front of a solemn crowd, 96-year-old Richard Gruber, a World War II veteran from Commack, tolled a bell as Nassau County Executive Laura Curran read out wars in which Americans fought and died.

Curran called the museum, which opened to visitors in 2014, a “real jewel in our crown” as it serves as a classroom to educate the younger generation of the nation’s history.

To Christian Fries of Hicksville, who turns 17 on Veterans Day, Monday is about celebrating his 73-year-old grandfather Joseph Feeser, who served in Korea in 1966 in the Korean DMZ Conflict. The family plans to have a meal together, during which cake will be served.

"I used to watch History Channel with him," the teenager said as he stood next to Feeser inside the museum. "I just got hooked. … All these real GIs always had their own personal stories, funny [or] sad, and it always changed or inspired them to keep going."

To Bennett, Monday is a day to remember the sacrifice made by his grandfather's generation.

“He was my hero,” said the father of a 2-year-old boy and a 1-month-old girl. “I just want to teach the next generations to not forget what their great-grandparents fought for.”

CORRECTION: An earlier version of this stroy misidentified the conflict Joseph Feeser fought in. He is a veteran of the Korean DMZ Conflict, often referred to as the Second Korean War, in 1966.