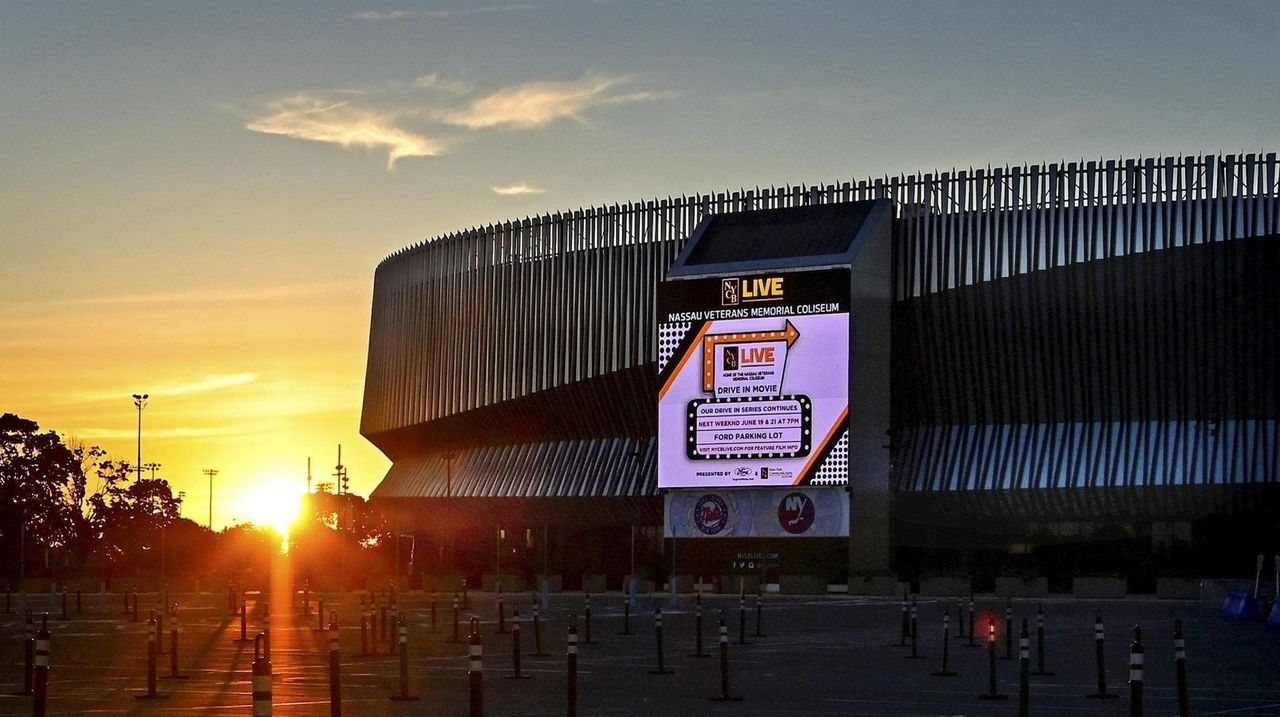 Nassau Coliseum is shutting its doors, with its operator looking for investors to take over the lease. An Islanders fan reflected Tuesday on his many years spent in the stands. Some are optimistic that this isn’t the end of the Long Island staple. Here’s the latest with Cecilia Dowd in Tuesday's daily coronavirus wrap-up video. Credit: Newsday staff

This story was reported and written by Jim Baumbach, Robert Brodsky and Candice Ferrette.

NYCB Live's Nassau Coliseum will shut its doors indefinitely as billionaire operator Mikhail Prokhorov seeks investors to take over the lease of the 13,000-seat venue and assume the remaining $100 million in debt, a Prokhorov spokeswoman said Tuesday.

The stunning development by Prokhorov’s Onexim Sports and Entertainment, which runs the Coliseum through a lease from the county, comes three months after the arena, along with all other sports and concert venues across the state, closed amid the coronavirus pandemic.

Prokhorov's decision raises questions about the future of the $1.5 billion Nassau Hub development and is expected to send the Islanders back to Brooklyn's Barclays Center instead of playing their final season on Long Island before their new arena at Belmont Park opens.

Ellen Pinchuk, a spokeswoman for Prokhorov, said in a statement Tuesday that the "enormous long-term economic value of the Coliseum" and its surrounding property can be best realized by other parties. She said Onexim, "has engaged with Nassau County, other important stakeholders, and potential investors to find the right party or parties to take over operations of the Coliseum."

Andrew Gross and Jim Baumbach discuss the shuttering of Nassau Coliseum, the latest with the Islanders' Belmont arena and where the team will play games next season.

"We cannot predict or control the actions of other interested stakeholders," Pinchuk said. "However, we remain confident that the Coliseum and the proposed development project represent valuable investment opportunities, committed to the effort to find the right solution to the problems confronting the Coliseum, and hopeful that these efforts will bear fruit."

Nassau County Executive Laura Curran, a Democrat who has made development of the Coliseum site a priority since she took office in 2018, said she was "very disappointed" to hear of Prokhorov's decision but was not surprised given the challenges to arenas across the country.

She said she was "encouraged that Onexim is speaking to their lenders and other potential investors and we remain focused on development plans with RXR Realty, a strong and committed partner on this project."

"Transforming the Hub site, important before the pandemic, is now even more critical to Nassau’s economic comeback," Curran said. "We have momentum, and the collaboration of community stakeholders, elected leaders, business and labor, to ensure our success."

Nassau is projecting a budget deficit of $384 million this year, and Curran said she was "doubling down" on her commitment to developing the Coliseum site. Administration officials did not immediately answer questions about how they plan to deal with the loss of revenue.

Prokhorov holds a 49-year lease to operate the Coliseum in which the county receives at least $4.4 million in annual rent.

Nassau County spokeswoman Christine Geed said rent and utilities were paid through January, and the only rent the county has received since then has been in the form of partial payments through the entertainment tax on tickets. Geed said Onexim has asked for rent forbearance.

"The county is currently working on an agreement to support that request," she said.

Bloomberg first reported Tuesday that Onexim had told investors it would surrender its lease in exchange for the new owner assuming approximately $100 million in loans on the $180-million renovation of the Uniondale arena that was completed in 2017.

"Realistically, this day was inevitable when the state decided to build a new arena at Belmont; the pandemic simply made the end arrive sooner than expected," said Nicolello (R-New Hyde Park). "Long Island would never have been able to support two arenas within 15 miles of each other. The Majority looks forward to receiving the county executive’s detailed plan for the Coliseum, including how she will make up for the lost revenue."

The lease originally was negotiated in 2013 by then Republican Nassau Executive Edward Mangano and Brooklyn developer Bruce Ratner to provide programming and operations synergy between the Coliseum and Ratner's other arena, Barclays.

Soon after, Ratner left both arenas.

In 2015, Ratner sold an 85 percent stake in the company that operates the Coliseum to Prokhorov. In 2018, Prokhorov bought out Ratner’s minority share to become the Coliseum lease’s sole owner.

Last year e-commerce billionaire Joseph Tsai agreed to purchase the Brooklyn Nets and Barclays Center from Prokhorov. The deal did not include Onexim's Coliseum lease or its ownership stake in the proposed $1.5 billion commercial and residential redevelopment plans at the Nassau Hub.

Scott Rechler, CEO of RXR Realty and the county’s master developer of the Nassau Hub site, said Tuesday he did not believe the venue would close indefinitely, but instead would remain a focal point of future development on the site.

Rechler said Onexim has been transparent about its plans.

“Anyone who is going to step into their shoes realizes the way to optimize the value on the note is through having a vibrant development on the Coliseum site that makes it into a destination," Rechler said. “There’s an alignment of vision for what the master plan needs to be."

Rechler said there have been “good discussions” with investors and others. He said he continues to spend time and money refining a vision for the site for “a post-pandemic world.”

Legislative Minority Leader Kevan Abrahams (D-Freeport), whose district includes the Coliseum, said he doubted Onexim has the authority to close its doors and end its mandatory rent payments to the county.

“I don’t think they have that flexibility in the agreement,” said Abrahams, who has sought a briefing from the county and wants to know if Onexim is current on its rent payments. “They may be using it as a negotiating ploy but to me there is no negotiation because they don’t have that authority.”

Kevin Law, president of the Long Island Association, the region’s largest business group, said he was optimistic that the Hub property, Nassau’s largest tract of available land, will not be vacant permanently.

Nassau County owns the land while RXR, one of the region’s largest real estate groups, will continue to direct the redevelopment plans, Law said.

“Now they just need a new operator for the Coliseum and I’m sure they’ll find one,” Law said. “It’s certainly a monkey wrench thrown into the long saga of the redevelopment efforts. But I am still optimistic … there will still be opportunities there once we come out of the COVID pandemic.”

Law continued: "There are more questions than answers now. But the fact that the owner and developer remains the same, I’ll remain optimistic that something still can happen at the site. That would be good for the region. And whether that includes the arena or not will remain to be seen.”

Questions also remain about the Islanders' home in the near term.

The team returned on a part-time basis to the Coliseum in 2018. Only three months ago Gov. Andrew M. Cuomo announced the team would play all their games there next season in the final ramp-up before their Belmont arena opens.

If the Coliseum remains closed next season, the Islanders are expected to return to Brooklyn. Their 2018 lease with BSE Global — which previously operated both the Coliseum and Barclays Center — stipulates that games are to be played at either arena.

Hockey league officials said they were hopeful the Coliseum will reopen by the time the next season begins.

Jack Sterne, a spokesman for Cuomo, said, "While we do not know how or when mass gatherings will be able to safely restart, we will work with all involved parties to ensure the Coliseum remains an important part of Long Island’s culture and economy — including through continued support for Nassau County’s HUB project."

1978: Despite the recommendations of a citizens advisory committee to run the coliseum as a public benefit corporation, Nassau County Executive Francis Purcell seeks bids for private operation of the arena.

1979: Nassau selects Hyatt Management Corp., which runs the Superdome, will take over operation of the Coliseum.

2004: Charles Wang, owner of the Islanders, proposes a privately funded, $3.8 billion development called the Lighthouse Project on the site of the Nassau Hub.

2010: The Hempstead Town board kills the project, saying it is too dense for the community.

2011: Nassau County voters reject proposal to borrow up to $400 million toward a taxpayer-funded new arena.

2013: Developer Bruce Ratner enters a 34-year lease with Nassau County to renovate the arena, with an option for another 15 years. If there is no extension, Ratner will pay Nassau a total of nearly $195 million over 34 years.

2015: Mikhail Prokhorov, owner of the Brooklyn Nets basketball team, buys a controlling stake in the company that is redeveloping the Nassau Coliseum and building an adjacent retail and entertainment complex. Ratner remains as lead developer on the Coliseum project, along with Barclays Center CEO Brett Yormark.

November 2016: Nassau Coliseum renamed "Nassau Veterans Memorial Coliseum Presented By New York Community Bank." The bank purchases the naming rights to both the Coliseum and its future retail and entertainment district for an undisclosed sum.

September 2018: RXR Realty headed by developer Scott Rechler and BSE Global, which operates NYCB Live's Nassau Coliseum and has a 49-year lease, agree to build and finance a $1.5 billion project with housing, retail and office space on 72 acres around the arena.

June 16: A Prokhorov spokeswoman announces the Coliseum will close indefinitely as Prokhorov seeks investors to take over the lease of the 13,000-seat arena.

Island Ice Ep. 35: The Coliseum shuts down, now what?Andrew Gross and Jim Baumbach discuss the shuttering of Nassau Coliseum, the latest with the Islanders' Belmont arena and where the team will play games next season. Once again, Isles will be looking for a homeThe team needs a place to play next season while it awaits the construction of a new arena at Belmont Park.