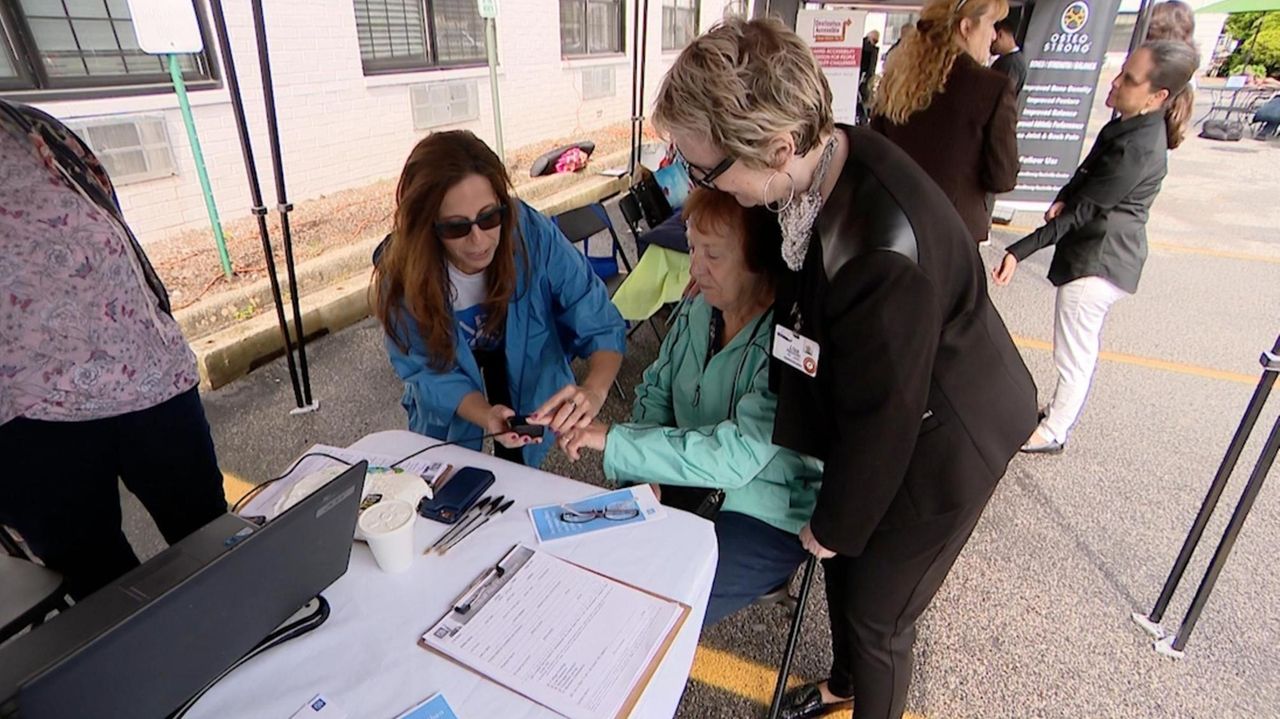 Nassau Police Commissioner Patrick Ryder and officers from the REACH team on Thursday took part in a seminar at the Lynbrook Restorative Therapy and Nursing center, where dozens of at-risk adults were able to register and be photographed as part of the proactive program to help keep them safe, facility administrator Lisa Penziner said. Credit: News 12 Long Island

Nassau County police are emphasizing the ways that residents can help law enforcement find and protect missing loved ones.

The aim of the police's Return Every Adult and Child Home program, launched in 2010, is to create a photo and fingerprint registry of at-risk adults with cognitive disorders.

On Thursday, Nassau Police Commissioner Patrick Ryder and officers from the REACH team took part in a seminar at the Lynbrook Restorative Therapy and Nursing center on Atlantic Avenue, where dozens of at-risk adults were able to register and be photographed as part of the proactive program to help keep them safe, facility administrator Lisa Penziner said.

"This isn't just for inpatients," Penziner said. "But for the whole neighborhood. My neighborhood has a lot of elderly who don't necessarily want to go into a facility, and the goal is that we have to keep them safe."

REACH is being pushed countywide, police said, and it enables authorities to disseminate photographs and other information related to missing persons quickly through the Silver Alert program. Police said as soon as authorities are notified that a vulnerable, at-risk person is missing, they can release information to other agencies and the media so authorities and the public alike can be on the lookout.

“In Nassau County, we put out the message that we’re there to protect the people of Nassau County,” said Nassau Police Commissioner Patrick Ryder. “But the two most vulnerable groups that we have is our young and our seniors. And we owe them. We are obligated to go out and make sure that they’re protected.”

Ryder said Nassau police have been part of the REACH program for several years and that there are close to 5,000 people registered so far. He added that some 1,700 people go missing in the county each year.

“If we can get them into the program, preregistered, then we’ll be able to find them quicker, faster,” he said. “The idea is that we protect our seniors, we protect our young, and we protect all the people in Nassau County.”

The Lynbrook seminar included representatives from AARP and police and veterans groups, and it also provided information on protecting at-risk adults from scams, Penziner said. Police have described scams totaling hundreds of thousands of dollars in recent months.

"It's absolutely a cognitive issue," she said. "They [at-risk persons] get confused. They may not remember where they live. You go out to the store, may forget where you live, where your house is. … What this program does is save so much time, because the minute someone's missing you have that picture in the system — and police know who they're looking for. Years ago, we didn't have any of this. Now, we're moving very far ahead toward keeping people safe."

But the program is not only for seniors with cognitive issues such as Alzheimer's disease, Penziner said. It's also about adults of all ages who might be vulnerable due to disorders including Down syndrome and autism, she said.

New tactic to protect developmentally disabledAdvocates say the cards are a great starting point but contend that many in law enforcement need extra training to properly react to the behavior of someone acting unpredictably.