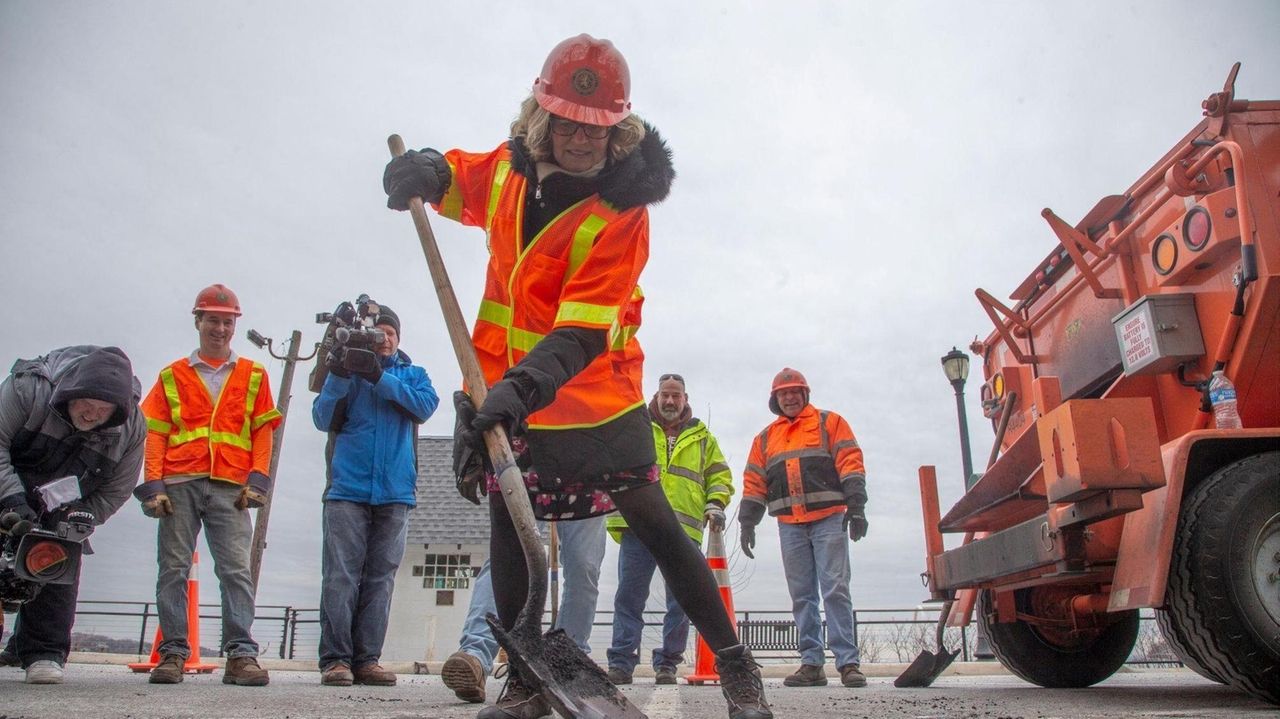 Nassau County drivers can expect "a lot more" potholes repaired this year and double the amount of road lane miles repaved, as officials try to make up for years of neglecting the roadways, County Executive Laura Curran said Wednesday.

Speaking at an outdoor news conference in Sea Cliff, where Curran joined crews in fixing a handful of potholes, the county executive said she was repairing a municipal culture that did not properly maintain roadways.

“Our roads are in disrepair,” Curran said. “It’s been a culture of neglect. We’re bringing the pride back.”

Curran, who took office last January, laid blame for the road problems squarely at the feet of the prior county administration.

“This is a very basic function of government — to have safe roads,” she said.

Curran said the county began ramping up pothole repairs last year, fixing 60,057 of the craters that serve as the bane of every driver's travels. Without offering an estimate, she said she expects county crews will repair "a lot more" this year.

The county recently purchased six "hot boxes," mobile equipment that heats up the asphalt and makes it easier to apply. Each one cost $27,500, officials said.

Even though peak pothole season doesn't start until the spring, county crews are already seeing many more potholes due to the severity and extreme shifts in the weather, she said.

The repaving of county roads will commence in the spring, since the work requires moderate temperatures, but the pothole repairs will be ongoing through the winter when the weather permits, she said.

The county also plans to more than double the number of road miles it resurfaces this year to 175 lane miles, from 87 last year, she said. Nassau has a total of over 1,500 lane miles in the county.

County Department of Public Works crews have also modified the way they fill potholes, cutting out larger areas of roadway around the damaged area before filling it, said Brian Schneider, deputy county executive for Parks and Public Works. That makes for a more lasting repair, he said.

Standing by the side of Shore Road Wednesday, Curran donned a hard hat and shoveled a pile of black asphalt into a pothole. She then climbed aboard a piece of road equipment called a roller, and, accompanied by a road crew worker, drove it over the repaired hole to flatten the asphalt.

Over the years, many county roads, sidewalks and curbs in this area "have been neglected and have become quite dilapidated," said Sea Cliff Village Administrator Bruce Kennedy, also at the news conference. He praised the new emphasis on repairs. "Just on this roadway alone in the past year, 40 potholes have been fixed."

Nassau County is undergoing a study to assess the conditions of county roads. The study is being conducted through the New York Metropolitan Transportation Council, a regional transportation planning organization that identifies, plans and seeks federal funding for such projects.

"While conducting this study, we recognized that there was an immediate concern of roadway conditions," Schneider said.

Potholes can be reported to the Nassau County Department of Public Works at 516-571-6900 or through the Nassau Now mobile app.

Study: Potholes cost LI drivers $719 a yearHere's how they affect your car and your psyche, and what officials are doing to smooth the roads.