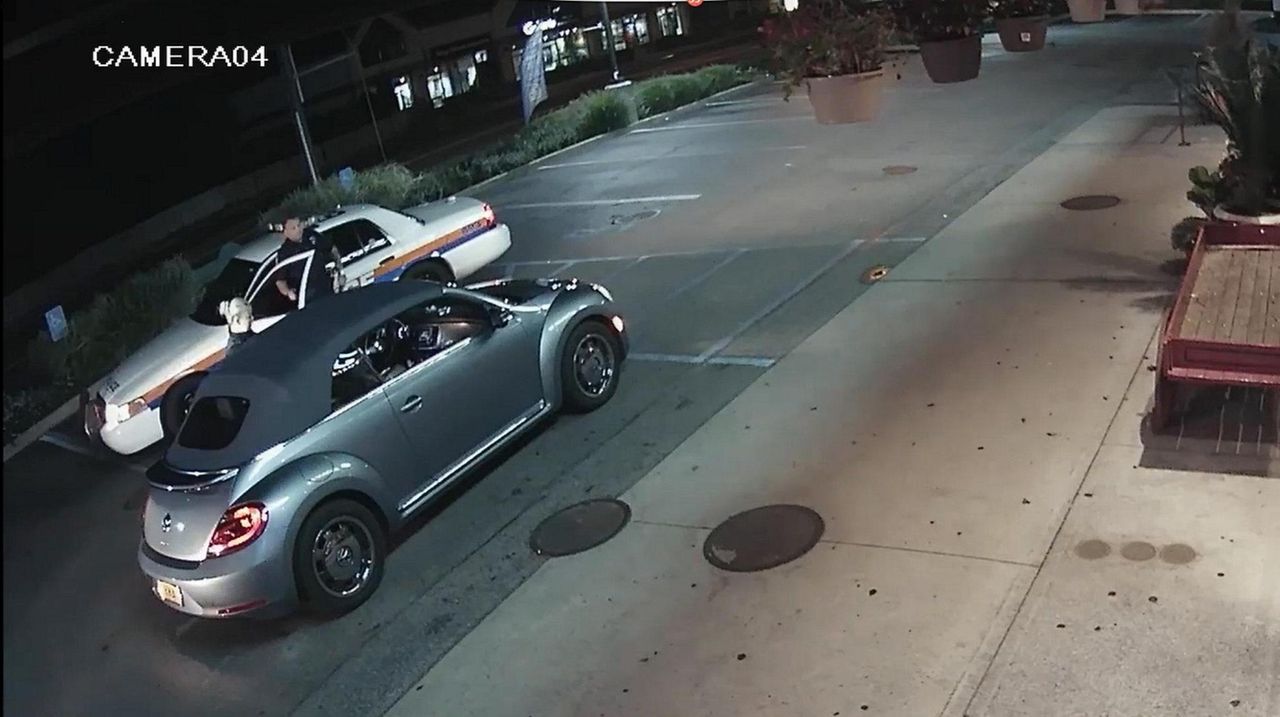 Nassau judges agreed to reduce or dismiss charges in more than 60 criminal cases — many involving drunken driving allegations — after District Attorney Madeline Singas' office disclosed to other defendants that police testimony in a 2017 drunken-driving case was "inconsistent" with video of the arrest. This video of that Greenvale arrest surfaced after the attorney for the defendant shared it with prosecutors in 2018. Credit: Susan Scaring Carman

Nassau County judges agreed to reduce or dismiss charges in more than 60 cases — many involving drunken driving allegations — after District Attorney Madeline Singas' office disclosed that police testimony in a 2017 DWI case was "inconsistent" with video of the arrest.

The video of that Greenvale arrest surfaced after the defendant's attorney shared it with prosecutors in 2018.

Prosecutors are required by law to share information about such differences with other defendants those same officers arrested. The differences included testimony about:

Faced with losing his license, DWI defendant makes a deal

More than 50 separate cases involving one of the cops, now-retired veteran Officer Michael Palazzo, were pending when the "inconsistent testimony" was revealed in early 2018, Singas' office said.

The Criminal Courts Bar Association of Nassau County sent an email to members on May 3, 2018, that warned defense attorneys to "use their own judgment and experience" in evaluating cases involving Palazzo and deciding whether "to go forward with a plea."

In an interview, Palazzo defended his actions in the Greenvale arrest and said the driver's case shouldn't have been dismissed. Court records show the driver's blood alcohol content at the scene registered a partial reading of 0.09 percent, just over the 0.08 percent threshold for legal intoxication.

"If I didn't lock that woman up that night, and she drove out of there and she hit somebody and killed somebody, we'd be having a different conversation," he said. "So the bottom line is, you can take little things and say, 'I didn't say this. I didn't say that.' I didn't lie."

Singas' spokesman Brendan Brosh said prosecutors "went above and beyond our ethical obligations," making disclosures to other defendants about Palazzo "at the pre-plea stage, well before any expected testimony by this officer."

He said prosecutors also have made disclosures about Allimonos’ testimony in the Greenvale case to approximately 20 other defendants “in advance of pleas or trial."

On Aug. 27, one of the last Palazzo-related cases ended when a Roslyn Heights restaurant manager who was facing felony DWI charges and a potential lifetime driving ban pleaded guilty to reckless endangerment in a misdemeanor deal that restored his license.

That case is among at least 58 cases that ended with defendants getting plea bargains involving reduced charges, Brosh said.

That included at least 44 cases involving Palazzo, and at least another 14 cases related to Allimonos.

In addition, judges dismissed charges in at least five other cases because the defendants’ rights to a speedy trial were violated after Palazzo “retired and was initially not responding to notifications” to appear in court, Brosh said.

About a half-dozen cases remain open, he said.

The district attorney's office didn't provide the exact number of cases and all of their resolutions.

The arrest that led to the plea bargains and dismissals started as a routine traffic stop shortly before 1 a.m. on a Saturday in September 2017.

Records show Allimonos, then a rookie cop, pulled over the driver of a Volkswagen Beetle convertible in a parking lot off Glen Cove Road in Greenvale before Palazzo arrived to back her up.

In December 2017, Palazzo and Allimonos testified at a Nassau District Court hearing in that driver’s case.

About two months later, in February 2018, the Volkswagen driver’s attorney, Robert Brunetti, showed the district attorney’s office the video footage of his client’s arrest that the defense obtained.

Brunetti then filed a court motion that alleged police misconduct and perjury, pointing to ways the officers’ testimony conflicted with the video.

Allimonos' testimony largely mirrored Palazzo's, according to Brunetti's motion, which claimed both officers made "many factual assertions" while under oath that were "mistruths and lies."

The defense lawyer asked in the filing for a dismissal of the case against his client.

Brunetti said in an interview that before the judge decided on the misconduct motion, the district attorney’s office moved to dismiss the DWI case and the judge agreed to do so — ending the case.

With the matter resolved in the defendant's favor, the case was automatically sealed.

Records show Palazzo, 47, of Nesconset, retired from his 20-year police career in March 2018, the month after the video emerged.

Palazzo said his retirement didn't relate to conflicts between his testimony and the video but to workplace harassment after his involvement in the arrest of the Greenvale motorist — whose son was a police officer.

Palazzo sued the county and police department in June, alleging he was forced to retire “because of an extremely hostile and abusive work environment” after the Greenvale arrest.

The lawsuit says he had to forfeit significant accrued overtime and unused vacation while losing out on increased pension and other retirement benefits after a career in which he made 3,300 arrests.

Christine Geed, a spokeswoman for County Executive Laura Curran, said Nassau “does not comment on current or pending litigation.”

Singas’ spokesman said assistant district attorneys began alerting defense lawyers “sometime in April” 2018 that cases involving Palazzo were “on hold” because of issues with his testimony.

Court records show the district attorney’s office released a “disclosure statement” to defendants in every open Palazzo case on May 16, 2018, after first seeing the Greenvale video on Feb. 9, 2018.

Some local defense bar members have criticized the district attorney’s office for not taking swifter action.

“There was basically a two-month period of time that the DA had the video, but they didn’t notify us,” said N. Scott Banks, attorney-in-chief for the Legal Aid Society of Nassau County.

Some, including Banks, also have questioned why Palazzo didn’t face prosecution for perjury.

Brosh said the district attorney’s office didn’t prosecute Palazzo for perjury because “the facts and circumstances of the inconsistent testimony do not meet the elements of a perjury charge in New York."

The Legal Aid chief said his office handled about 12 cases involving Palazzo disclosures, including two felony cases in which a grand jury didn't vote for indictments.

In the agency’s 10 or so other cases, one person pleaded guilty to a noncriminal charge of driving while impaired, other DWI defendants pleaded guilty to traffic violations such as speeding, and more cases were dismissed due to speedy trial right violations, according to Banks.

Defense attorney Gregory Grizopoulos, a board member of the Criminal Courts Bar Association of Nassau County, said he had a client in a Palazzo-related case who pleaded guilty to speeding after a blood alcohol content result of 0.14 percent — nearly double the threshold for legal intoxication.

Singas’ spokesman wouldn’t say if prosecutors made efforts to probe cases that already were closed at the time of the video’s emergence.

Court records and transcripts showed the disclosures said “the areas of inconsistency” included Palazzo’s testimony about a search of the Greenvale driver’s vehicle and purse, the presence of a civilian at the scene, the arrest time, the administration of a preliminary breath test, the observations of the driver exiting the car and the lighting during field sobriety tests.

Comparisons of Palazzo's testimony in the court hearing and the arrest video show conflicts that include:

The former officer said he retired after colleagues delayed providing backup for 20 minutes or more on a regular basis after his role in the arrest of the Volkswagen driver, whose son had been a Nassau police officer before taking a job with another local department.

Palazzo said other officers already considered him “a rat” after he was a witness in 2018 for Allimonos in an Internal Affairs Unit proceeding related to an Equal Employment Opportunity Commission complaint she filed against the county in 2017 alleging sexual harassment on the part of other police personnel.

Geed, the county executive's spokeswoman, said in a statement: "We will neither confirm nor deny the existence of any such complaint."

Nassau County Police Department spokesman Det. Lt. Richard LeBrun said in a statement that "due to pending litigation" the department was unable to comment.

“The bottom line is that if that wasn’t a cop’s mom, we would never be here,” Palazzo said. “I wasn’t a cop that … went on the stand and lied … I stood up for what I believed in and I stood up for a female that nobody would stand up for. And I got persecuted for it.”

Palazzo’s attorney, Michael Talassazan, said his client “may have made a few minor mistakes in testifying” in the Greenvale case. He said the Greenvale dismissal was because of the "political connections" of the driver's son.

But Greenvale case aside, Palazzo said it bothers him that many drunken driving suspects got plea bargains or case dismissals because of a controversy centered on him.

“It eats at me … Because you know these people were drunk … and they got a deal off it,” the former officer said.