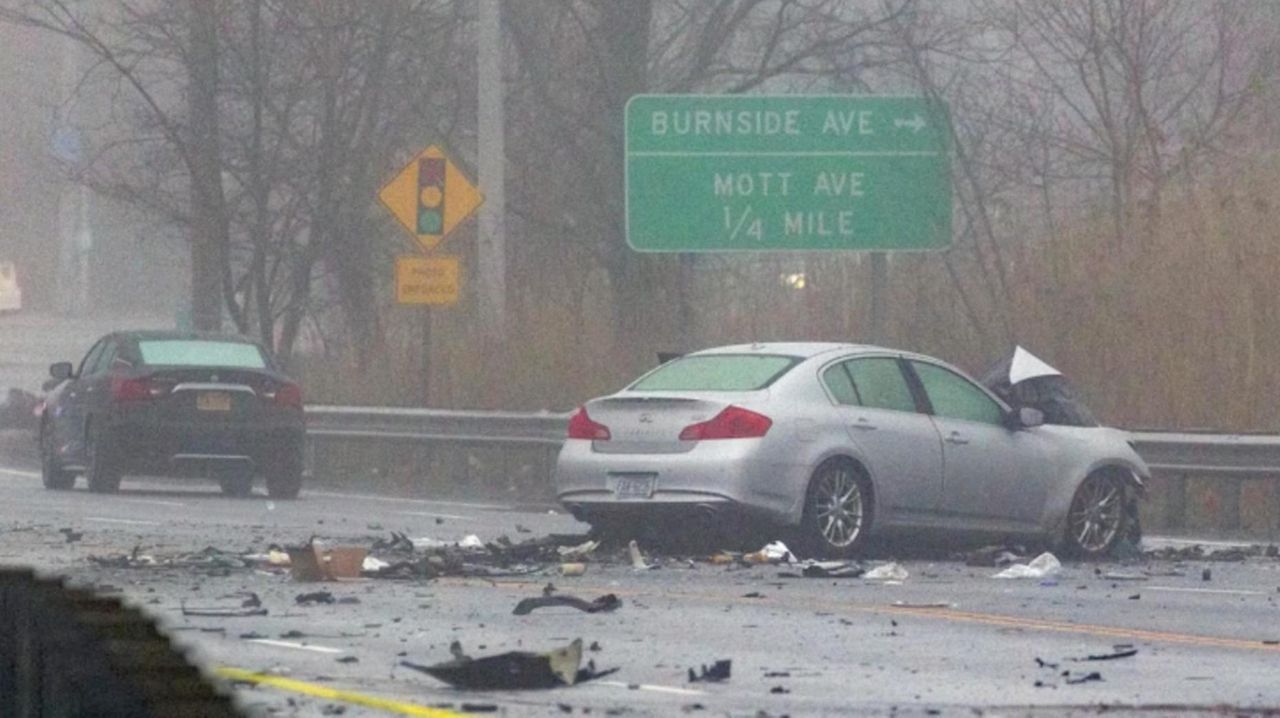 Two people were killed in a five-car crash early Wednesday on Nassau Expressway, police said. Two of the motorists were charged with drunken driving, Nassau County police said. The Nassau Expressway remained closed in both directions as investigators probed the scene in Inwood. The closure was from Burnside Avenue to Bay Boulevard. Credit: Howard Schnapp

The expressway finally reopened shortly before 7 p.m., after being closed for roughly five hours. The north-south road had been closed from Burnside Avenue to Bay Boulevard in both directions while police investigated the cause and cleared the scene, LeBrun said.

“It’s a slow, slow investigation because the debris field is so large,” he said.

What investigators had been able to determine, LeBrun said, was that at least one of the vehicles crossed into oncoming traffic and one car went over a guardrail.

Two of the motorists, both from Brooklyn, were charged with drunken driving, but weather and excessive speed also were being investigated as possible factors, he said. The drivers charged were headed in the same direction, he said.

The drivers were identified late Wednesday by police as Zakiyyah Steward, 25, of Park Avenue in Brooklyn and Rahmel Watkins, 35, of Quincy Street in Brooklyn.

Both will be arraigned Thursday in First District Court, Hempstead.

Watkins was charged with driving while intoxicated, police said.

The two who died were passengers trapped in a car that caught fire, LeBrun said.

The five injured were taken to hospitals, including the two drivers charged, LeBrun said. Two declined medical attention, he said.

Authorities will investigate whether excessive speed was a factor because that wide open stretch of road is known for racing, he said.

At the time of the crash, there was a light rain falling and visibility was about 2 1⁄2 miles at nearby Kennedy Airport, said Jay Engle, a meteorologist with the National Weather Service in Upton.

Firefighters, rescue and emergency personnel tried to get the passengers out but were unsuccessful, LeBrun said.

“They did what they could,” he said.

LeBrun said it was unclear if fire was the cause of death of the passengers. Dental records are being used to determine the victims’ identities, he said.