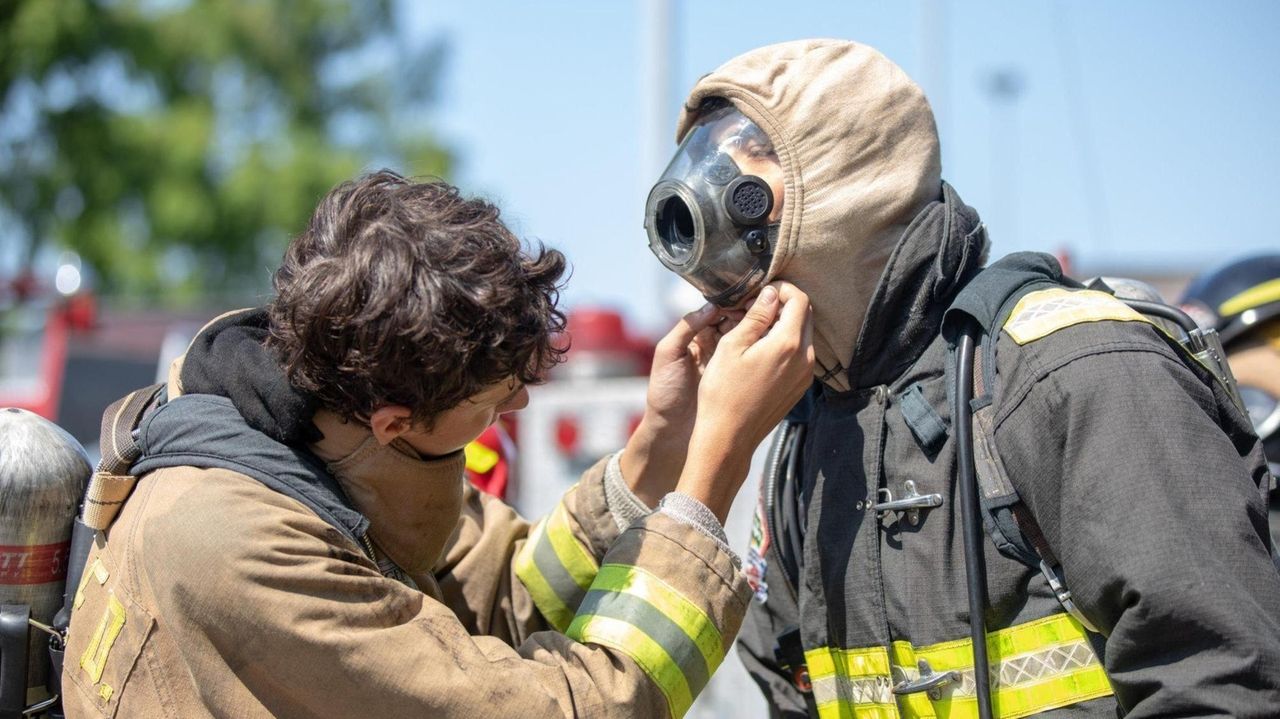 The Nassau County Junior Firefighters held its fifth Camp Fahrenheit 516 at the Nassau County Fire Service Academy in Old Bethpage on Thursday. The camp has 45 junior firefighters from Nassau and Suffolk counties and eight from Germany, as part of an exchange program. Credit: Newsday / Morgan Campbell

Instead of sitting at home and playing video games, 45 teenagers, mostly from Long Island, spent their Thursday morning playing with fire.

Or more specifically, trying to put them out.

Every year, the Nassau County Fire Service Academy in Old Bethpage hosts a five-day intensive training camp for high school students with the hopes of turning them into volunteer firefighters when they turn 18. This week was its fifth year.

In the camp, students go through courses such as forcible entry, second-story bailouts, and live car and warehouse fires. These aren’t soft drills made for children — temperatures can be more than 1,000 degrees.

“We have a two-week program that regular firefighter probationary guys, when they join the department, have to go through,” said Nassau County Junior Firefighters Association chairman Jerry Presta. “We took that two-week program and condensed it down into one week.”

Despite the intensity, the “juniors,” as they are called, don’t run away from the fire but toward it.

“Going into burning buildings is really interesting,” Syosset resident Rachel Seegull, 15, said. “It’s rewarding, because when the day is done, I can say I did something productive today.”

John Crimmins, 17, from Plandome, sees going through intense training as a way to eventually pay back to the community.

“Heat’s tough,” he said. “But it’s great that you’re able to help out other people and make a difference in someone else’s life, and hopefully save a life.”

Such programs are crucial in supplying young bodies, said Robert Hughes, the academy’s chief instructor. There are just under 10,000 volunteer firefighters in Nassau, but more and more of those joining tend to be in their 30s and 40s, he added.

“Even when we have older members join the fire department, they’re not as available as they once were,” Hughes said, because they have families and other responsibilities. “Whereas if you have an 18-, 19-year-old join, they’re more available.”

Around 85 to 89 percent of participants end up becoming volunteer firefighters, Presta said.

Nassau County Executive Laura Curran, who watched the participants Thursday morning, said the camp is "a great opportunity for these young people to get a sense of what it’s like to be a firefighter."

“We want to make sure we are recruiting and retaining young people going into the volunteer fire service," Curran said.

For the first time, eight junior firefighters from Germany participated, part of an exchange program. Finn Klapproth, 17,  said they learned a lot from the program, too.

There are no aboveground fire hydrants in Germany, for instance, and the fire equipment in America is much bigger, he said.

“It’s really important to know something about the world," he said, "to get to know more than our own little village and meet people.”

1:26
The school year began with rising hopes of a new normal. Then omicron hit.
Nassau assessments frozen for second year in a row
1:37
Dogs help sniff out potential trouble at JFK
On the front lines of omicron: It 'hit us like a tidal wave.'
Forecast: Below freezing temps for Saturday, Sunday
1:45
Hochul touts pandemic recovery plans in Woodbury speech
Didn’t find what you were looking for?