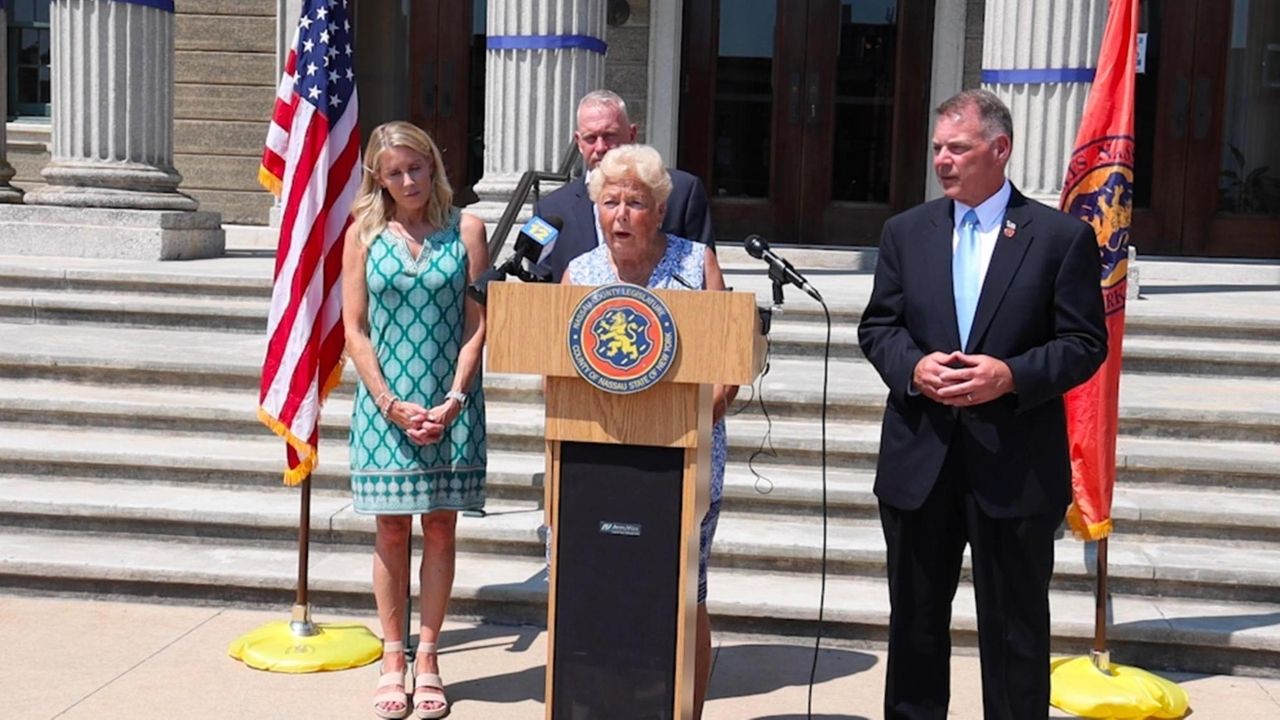 On Tuesday, a group of Nassau legislators proposed legislation that would create a special revenue fund to support the fight against opioid addiction by funneling any money that the county recoups from an ongoing class action lawsuit against pharmaceutical manufacturers and distributors. Credit: Howard Schnapp

A group of Nassau legislators proposed legislation Tuesday that would create a special revenue fund to support the fight against opioid addiction by funneling any money there that the county recoups from an ongoing class action lawsuit against pharmaceutical manufacturers and distributors.

The money would be used to fund "the financial resources necessary to combat this deadly threat and to provide interventions, education, health care, support and assistance to both addicts and their families," said the proposal from the legislature's Republican caucus.

Opening statements kicked off Tuesday in Central Islip in the wide-ranging lawsuit in which New York Attorney General Letitia James and Nassau and Suffolk counties accused multiple defendants of pushing opioid painkillers into New York communities while minimizing their dangers and the possibility of addiction.

One of the defendants, Johnson & Johnson, agreed to a settlement before the trial's start and will pay up to $230 million while also agreeing to stop manufacturing or selling opioids, James' office announced Saturday.

The opioid litigation is believed to be the first of its kind in the nation to go before a jury, Newsday previously reported.

Legis. Rose Marie Walker (R-Hicksville) said the newly proposed county legislation is intended to make sure any money from settlements or potentially from a verdict go back into the battling the opioid epidemic locally, especially after a spike in fatal overdoses during the coronavirus pandemic.

"This special revenue fund is going to be a giant step forward to enabling these organizations, these groups, these programs, to have the funds necessary to end this epidemic," Legis. Laura Schaefer (R-Westbury) said of education and treatment programs.

Legis. Steve Rhoads (R-Bellmore) said the proposal will ensure the money doesn't go into the county's general fund where it can be used for other purposes.

Family and Children's Association president Jeffrey Reynolds, whose Nassau organization provides substance abuse treatment, joined the three Republican legislators on the steps of the county legislature building as they announced the proposed measure.

"When you make a mess, you clean it up. And that's exactly what the drug manufacturers and distributors are being told today in court in Central Islip. It's very, very important that every dime from that settlement, every dime from that trial ... is plugged back into prevention, treatment and recovery," he said.

State lawmakers unanimously approved similar legislation on June 9 that would require any settlement funds to go back into treatment, prevention and education programs, and a spokesman for Gov. Andrew M. Cuomo said Cuomo was reviewing that bill, Newsday has reported.

The Nassau legislation is expected to go before a committee in two weeks before the entire legislative body takes on the matter later this summer, a spokesman for the Republican legislators said Tuesday.

The legislature's Minority Leader Kevan Abrahams (D-Freeport) said in a statement Tuesday that his party will "support any measure that will ensure the most efficient and impactful use of these life-saving resources." He added that settlement dollars paired with another local drug-fighting initiative "will place us at the threshold of an opportunity to profoundly amplify our delivery of treatment services and foster long-term recovery from the disease of addiction."

County Executive Laura Curran said in a statement Tuesday that Nassau "is paying a painful price to heal the damage caused by the opioid epidemic and no amount of money will replace the countless lives that have been affected."

She added: "We must ensure that any settlement money is used to support mental health and addiction programs in an effort to help residents and families who have been affected by substance abuse."