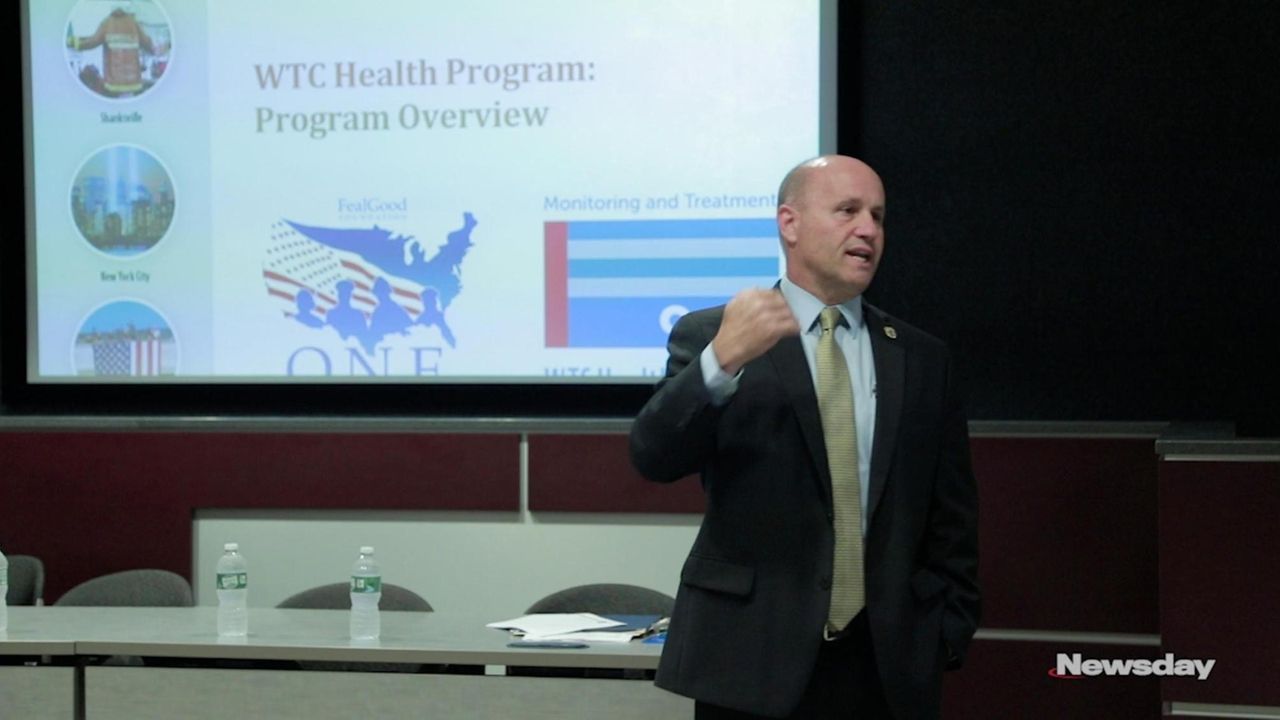 Nassau County Police Officer Kenneth Murray of Sayville spent weeks at Ground Zero after the Sept. 11, 2001, terrorist attacks, unwittingly inhaling the toxins that have taken the lives of colleagues.

But the 28-year veteran is like many first responders who haven’t registered for health care or compensation through the federally funded programs created to help victims — until now.

“I’ve been fortunate,” he said at an informational forum in Bethpage on Tuesday night. “I’ve lost a couple of friends, but I have been healthy so I never took the steps.”

Murray, 55, is one of about 150 Nassau County police officers who attended an event designed to let first responders know what they are entitled to through the World Trade Center Health Program and the 9/11 Victim Compensation Fund.

“When you look around and see other friends that you work with dying from crazy types of cancers and illnesses, you say to yourself, ‘There, but for the grace of God, go I,’ ” he said.

The forum was sponsored by the Nassau County Police Wellness Committee and featured presentations by James Ryder of the FealGood Foundation, the organization that is perhaps Long Island’s staunchest advocate for health care for 9/11 first responders.

Ryder, who is a brother of Nassau County Police Commissioner Patrick Ryder, estimated that while there were 100,000 first responders, as many as 10,000 of them have not registered for benefits that include medical care for a host of 9/11-related illnesses, some 70 types of cancer and 180 skin ailments.

“We need to get those 10,000 people registered,” said Ryder, who is blind in one eye and partially blind in the other due to 9/11-related illness.

“You get what you are due because of what you have given,” he said. “Listen, take the information.”

The forum also hosted Michael Barasch of Manhattan, whose firm represents clients who have filed as many as 15,000 claims through the Victim Compensation Fund.

Barasch said he was pleased at the news Tuesday that Senate Majority Leader Mitch McConnell, after meeting with John Feal of the FealGood Foundation, agreed to soon put to a vote legislation that would extend the fund for several more years, if not permanently.

“It’s been such a long fight for the past five years,” he said, hours after McConnell informed first responders the vote would take place in August.

The development follows testimony earlier this month before Congress by comedian Jon Stewart, who chided lawmakers for not fully funding the legislation to compensate victims.

LaShaun Carr, 46, of Westbury said he went to the event out of curiosity, having no health issues since he spent three days on the pile in lower Manhattan in 2001.

But, after the event, the 20-year veteran felt a sense of urgency, saying he is better informed now and will register for benefits “probably tomorrow.”

496 LIers whose lives were cut short by 9/11Nearly 500 Long Islanders were killed in the Sept. 11, 2001, terrorist attacks. These are the stories of those who were lost. Worry, confusion over 9/11 fund money shortageLong Islanders depending on money from the depleted 9/11 victims fund for medical bills incurred ... King: WTC Health Program will stay putA bipartisan effort by four members of New York's congressional delegation has helped scuttle a ...