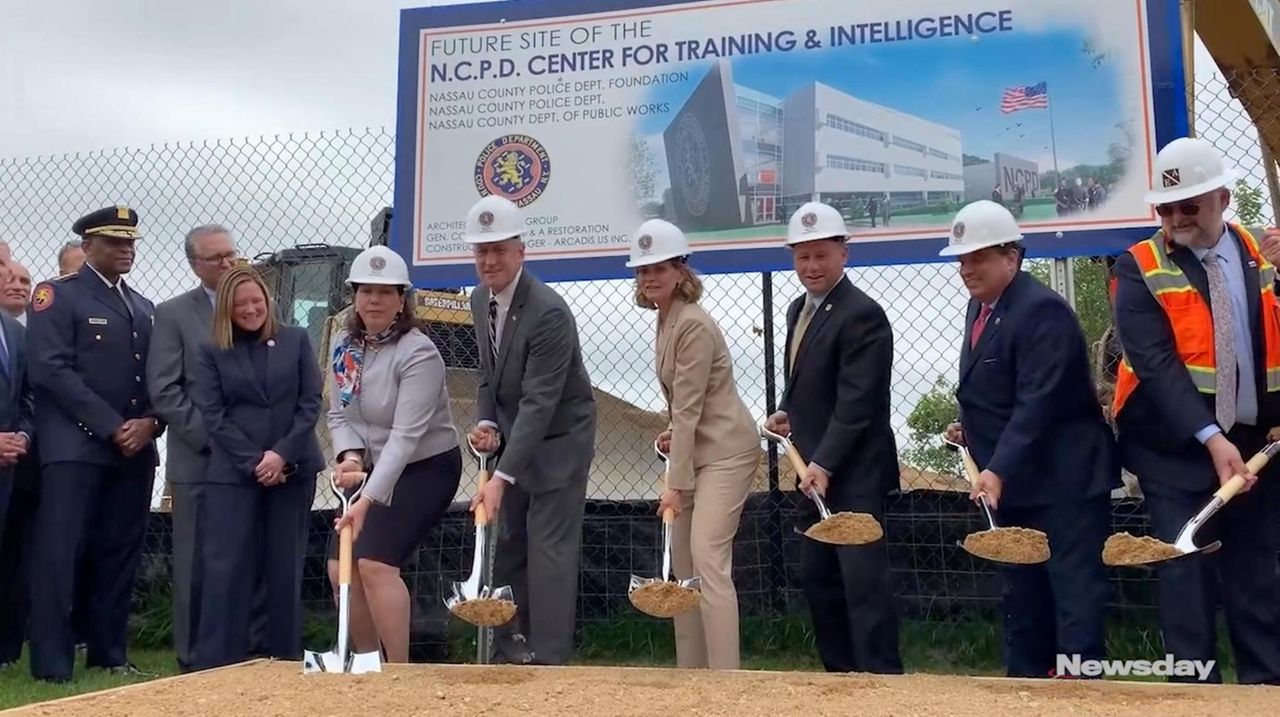 Officials break ground on a new center for police training and intelligence on the campus of Nassau Community College in East Garden City. The $54-million police academy is slated to open mid-2021. Credit: Howard Schnapp

The Nassau County Training and Intelligence Center, which will also house an intelligence and counterterrorism unit, will open in mid-2021, Curran said before the groundbreaking ceremony. Recruits for the Nassau County Sheriff’s Department and local police agencies will also be trained at the facility, officials said.

“The new facility, which is a real investment in public safety to ensure Nassau remains the safest county of its size in the country, will usher in a new era of police, corrections officer and probation officer training,” Curran said.

The Nassau County Police Department has not had its own training facility since 1982, forcing the department to train recruits at a variety of sites during the past 37 years, including trailers Curran said one officer described to her as a “broken-down mess.”  The county currently leases classroom space for its academy at the former Hawthorne Elementary School in Massapequa Park, paying $700,000 a year in rent.

“That is a waste of taxpayer dollars,” Curran said. “The new center for training and intelligence will stop that waste and be a modern and beautiful facility.”

Ryder said working the college will also help strengthen the department’s relationship with Nassau County’s young people by showing students “the police department is on their side.”

“We are going to train our cops, our detectives and our supervisors to be the best,” Ryder added.

Ryder said the ceremony was taking place on the 40th anniversary of the death of Nassau patrolman Michael Kavanagh , who was struck and killed by a vehicle driven by a person who was trying to evade police. Ryder said 40 officers were killed in the line of duty since Kavanagh’s death.

“This academy will be a tribute to them, to the sacrifices they made,” Ryder said.

“Students who are studying criminal justice at the college will not only learn from their professors but from actual NCPD instructors, and that will make this one of the premier programs in the country,” Curran said.

Former police commissioner Lawrence Mulvey, who founded the Nassau County Police Foundation in 2008 to raise money for construction of a police academy, said recruits are trained to both protect life and take life, and they require a state-of-the-art academy to help them master their jobs.

“Police chiefs, our elected officials must back up this awesome responsibility that we delegate to our police with the best training, with the best policies, with the best procedures that recognize these complexities and give our police officers clear guidance and direction and equips them to fulfill their duties,” Mulvey said. “This center will do that.”

Barge off Long Beach surveys best route for wind-powered cable
Forecast: Snow is falling on parts of LI
On the front lines of omicron: It 'hit us like a tidal wave.'
Forecast: Up to 3 inches of snow for parts of LI
Wounded toddler the latest victim as NYC shootings spike
Teen testifies Uber driver asked her out for drinks, canceled her planned route
Didn’t find what you were looking for?