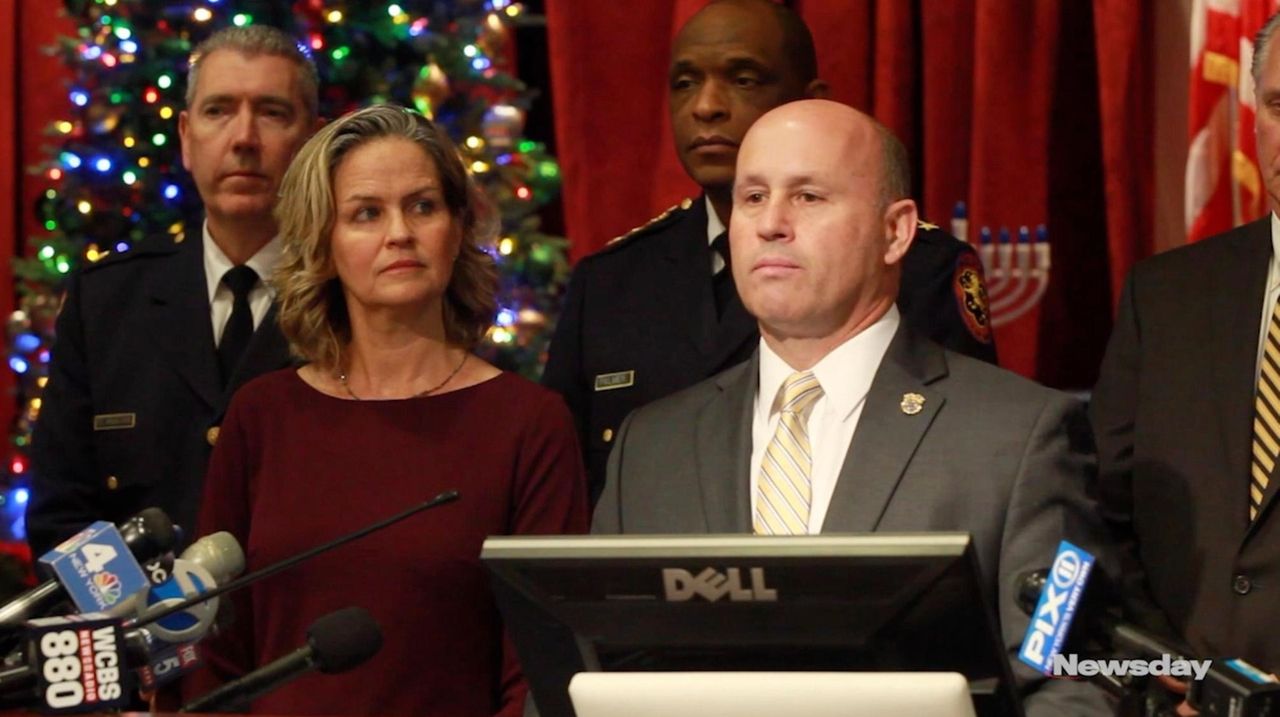 Nassau County officials on Wednesday announced that they are teaming up with the Ring app this holiday season to help crackdown on porch pirates. Credit: James Carbone

“The beauty of this is that it is going to make this police department more effective and more efficient,” Ryder said. “We are going to be able to go out there and get that video with the push of a button instead of canvassing neighborhoods."

The partnership, announced at a Wednesday news conference at police headquarters in Mineola, is coming at a time when Ring is getting increased scrutiny because of its privacy protections, and some question whether surveillance is valuable to police.

Eric Piza, a John Jay College criminal justice professor who has studied surveillance systems, said In some cases the amount of data created by government systems like body cameras can become so vast that it takes police resources away from the central investigation.

“Police won’t have the ability to leverage the evidence that it creates,” Piza said.

Despite that, Nassau police is among more than 600 departments nationwide to partner with Ring, according to The Associated Press.

The increasing civilian and police interface is a growing concern for some. A group of five U.S. senators wrote a November letter expressing their concern about the use of data and the addition of facial recognition software in Ring.

The senators, citing news accounts, noted security problems that left passwords vulnerable and gave hackers the opportunity to manipulate video feeds or eavesdrop on Ring customers. They also were concerned about the access its Ukraine development team has to live streams of video from Ring cameras.

“Americans who make the choice to install Ring products in and outside their homes do so under the assumption that they are — as your website proclaims — ‘making their neighborhoods safer.’" the senators wrote. “As such, the American people have a right to know who else is looking at the data they provide to Ring, and if that data is secure from hackers.”

Amazon did not respond to emailed questions by Wednesday night.

Curran did not address the wider concerns of Ring’s data use. Instead, she focused on the specific ability of the customer to share data with police officers.

“You always have to take privacy into consideration, and the fact that people don’t have to share if they are not comfortable sharing gives some consolation,” Curran said.

Police must request access to videos within a certain area and time frame, and customers must choose to share them with officers.

County officials stressed how they would protect the privacy of shared videos. Names and other identifying information would not be given to defendants or their attorneys, and videos that have no value as evidence would be destroyed, Ryder said. Officers do not have access to live feeds.

But they hope the tool will help stem porch thefts, which have increased to 233 this year from 207 last year, a more than 12% increase, Detective Lt. Rich LeBrun said. And private cameras act as a deterrent to “porch pirates,” Curran said. The videos have been crucial to solving these types of crimes, the police commissioner said.

“Most of these crimes get solved because of videos we receive through a canvass [of the neighborhood] and a doorbell ring,” Ryder said.

Although the images help, Piza is concerned that too much time will be spent sifting through videos to find evidence.

“If we’re talking about car burglaries, that happens fairly frequently,” Piza said. “If we’re getting a data dump, I’m concerned that might be too much information to find any value there. The majority of those cameras aren’t going to capture anything.”