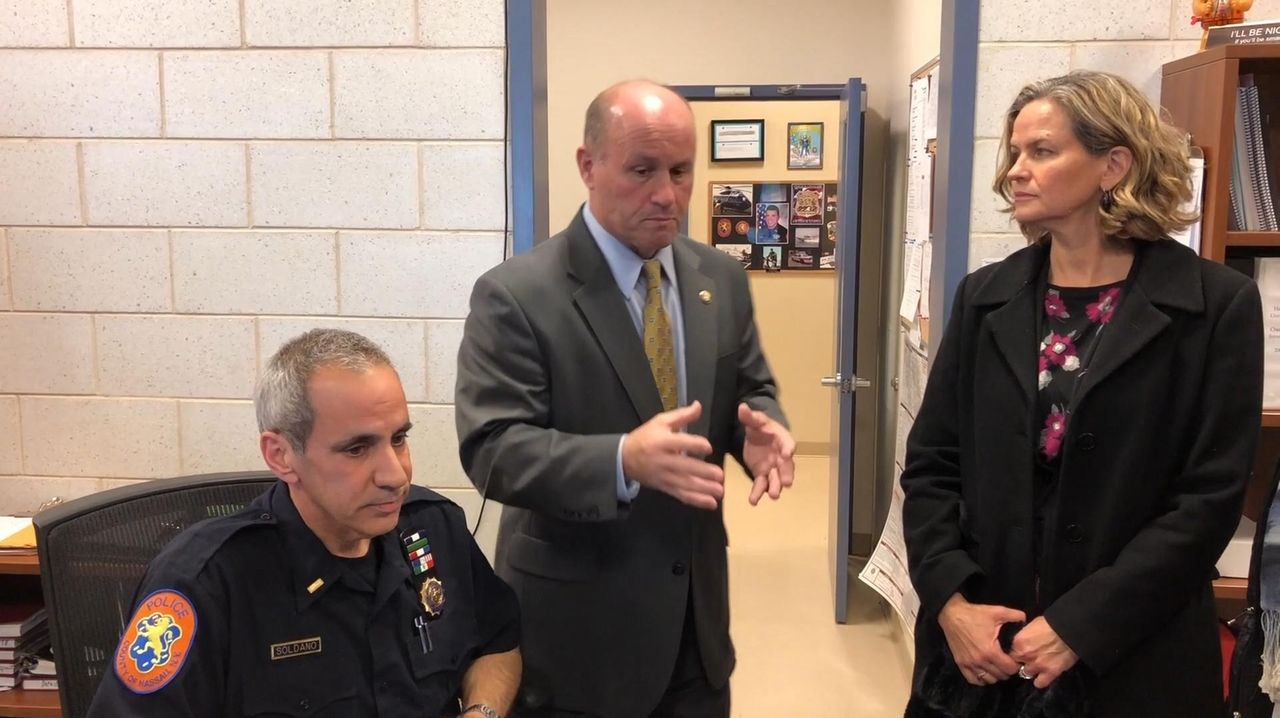 Patrick Ryder, nominated to become Nassau's police commissioner, talked about a new community council initiative during a meet-and-greet on Thursday, Jan. 25, 2018 at the First Precinct in Mineola. Credit: Howard Schnapp

Patrick Ryder, nominated to be police commissioner for Nassau County, plans to roll out a new computerized mapping system that tracks opioid overdoses in real time, similar to technology the department has used successfully to track and stem crimes, as part of a strategy to attack the deadly crisis roiling Long Island.

“This is without a doubt, a health crisis, a major health crisis,” said Ryder of the overdose epidemic that killed 195 Nassau residents in 2016 alone. “And we need to treat it like that. And it’s also — from my side of the world, the law and order side — it’s a crime.”

Utilizing an overdose tracking application called “ODMAP” — which Ryder said will track overdoses reported to hospitals, fire and police officials — will allow police to predict waves of overdoses and try to prevent them as well as the crimes that often accompany drug use.

“Our whole mapping program is built on the fact that you overlay issues, so you’ll have a layer of overdoses, you’ll put the layer of robberies, cars being broken into, over that, because they’re directly correlated,” Ryder said. “So if we go after the users and the dealers, we’ll turn around and fix our crime issues, too.”

In an interview following his being named by new County Executive Laura Curran as her permanent choice for police commissioner, Ryder said success in attacking law enforcement issues as varied as opioid overdoses and MS-13 violence can be achieved through a basic concept: enhancing communication between police and the communities they serve.

Ryder said he believes his new initiative to form a Commissioner’s Community Council, comprising 19 panels across the county, is the centerpiece of a plan to increase trust between residents and police and thereby help the department fight crime.

“I’m a numbers guy, so I’m always going to look at the numbers,” Ryder said. “But with the councils, it’s a reach . . . to the people in the community that want to help, that are afraid to come to us for many reasons, and then we start building more trust.”

Claudine Hall, president of Jamaica Square Improvement League in Elmont, said the new council formation will bridge divides in communities all over the county. “Kudos to Commissioner Ryder for doing this because this is just what the community needs . . . He has this sense of involvement, which I really admire about him. He never brushes you off, he really listens.”

Ryder is a 32-year veteran of the Nassau County Police Department, whose robust asset forfeiture operation helped equip the department with a network of technology such as license plate readers and the gunfire detection program ShotSpotter. But he’s not far removed from the everyday rigors of police work.

It was just one year ago that the then-detective sergeant was plucked from his eight-year-long perch as the commanding officer of Asset Forfeiture and Intelligence Unit and appointed deputy commissioner by former County Executive Edward Mangano.

When Thomas Krumpter retired as acting commissioner in July, Ryder was named to that post and continues in that capacity, pending his expected approval as permanent commissioner by the county legislature on Feb. 26.

Ryder inherited a department with decreasing crime statistics, and as acting commissioner helped maintain that trend, with major crime dropping more than 3 percent last year. Under his watch, the intelligence unit was credited with helping abet the drop in crime numbers — down by some 30 percent since 2010 — by employing predictive, analysis-based crime mapping.

But at the same time, the department faces critical challenges. Beyond the opioid epidemic, a spate of MS-13 killings has illustrated that serious crime problems can still bubble up at any time.

The department’s interaction with minority communities has also been questioned after Newsday reported last year that blacks, Hispanics and other minorities on Long Island were more likely than whites to be arrested on crimes resulting from what experts term a suburban equivalent of stop and frisk.

Douglas Mayers, president of the Freeport-Roosevelt NAACP, said he hadn’t been informed of the community councils, which he hoped would “make a difference.” He said there is a need for more dialogue.

“There is distrust,” Mayers said. “I see sometimes Nassau police will stop people on the street or anywhere and how I see them handling people within Roosevelt or those communities, they don’t do it like that in Hewlett Harbor, Merrick or those places.”

A lesson about instincts

Ryder, a decorated and active street cop, worked for the NYPD for two years in Brooklyn before joining the Nassau police in 1986.

He recalled a lesson he learned early on the job about following your instincts and doing the right thing. During his first tour, he was assigned as a “fixer” — meaning he was supposed to stay put — when he saw an assault occur down the block.

That captain, he said, was Ray Kelly, who would later be NYPD commissioner.

Curran’s nomination, if approved as expected, would make Ryder the first permanently appointed commissioner for Nassau in more than four years.

“Under his leadership, crime rates continue to plummet,” said Curran, a Democrat and former legislator from Baldwin. “He has a real handle on the finances and overtime has gone down as well.”

According to department statistics, police department overtime decreased $20 million from $72 million spent in 2016 to $52 million in 2017.

‘We’re on your side’

Violence attributed to MS-13 claimed the lives of eight people last year in the county, several of whom were found brutally stabbed and buried in area parks. Another six people were killed by MS-13 last year in Suffolk, where both President Donald Trump and Attorney General Jeff Sessions have visited and offered support from the federal government in the gang fight.

The gang, with strong ties to El Salvador and some other Central American countries, has injected fear into some in immigrant communities, especially those who may not have legal status and may be reluctant to interact with police.

Calls from Spanish speakers to a Nassau police line that provides interpreters for crime victims who aren’t proficient in English have dropped in recent months. Ryder said the numbers of calls have dropped “slightly,” and added that he hopes to reverse the trend.

“We can never let a victim be worried about calling the police,” Ryder said. “We need to tell that victim, ‘We got ya. We’re on your side.’ We’re not concerned about your status if you’re a victim of a crime. We’ll address the issue that you have and hopefully that will assist them in growing in their trust to come to us.”

Ryder said the department’s intense focus on MS-13 through its Gang Unit and its officers’ continued participation in a federal anti-gang task force has resulted in the arrests of hundreds of suspected gang members and led to a 47 percent drop in gang shootings this year.

Ryder said Marianela Casas — a one-time aide to Gov. Andrew M. Cuomo and Nassau’s commissioner for its Coordinated Agency for Spanish Americans whom he appointed assistant commissioner for community engagement overseeing the councils — ensures a direct line to him.

Already, Ryder said, dozens of residents have called his office volunteering to become part of one of the 19 councils, which will mirror geographically the county’s legislative districts and act as conduits between community concerns and the police department.

While the department has used a host of technology, such as cameras, GPS-trackers and gunfire detection devices to prevent crime and catch criminals, it does not deploy body cameras. Krumpter proposed a pilot program in 2015 that would equip 31 officers from the First, Third and Fifth precincts with cameras during a yearlong period in the communities of Baldwin, Elmont, Great Neck, New Cassel, Roosevelt, Uniondale and Westbury. But the department’s labor unions objected on the grounds that the use of the cameras needs to be negotiated and sued over the issue.

Asked about his interest in body cameras, Ryder said the “extreme cost” — estimated at $6 million to $8 million annually to maintain — is a strong consideration, but also pointed to the ability of the cameras to vindicate officers who are wrongly accused.

“Every single cop, or mostly every single cop, will tell you, they prefer to have a camera,” Ryder said. “Because wearing that camera protects them. Allegations come all day long, become litigation and sometimes expensive litigation.”

Ryder said the Fourth Precinct, for example has “cameras in every hallway in every cell area, every interview room. Many times we’re accused, ‘Oh, I wasn’t given my rights. or we’re accused of — ‘I was beaten by the officer.’ We’ll just pull the video and the video will kill that and stop the litigation and save us money.”

Ryder said that, given the competing factors, the issue of whether to move forward with body cameras needs to be decided by his boss.

“That’s a county exec decision,” he said. “Is this the right way to go, and the right money to spend at this time? Or should we go a different direction with those monies, putting it into the opiate crisis?”

County Legis. Siela Bynoe (D-Westbury), who toured the Third Precinct building in Williston Park on Thursday with Ryder and other officials, said she’s found him to be “very resourceful, innovative and very accessible.”

“I don’t want to downplay the difficulty of it,” Bynoe said. “But I’m hopeful that when people that have a lot in common get in a room and feel more comfortable talking about the challenges, we’ll be able to break down a lot of those barriers.”