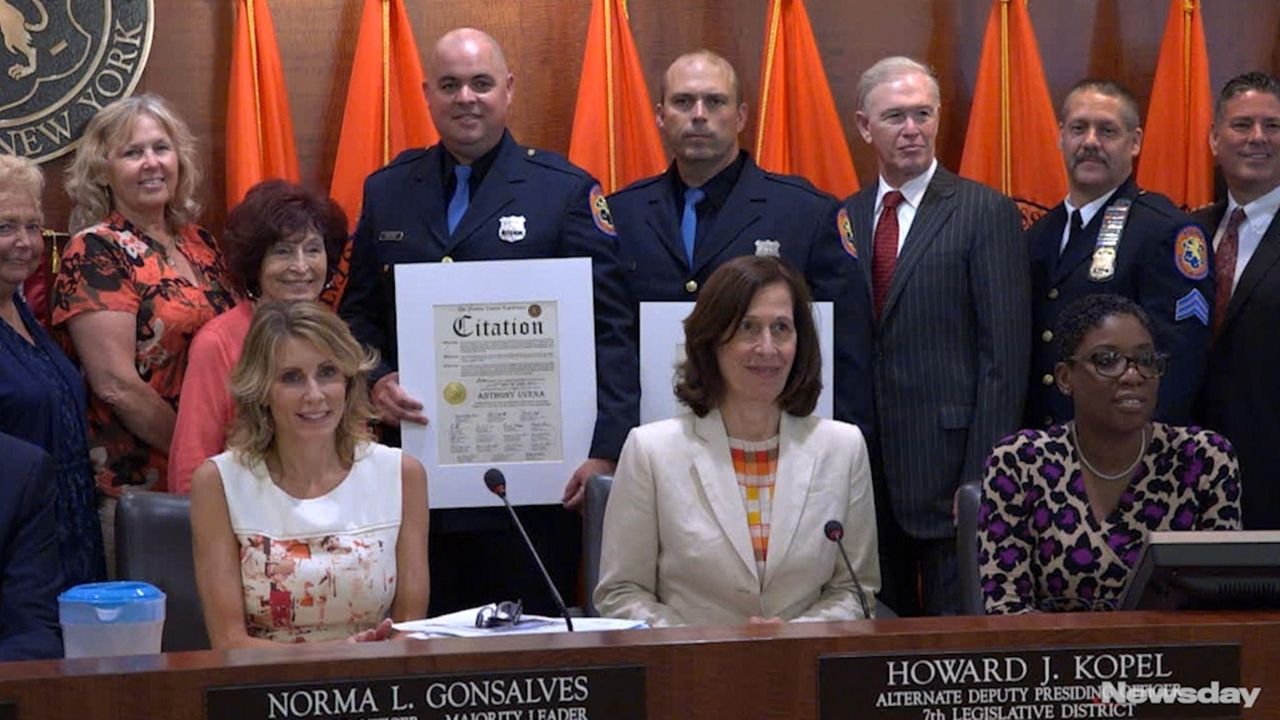 Two Nassau County cops were honored by the county Monday, June 19, 2017, for saving a suicidal man during what was meant to be a routine traffic stop in Island Park. On Jan. 2, officers Thomas Mulligan and Anthony Uvena were on duty, when they spotted a Ford pickup truck weaving in and out of traffic as it sped toward the Long Beach Bridge. They pulled the driver over and noticed that he was distraught, Nassau PBA president James McDermott said before the Nassau County Legislature Monday. Credit: Howard Schnapp

Nassau County police officers Thomas Mulligan and Anthony Uvena were on duty in Island Park when they saw a pickup truck speed past them, weaving in and out of traffic, heading toward the Long Beach Bridge.

It seemed like it would be a routine traffic stop, but when they pulled the driver over, he appeared “agitated and distressed,” Mulligan recalled, and “in need of a friend.”

The officers leaned into the side window of his Ford pickup truck and instead of reaching for their ticket pads, they asked the man what was wrong.

The driver, who was not identified by police, told Mulligan, 40, and Uvena, 42, about how his father had recently died of brain cancer, that he had lost his job and was in the middle of a heated custody battle over his 3-year-old daughter.

After about an hour of consoling the man and giving what advice they could, Mulligan and Uvena gave the driver a warning and sent him on his way.

Neither of the officers knew during that brief conversation on Jan. 2 that it would keep that man from suicide.

In March, the man contacted the station and credited Uvena and Mulligan with saving his life. He was contemplating suicide at the time, but said he has since found a job and has a good shot at winning custody of his daughter, according to Nassau Police Benevolent Association president James McDermott.

Uvena said he “didn’t think much of it at the time” and that it was “something any cop in the county would do.”

The officers were presented with a citation from the county for their act of kindness Monday at the Nassau County Legislature.

“This is a storybook ending,” Nassau County Presiding Officer Norma Gonsalves said. “It gives us another look at the police department and attests to the fact that they’re more than people on a beat or in a car but they’re people with a heart.”

Uvena said he’s glad that they were able to help steer the man away from his thoughts of suicide and set him on a new path.

“It seems like things are starting to work out for him,” Uvena said. “It feels great to be able to help.”