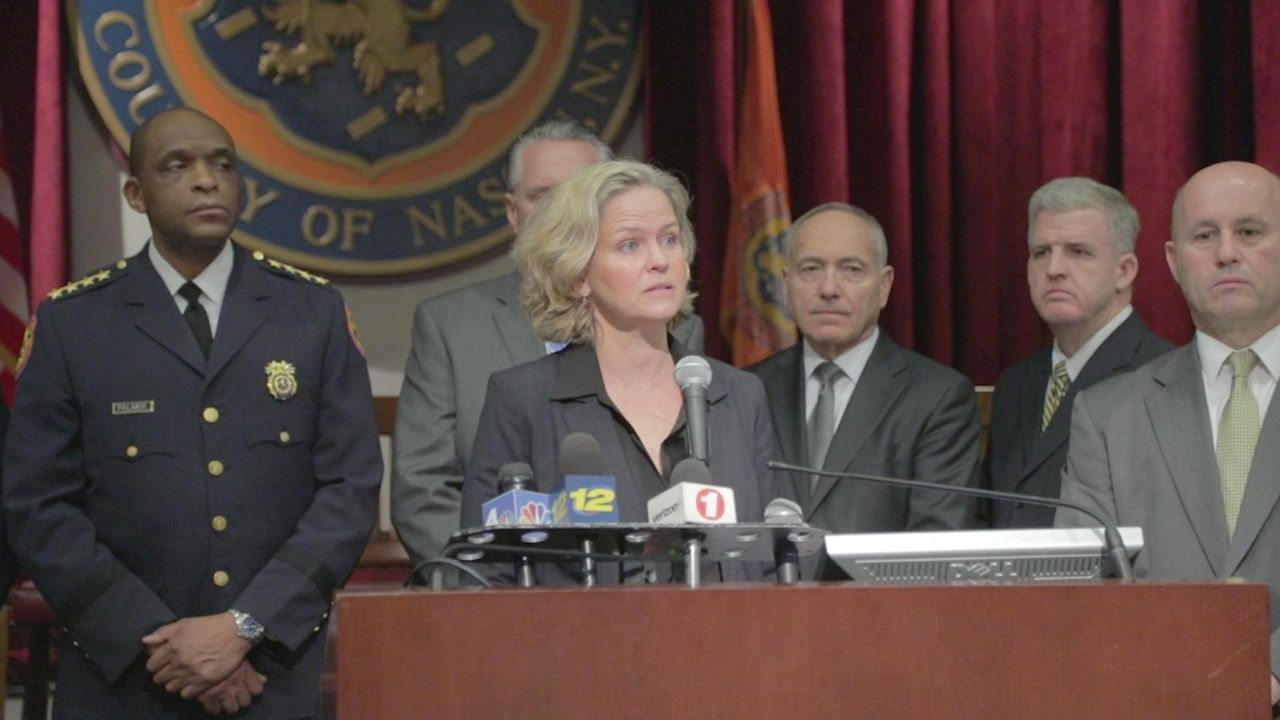 Nassau County officials on Thursday discussed the drop in major crime in the county and the Nassau police department's plans to ramp up educational efforts. Credit: Newsday / Yeong-Ung Yang

The Nassau County Police Department continued its trend of lowering crime in 2018 and planned to focus its educational efforts on younger residents through additional programs on drug and gang awareness for schoolchildren, officials said Thursday.

The county’s major crime, which includes murder, rape, burglary and robbery, dropped 28.6 percent over the past five years. Total major crime is down 4.13 percent, from 5,551 incidents between Jan. 1 and Dec. 20 in 2017 to 5,322 incidents in the same time frame last year.

Officials touted the most recent drop, noting that the county had enjoyed diminishing crime over the past decade.

“This is a very proud day for Nassau County,” County Executive Laura Curran said at a Mineola news conference Thursday. “In 365 days, so much has happened.”

Police Commissioner Patrick Ryder pointed to community engagement as a key part of the force’s crime-fighting strategy. He said the department had partnered with schools, local communities and the public to deter and solve crimes.

"Community policing is really in our DNA, it's in our blood," Curran said.

Ryder said the department would continue to work with the county’s schools using asset forfeiture money split between the Gang Resistance Education And Training (G.R.E.A.T.) program as well as bringing the Too Good for Drugs program to kindergarten classes. Third-graders will be taught about vaping.

Targeting younger students will, ideally, deter them from starting to vape or use other drugs when they get older, Ryder said.

"We need to protect the foundation of our society and that's our kids," he said.

Officials also noted success with Operation Natalie, which maps opioid overdoses and automobile larcenies — a crime often committed by drug users. Automobile larcenies are down 12 percent  from 2,375 in 2017 to 2,080 in 2018, Ryder said. The mapping is paired with town hall meetings countywide, as well as treatment and prevention plans.

"We have more work to do," Ryder added.

The department also will direct more funds toward decreasing drunken and other impaired driving, he said. Additional money will go to "Safety Town" in Eisenhower Park in East Meadow to teach more kids about pedestrian, bicycle and motorist safety.

The department also increased its social media presence in 2018, using its #MugShotMonday posts to arrest 203 people on warrants through tips.

Nassau County recorded 16 homicides this year, compared with 15 homicides in 2017. Two of the 16, however, are believed to have been committed by gangs in 2016 and 2017 but the victims' remains were discovered in 2018.

A third, the Dec. 18 fatal shooting of Harold B. Sermeno, 17, whose body was discovered behind the Five Towns Community Center in Lawrence, is believed to be connected to either MS-13 or the 18th Street gang, Ryder said previously.

An NYPD source has said Sermeno’s murder is believed to be linked to a gang-related slaying in Queens several days before.  Several arrests have been made in the Queens case.