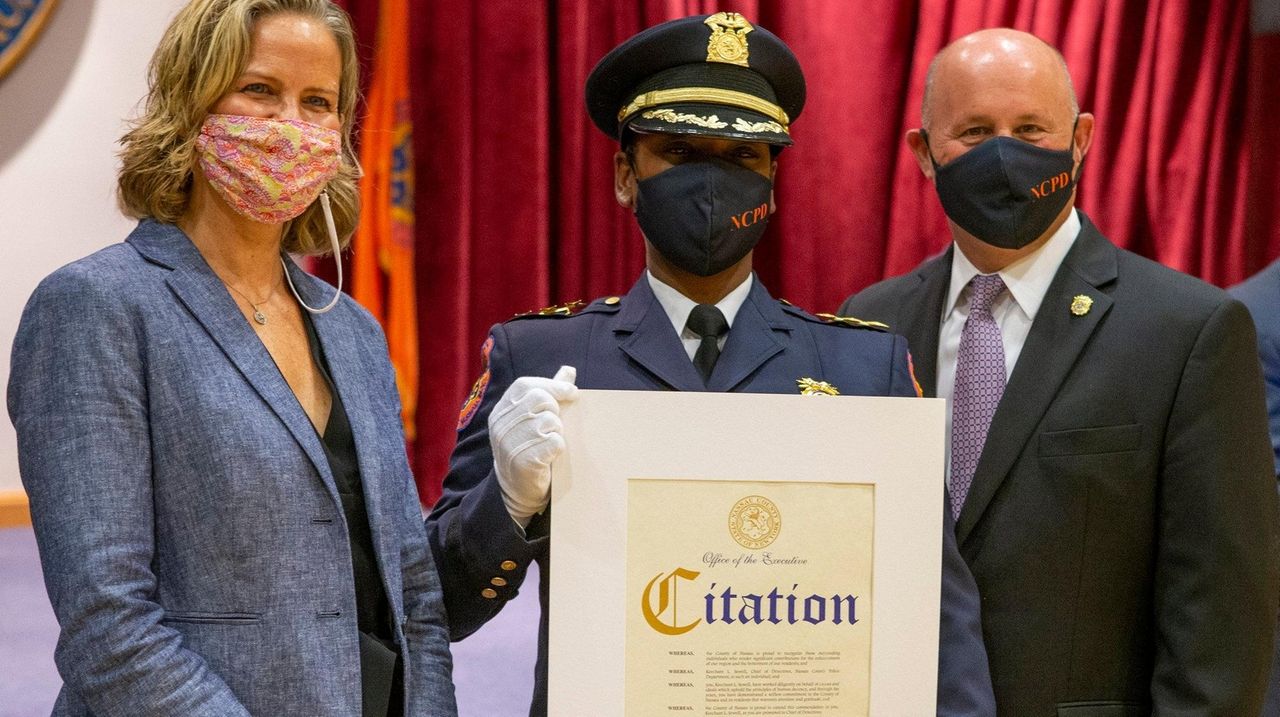 For the first-time in its 95-year history, the Nassau County Police Department has named a Black woman as its chief of detectives. Newsday's Cecilia Dowd has the story. Credit: Howard Schnapp

The Nassau County Police Department has named a Black woman as its chief of detectives for the first time in its 95-year history.

Keechant Sewell, a 22-year police department veteran, was promoted to a three-star chief overseeing the 351-member detective division, the department announced Thursday along with dozens of other promotions.

Sewell is not new to the role of trailblazer. She spent the last three years as chief of the Professional Standards Bureau, which includes Internal Affairs. She was also the first Black woman in that role.

"I hope to inspire service," Sewell said after Thursday's socially distant promotion ceremony at police headquarters in Mineola. "And what I've been able to accomplish, I hope it inspires women, young girls, men — anyone who wants to be an officer and be able to take advantage of the things that have been afforded to me. I would hope that they see representation. And representation matters."

Nassau Police Commissioner Patrick Ryder said he offered Sewell a choice: a promotion to a three-star chief with the option to continue overseeing Internal Affairs, or chief of detectives.

As chief of detectives, Sewell oversees the department's homicide squad, narcotics and crime scene investigators as well as detectives in the precincts and Special Victims Squad. She also supervises the detectives assigned to the district attorney's office.

While Sewell’s promotion comes at a turbulent time for community-police relations due to a series of police killings of unarmed Black people and ensuing protests, Ryder said he selected Sewell because of her ability — not because she’s a Black woman.

"The fact that she is a female and she’s black, does that help me?" Ryder said. "Absolutely it does with my community, absolutely. But that’s not why she’s there. She’s there because of who she is."

Nassau's 2,400-member department has 229 female officers; 21 are Black women. There are 78 Black men working as officers. Joan P. Yale was the department's first female chief of detectives; she retired in 2007.

Sewell, a Queens native who lives in Nassau, started her career in October 1997, beginning as a patrol officer in the Fifth Precinct. She was promoted to detective, sergeant and later became a precinct commander and headed the Major Case Bureau, among other roles. She's also the department's chief hostage negotiator.

Sewell received training at the FBI National Academy and has been an instructor at the county's police academy.

Her grandfather was an NYPD officer and her father served in the Marine Corps, which, she said, taught her "the value of service and dedication."

Sewell will be paid an annual salary of $244,692, said Det. Lt. Richard LeBrun, a department spokesman.

"I'm excited for her on so many levels — as a law enforcement officer, as a woman. It's really an incredible role," Singas said. "It also serves as a reminder to women working in law enforcement that their talents and their hard work don't go unnoticed."

"She has a resume in the detective division that is second to none," Wighaus said. "Chief Sewell was a detective and has a great appreciation for the cases detectives investigate in Nassau County every day."