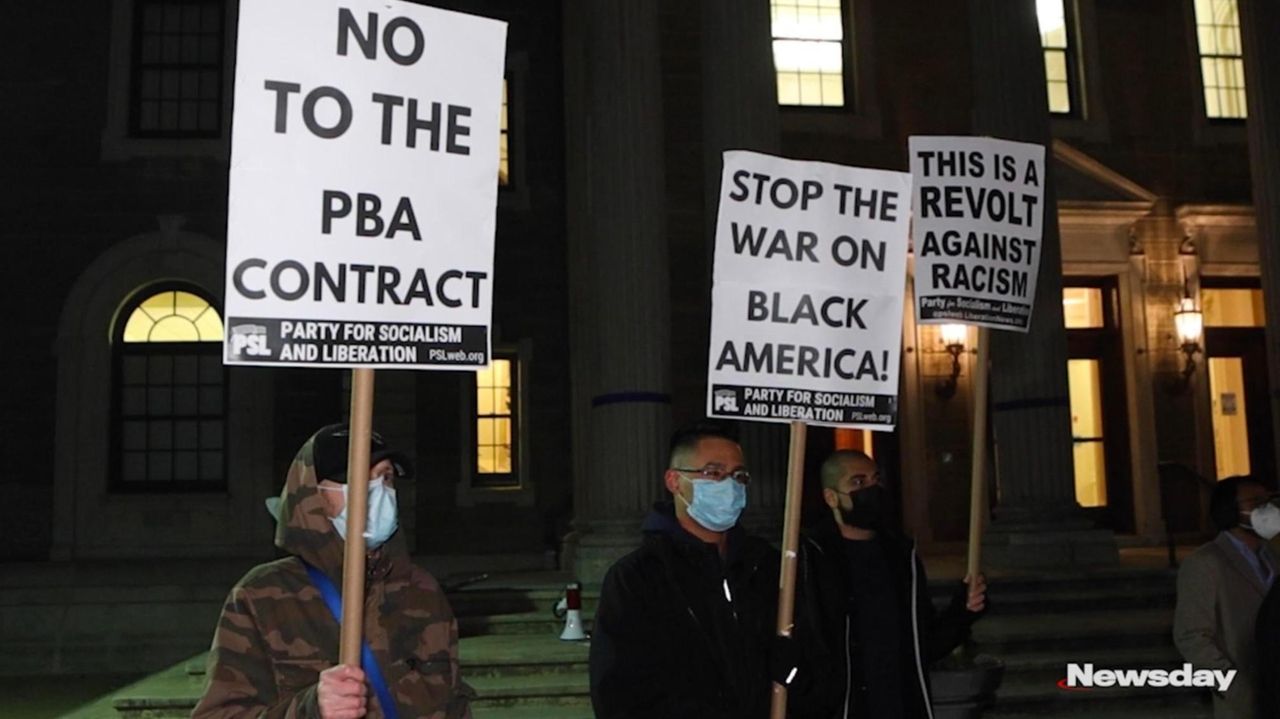 Protesters on Thursday night called for Nassau legislators to hold off on a vote on the recently agreed-upon PBA contract, which will have to be approved by the legislature. Activists want police reform. Newsday's Cecilia Dowd has the story.  Credit: Howard Schnapp; Facebook Nassau County Executive

Activists at a Mineola rally Thursday night demanded that Nassau legislators hold off on approving a new police labor contract until after the public weighs in and it's clear the deal complies with state-mandated law-enforcement reforms.

Outside the Nassau County executive building, a crowd of more than 100 gathered, with protesters chanting "no PBA contract" and "no justice, no peace — no contract for the police."

Protesters said the tentative deal between the county and its largest police union would fail because it sidesteps Gov. Andrew M. Cuomo’s executive order on police reform and bypasses legislative as well as public hearings.

"The public should have some insight. The community should have a say in this," said Barbara Powell, president of the Hempstead NAACP.

According to the terms of the labor deal between Nassau County Executive Laura Curran and the Police Benevolent Association, which represents rank-and-file cops, officers for the first time would wear body cameras. Nassau cops would each receive $3,000 annual cash payments to wear the cameras.

The union membership must vote on the pact, and then it must be approved by both the Nassau Legislature and the county's fiscal control board.

Cuomo signed the executive order in mid-June as protests over the killing of George Floyd by Minneapolis police took place across Long Island, New York City and the country. The order requires every police agency statewide to evaluate its policies on use of force, crowd management, bias training and citizens’ complaints, among other issues, or risk the loss of state funds.

At the time, the governor said each agency must come up with a plan to "reinvent and modernize police strategies" by April 1, when New York’s next fiscal year begins. A local legislative body also must approve the plan.

"Nassau County is a national leader in both public safety and police reform," Fricchione said, "having convened more than 50 public meetings so far this year on strengthening police accountability, transparency and maintaining the County’s status as the safest community in America."

Nassau presiding officer Richard Nicolello (R-New Hyde Park) said majority legislators will "thoroughly review the PBA contract" and make their decision "based on what is in the best interests of Nassau’s taxpayers and residents…."

Also in a statement, William Biamonte, chief of staff to Nassau's Minority Legislative Caucus, said Thursday night that the group was unified in its support of police reform.

"It is our duty to hear the public’s voice as we seek to produce a comprehensive, community-driven plan that meets the diverse needs of Nassau County residents while ensuring officers are optimally and appropriately equipped to uphold the highest standards of professionalism as they serve and protect the public."

"They give them free run and free reign when they should be giving reform a chance," said Brewington, a member of Long Island Advocates for Police Accountability.

Another member of the group, Angela Martin, of West Hempstead, said the Nassau police department needs to address reforms.

"We don’t want to use the word defund," she said. "We want to distribute the money to other places like for social workers to help the mentally ill."

Terryl Dozier, 35, a member of Long Island United to Transform Policing and Community Safety, told the crowd to flood Nassau politicians’ inboxes, and phone voice mails — including Curran’s — with messages about their opposition to the PBA contract.

He said concerned residents must convey to their elected representatives there can be "no police contract without structural reform" or else there will be consequences at the ballot box.

More than a foot of snow possible for eastern LI from weekend storm
Great Neck doles out $35G for study to relieve flooding in village
Blakeman names Bucaria, Chiang to top Nassau jobs
1:17
Long Beach library to unveil rotating exhibit of photographs celebrating city's past
Long Island educator for decades dies at 92
1:26
The school year began with hope. Then omicron hit. And (un)masking.
Didn’t find what you were looking for?