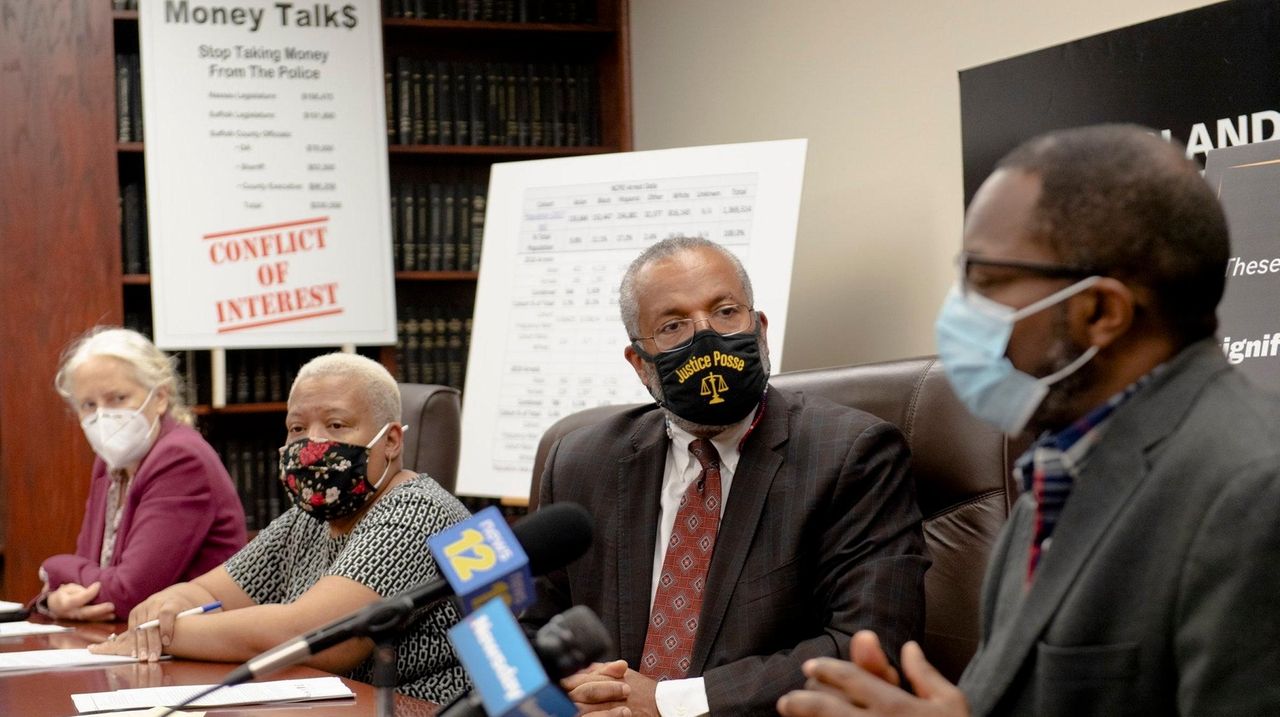 Nassau County's plan to reform its police procedures is a "complete sham" with minimal community input or public transparency, according to civil rights leaders and advocates asking for the state to intervene.

Members of Long Island Advocates for Police Accountability, formed in July to implement reforms in local law enforcement, said Nassau has failed to create a process that would end "structural racism" in policing.

"We are ringing the bell and saying 'People of Nassau: Look behind the curtain,' " said Hempstead civil rights attorney Frederick Brewington. "Because it is not what it appears to be."

The group was created in the wake of George Floyd's death in police custody in Minneapolis and came out of Gov. Andrew M. Cuomo's subsequent executive order directing local governments to review police deployments, policies and practices.

The order also called for a plan to promote community engagement and address any racial bias. Nassau's plan must be approved by the county legislature by April 2021 to be eligible for future state funding.

But LIAFPA leaders said county leaders have only "gone through the motions," providing the community with lip service while quietly conceiving a plan with little community input.

"Nassau County has failed," said Brewington, noting that Suffolk has taken the process more seriously. " … If we were to grade [Nassau] they would get a big fat F."

In a statement, Curran said Nassau has held 50 community sessions, both in-person and virtually, since June.

"We’ve brought law enforcement, protest organizers, and community stakeholders together to work toward solutions that improve public safety and reinforce trust between police and the community," Curran said. "Nassau is poised to make historic progress on the issue of body cameras, which is a proven tool for transparency, accountability, and safety."

In a statement, Ryder said the department has provided "data and other pertinent information" to several committees and community groups.

"Reform is about making change and change is how we move forward," Ryder said. "When the police reform community meetings are completed we will release those recommendations and changes."

Cuomo's executive order stipulates that if elected officials are "unable or unwilling" to manage the process, the state can select a convener — essentially a police reform czar — to take over.

In a pair of September letters to Cuomo seeking a convener, LIAFPA detailed a litany of problems with Nassau's reform process, including pre-vetting public questions, failing to include key stakeholders and refusing to gather and release data.

In a statement Jack Sterne, a Cuomo spokesman, said the reform process "is designed to help repair the relationship between police and community by forcing all parties to come together to find a way forward — and that is exactly what is happening across the state."

Sterne said public comment on the plan and approval by local lawmakers "ensures all community members can make their voices heard and have a seat at the table."

Former NYPD officer Dennis Jones, a group member, said Ryder has been drafting the county's plan with input from a county group comprised predominantly of law enforcement and elected officials known as the Police and Community Trust.

"We see this as a complete sham," Jones said. "A failure and there's no turning back on this. It has to be redone."

The group says Nassau police failed to release critical data that would inform the reform process, including information on excessive force among officers, false arrests of minorities and instances of police discipline.

"Without data you cannot understand what the problems are," said Amy Marion, a civil rights attorney and group member.

Newsday reported in October that Suffolk police officers pulled over Black drivers almost four times more often than white drivers, and Hispanic drivers twice as often, when matched against the size of the driving age population in the area patrolled. Nassau has pledged to release similar data.

The minimal data on existing police practices released to date by Nassau police is misleading, Brewington said, pointing to figures showing Blacks and whites represent nearly an identical percentage of the county's total arrests — about 35% each. But whites comprise almost 60% of Nassau's population while Blacks represent just over 11%.

Based on population data, Blacks are 5.3 times more likely to be arrested in Nassau than whites, Brewington said.

"Nassau County has not given change a chance," said Edwards said, adding that labor contracts, including an upcoming Police Benevolent Association deal, should be used as leverage to negotiate over police reform.