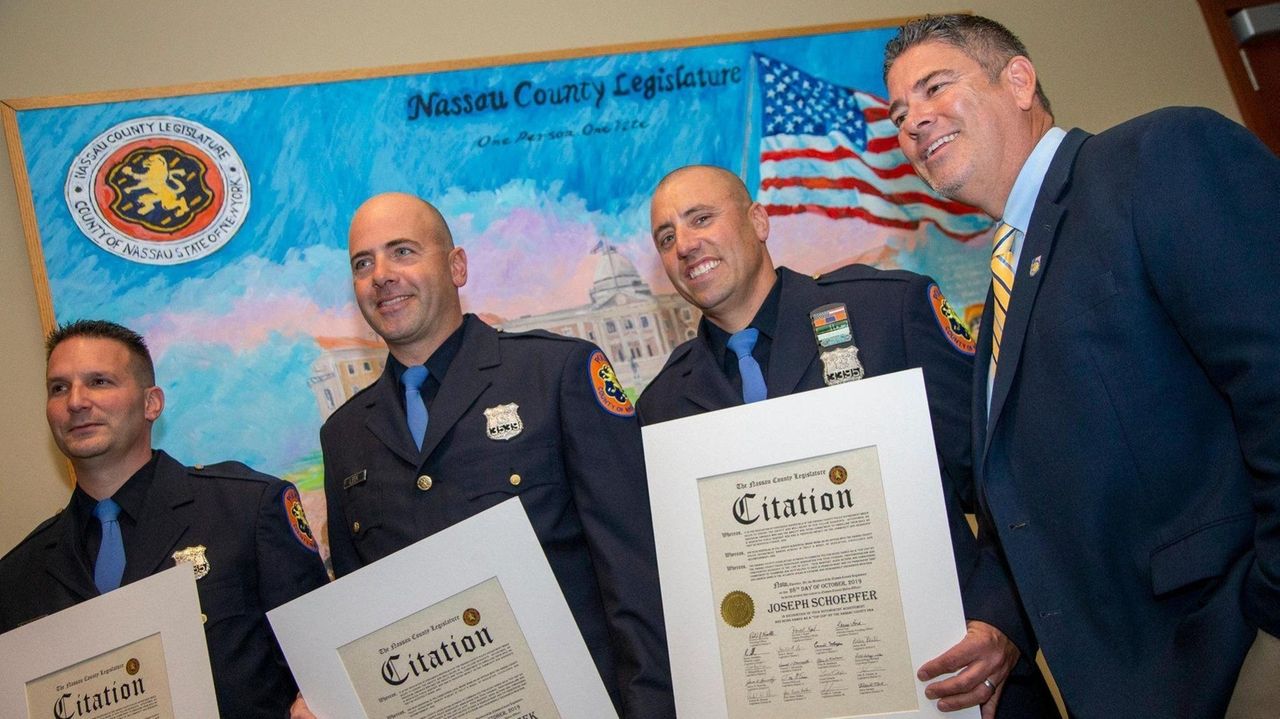 Three Nassau County police officers were honored Monday by the Nassau County Legislature for rescuing five people on a boat with a failed engine, in water with high swells, about a mile out in the Atlantic Ocean off Jones Beach Inlet on Oct. 2. Credit: Newsday / Chris Ware

It was a nasty day on the Atlantic Ocean, with swells rising up to six feet high and a storm off the coast.

Three Nassau County Marine police officers patrolling the area off Jones Inlet could hardly believe it when they got the call on the afternoon of Oct. 2: A small boat was out on the water, and it was in trouble.

A Baldwin man, his teenage son, and four of the son’s friends had gone out to fish. Now their engine was broken, and they were floundering about on the high seas about a mile offshore, tossed about like a cork.

“They were just marooned,” said James McDermott, president of the Nassau County PBA, who co-hosted a ceremony on Monday in Mineola to honor the officers.

The tide was heading out, and the swells were heading in, creating treacherous conditions. The boat could have easily done a nose dive and flipped over, said Officer Joseph Schoepfer, who headed the team of marine police.

The officers made their way to the stranded boat, an 18-foot Mako center console, not exactly the type of vessel designed to handle these kinds of heavy seas.

The police pulled up to the disabled vessel, and managed to get all of the passengers on board the rescue boat. Then they tied a line to the boat to tow it back in.

But the conditions were so bad that the rope snapped as they headed for shore. They went back and tied on another rope. Not long after, that line also snapped.

“We started to run out of lines,” Officer Michael Rasmussen said.

“While they were towing it in, the cleats were ripping off the boat, like a scene from Jaws,” McDermott added.

They finally made it back in through the inlet and approached the local Coast Guard station to dock. The fishermen “were very thankful that they were in safe water,” Schoepfer said.

Schoepfer, Rasmussen, and Officer Christopher Leek were honored Monday by the Nassau County Legislature as top cops for the month of October.

“Police officers are very modest people,” McDermott said. “They’re not going to blow their own horn. I’ll blow it for them.“

He added: “They do this and they think nothing of it.“

For their part, the officers indeed showed a “just in a day’s work“ attitude.

But Rasmussen did acknowledge “it was dangerous. As soon as we went out there we knew what we were in for, so we were prepared. We just kind of knew what to do.”