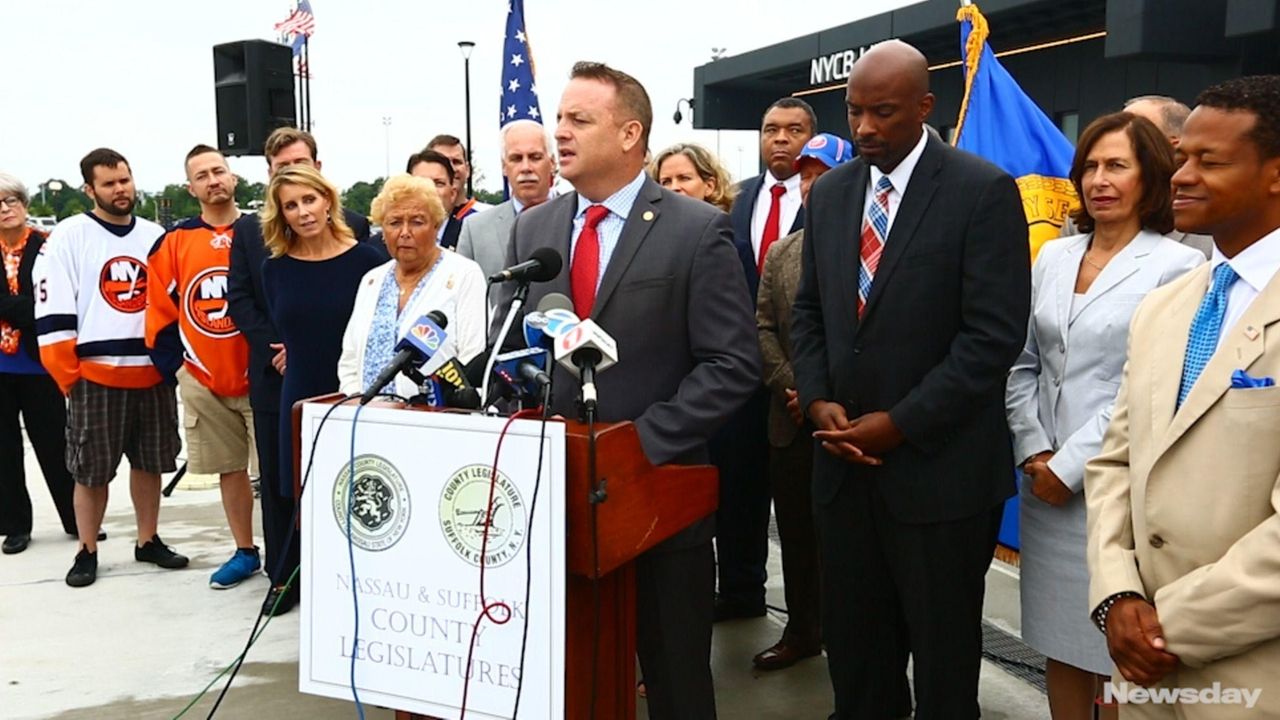 On Friday July 14, 2017, members of the Nassau and Suffolk legislatures joined forces at the renovated Nassau Coliseum to urge the New York Islanders to return to their former Uniondale home -- a move that both the team and the National Hockey League have been reluctant to support. Credit: Newsday / Chris Ware, Danielle Siegal

Members of the Nassau and Suffolk legislatures joined forces Friday at the Nassau Coliseum to urge the New York Islanders to return to their former Uniondale home — a move that both the team and the National Hockey League have been reluctant to support.

At a news conference outside the arena, lawmakers and business leaders argued that the Coliseum, which recently underwent a $165 million renovation, could be retrofitted to add back thousands of seats, increase the square footage of the locker rooms and build more luxury boxes and a team store.

Kevin Law, president of the Long Island Association, the region’s largest business group, said Nassau Events Center, the arena’s Brooklyn-based operator, will do “anything that needs to be done to bring this facility into NHL compliance” if the “Islanders commit to a substantial number of games” at the Coliseum.

Lawmakers from both counties Friday failed to provide a cost for the potential renovations or detail how a move back to Uniondale would improve the Islanders’ financial outlook.

But county legislators said they are not giving up hope.

“The time to bring them back is now,” said Suffolk Legis. Bill Lindsay (D-Oakdale), who noted that Islanders drew more fans in 2014-15, their final season at the Coliseum, than last year at the Barclays Center.

Nassau Presiding Officer Norma Gonsalves (R-East Meadow) said lawmakers need to provide the team with an “incentive” to return to the Coliseum.

“The Islanders want to come back here but we need to make it worth their while,” she said.

But the Islanders, who have played the past two seasons at the Barclays Center in Brooklyn, and the NHL have shown no interest to date in the team returning to the Coliseum.

Parking fee only gripe for fans at new Coliseum

The team, which declined to comment Friday, is planning to bid on a 28-acre tract of land at state-run Belmont Park to build a new arena.

NHL commissioner Gary Bettman reiterated this week in a statement to Newsday that the Coliseum, which seats 13,900 for hockey and has no public transportation, is not viewed by the league “as a suitable option for the Islanders.

But Nassau Legis. Arnold Drucker (D-Plainview) said Bettman, who was born in Queens and grew up an Islanders fan, “is totally wrong” and “doesn’t have any clue” what Long Island fans want.

“With this unanimity of people and elected officials, they have to listen to us,” Drucker said of the team and NHL.

The NHL did not respond to requests for comment Friday.