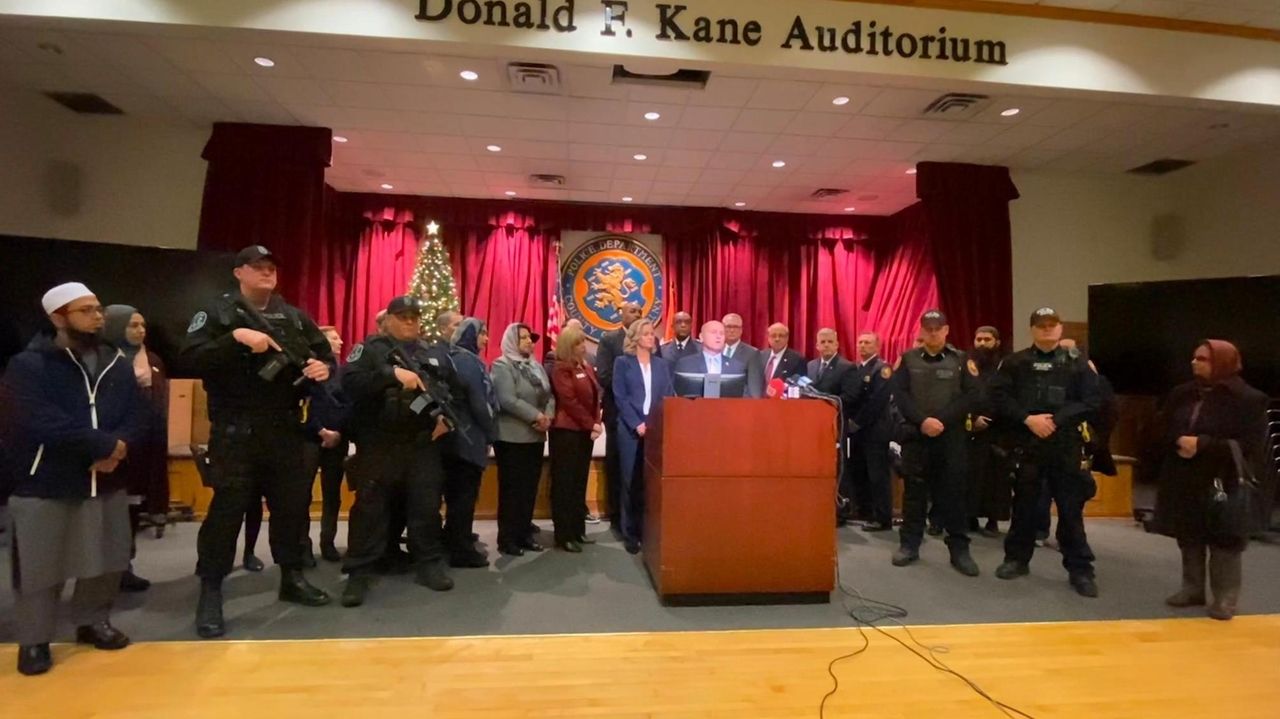 Nassau County Executive Laura Curran and Nassau County Police Commissioner Patrick Ryder on Thursday announced that security would be intensified around synagogues and other areas of concern. Credit: Howard Schnapp

Police in Nassau and Suffolk counties said Thursday they are beefing up coverage around Long Island synagogues following the targeted attack on a Jewish grocery store in New Jersey.

The effort reflects the growing anxiety after the attack on the kosher grocery store Tuesday, which left six people dead, including one police officer and the two shooters.

It also arrives shortly before the start of the Jewish holiday Hanukkah on Dec. 23 and amid an increase in anti-Semitic crime on Long Island. There were two recent incidents of swastikas spray-painted at the Holocaust center in Glen Cove, and a Queens man allegedly leveled an anti-Semitic rant against a rabbi in Inwood.

Both Nassau and Suffolk police said the extra police presence went a step beyond the usual increase in patrols that accompany the holiday season.

"When people are out shopping, they are going to see that presence," Ryder said. "We want to make sure they have a sense of security."

In Nassau County, Ryder said officers on foot patrol would be present along the shopping areas on Broadway in Lawrence and Main Street in Farmingdale, as well as neighborhood stores in Great Neck, the Five Towns and Wantagh.

Beyond the increased police presence, Nassau police officials are emphasizing an approach in which officers vary their patterns of patrol — not going to the same places at the same time each day, he said.

The county is becoming more diverse, County Executive Laura Curran said, and "we have to be candid about an alarming truth — we are seeing more hate crime."

The number of reported bias crimes has almost doubled from 34 last year to 61 this year, she said.

Nassau and Suffolk officials on Monday announced the formation of a bi-county anti-hate task force to address the rise in anti-Semitic incidents.

Suffolk County Executive Steve Bellone said at the time that Long Island would stand together against hatred.

"The only thing that allows hatred to consume us is when people of good faith refuse to stand up and call it out for what it is," Bellone said.

Nassau officials were joined Thursday by several leaders of the Jewish community and other religious groups.

Rabbi Anchelle Perl, director of Chabad of Mineola, said he appreciated the extra effort on the part of police.

"It'll send a strong message that the government here in the United States is part of the answer," Perl said, noting that his synagogue has been boosting security. "We now have armed guards, and now we're adding more and more aspects of security."

Mufti Mohammad Farhan, executive director at the Islamic Center of Long Island, said he attended the news conference as a show of solidarity against hate crimes.

"This is all intertwined," he said. "Those with hate in their heart, they could do this to anyone."

The mayor added, "Every single one of us must be part of this mission."