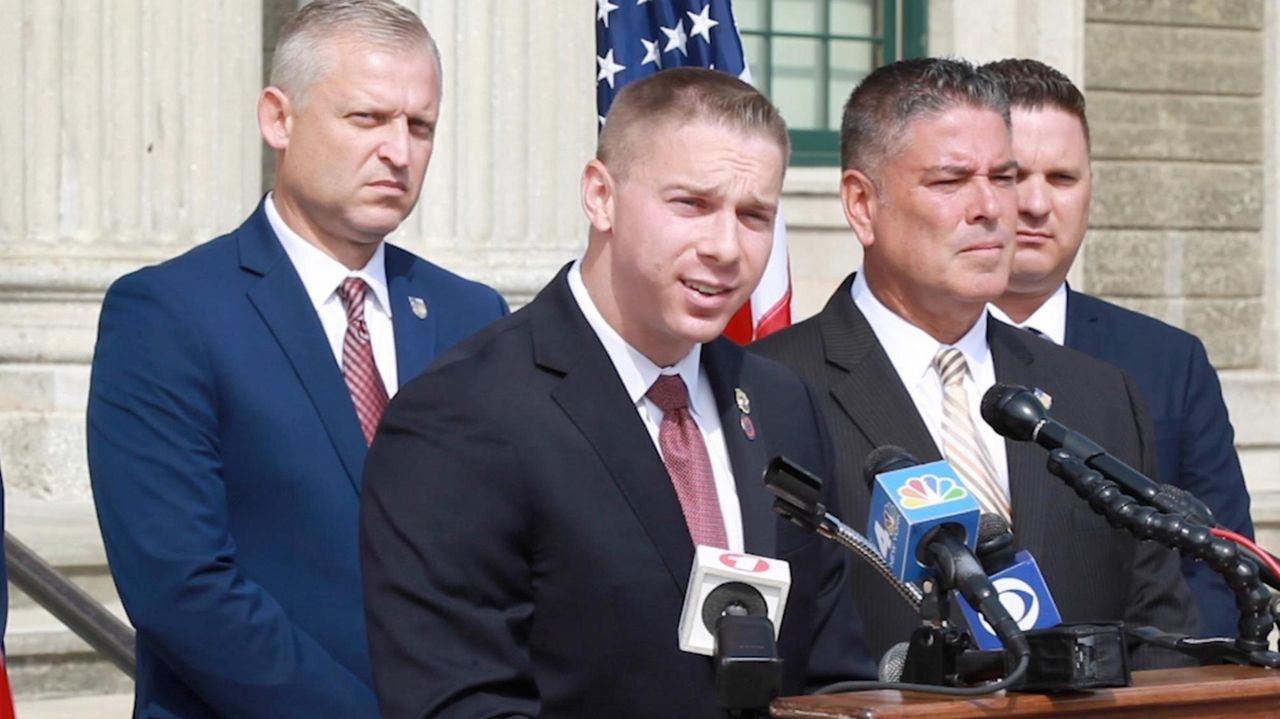 Nassau Legis. Joshua Lafazan rolled out a series of proposals on Monday to dually address county preparedness in active shooter situations and to protect local law enforcement from harassment while in the line of duty. Credit: Howard Schnapp

Nassau Legis. Joshua Lafazan rolled out a series of proposals Monday to dually address county preparedness in active shooter situations and to protect local law enforcement from harassment while in the line of duty.

The Nassau Legislature should form a permanent task force on crisis response to ensure that county businesses and public centers are prepared for active shooter situations such as this weekend's shootings in Texas and Ohio, Lafazan said at a news conference in Mineola with members of the Nassau County Police Benevolent Association.

The permanent standing committee would hold confidential hearings to learn from law enforcement officers, elected officials and crisis managers from cities across the nation that have been the scene of mass shootings, Lafazan (I-Woodbury) said.

"While there is no solace to be taken from these atrocities, knowledge can be gained and we may learn where similar vulnerabilities exist locally, where protocols and procedures can be updated and where immediate actions can be taken as a county to potentially prevent a disaster," Lafazan said.

Lafazan, a freshman lawmaker who caucuses with the Democrats, called on the 19-member, GOP-controlled legislature to convene a meeting with its largest hospitals to ensure they are ready for a mass casualty event, including securing blood donations and enhancing their  their emergency communications.

Presiding Officer Richard Nicolello (R-New Hyde Park) said the GOP majority "looks forward to receiving the details of the proposed committee. We will continue to support actions that protect the safety of our residents and communities."

Nassau County Executive Laura Curran said she recently directed the county's Office of Emergency Management to update and strengthen its existing emergency action plan while security and preparedness have been heightened at schools and houses of worship.

“We are not waiting until this epidemic reaches us," Curran said. "We’re taking action now to protect our residents.”

Lafazan, who at 25 is the legislature's youngest member, also suggested police enhance their dialogue with young people, encouraging them to spot the warning signs about potential acts of violence on social media.

El Paso, Texas, authorities believe Patrick Crusius, identified as the gunman who killed 22 people at a Walmart store there on Saturday, posted an anti-immigrant manifesto on the website 8chan before the attack.

"While some have become numb to scenes of unspeakable violence, we must never lose our sense of horror," Lafazan said. "We must never accept this as the status quo."

Nassau PBA president James McDermott said an increased law enforcement presence is needed in schools, malls, arenas and other large gatherings to prevent massacres, like those which occurred in El Paso and Dayton, Ohio, from repeating themselves on Long Island.

"To think it can't happen here, you're just kidding yourself," McDermott said.

Lafazan Monday also announced that he was introducing legislation that would make it a misdemeanor, punishable by one year in jail and a $1,000 fine, to harass police officers, EMTs, firefighters or first responders. The bill defines harassment as throwing or spraying water or another substance at a law enforcement official.

"This is a situation that cannot exist in this world …," McDermott said. "We cannot have anarchy. And whatever happens in New York City seems to trickle east to Nassau and Suffolk counties."

Similar bills to protect police and public safety officers have been proposed in the State Legislature and by the Hempstead Town Board.