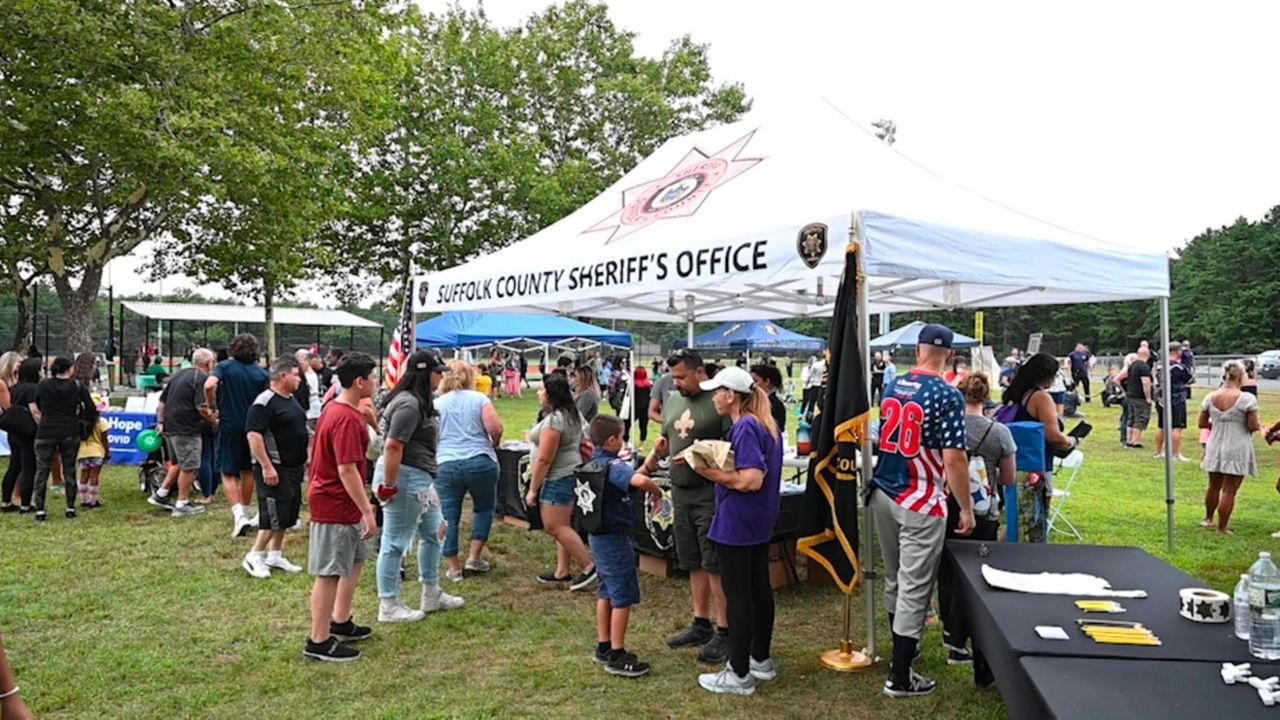 Suffolk residents gathered Tuesday night with members of the Suffolk County Sheriff's office at Fireman's Memorial Park in Ridge, as part of National Night Out  Against Crime, a night where community members and law enforcement get together.  Credit: Newsday / Steve Pfost

More than a year after demonstrators took to the streets to protest police violence in the wake of George Floyd's killing in Minneapolis, communities across Long Island gathered Tuesday evening with law enforcement to celebrate the 37th annual National Night Out Against Crime.

At Fireman's Memorial Park in Ridge, Suffolk County Sheriff Errol D. Toulon Jr. said National Night Out helps residents "understand what our law enforcement officers are doing and we can better engage with our community.

"They understand that we have a dangerous job every single day and so it’s another way for us to say thank you to our community," Toulon said.

Crystal Copelin, a Port Jefferson Station resident, attended the Ridge event for the first time with her three children, her aunt and mother.

She called the experience "informative" as the children learned about the officer’s equipment and jail buses."I think it’s an important part of my community and my children’s life to understand that law enforcement is here to protect them and what their jobs are in our community," she said.

In Hempstead, the state's largest village with 55,000 residents, hundreds were expected to convene at Denton Green Park for an event featuring pony rides, bounce houses, volleyball and kickball games with village police officers, music and food.

"We look forward to a day like this where we get to interact with our community and to spend time with the people we see on a day-to-day basis," said Det. Sgt. Derek Warner at a news conference earlier Tuesday in Hempstead.

Hempstead Mayor Mayor Waylyn Hobbs Jr. contends that while police departments across the country have faced struggles building relations with the community in the wake of Floyd's killing by a Minneapolis police officer — and the months of subsequent protests — village police have been proactive in fostering those connections, particularly among area youth.

"Trust is very important because when our police officers respond in emergency situations we want to have that trust, especially with young kids so they'll know that police officers are not the enemy," Hobbs said. "They are your friends and here to help you. And events like this help develop that trust."

Other National Night Out events in Nassau were to be held in Cedarhurst, Hicksville, East Meadow, Bethpage and Massapequa.

In Suffolk, County Executive Steve Bellone and Acting Police Commissioner Stuart Cameron were scheduled to participate in Night Out events and Sufffolk police hosted community residents at locations inside all seven precincts that featured police exhibits and demonstrations.

The Night Out initiative started in 1984 and is held the first Tuesday in August. The event, which was canceled across the country last year because of the pandemic, includes block parties, festivals, seminars and youth events.

With Steve Pfost and Keldy Ortiz