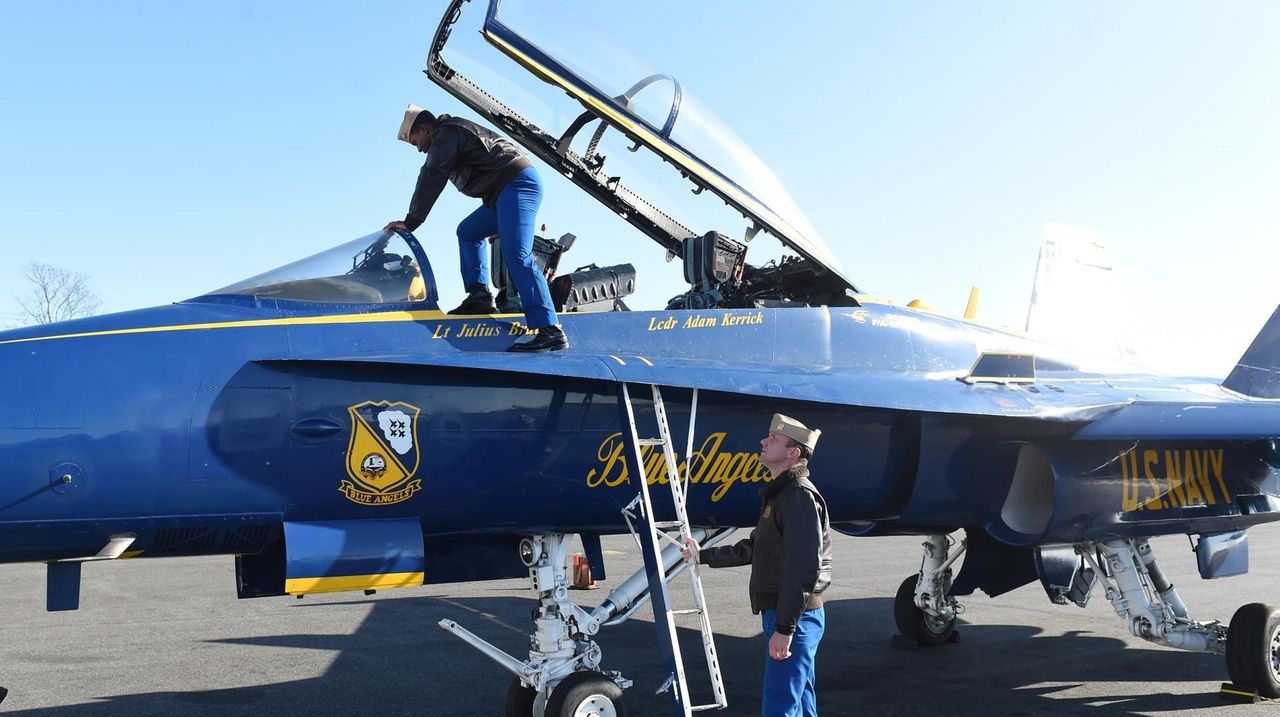 Two members of the U.S. Navy Blue Angels flew into Republic Airport in East Farmingdale on Thursday to begin preparations for the 2020 Bethpage Air Show at Jones Beach, the elite team's ninth appearance at the event. Credit: James Carbone

The weather outside may be frightful, but members of the nation's most recognized flight demonstration squadron are already planning for summer — and one of their signature air shows.

Two members of the U.S. Navy Blue Angels flew their celebrated F-18 Hornet into East Farmingdale's Republic Airport on a frigid Thursday afternoon to begin preparations for the team's ninth appearance as headliners at the Bethpage Air Show at Jones Beach State Park.

The 17th annual show will take place Memorial Day weekend on May 23 and May 24.

"We are excited to come in and give you guys a great show," said Lt. Commander Adam Kerrick, who is in his second year with the Blue Angels.

The Blue Angels, the world's second-oldest aerobatic team, typically perform about 60 aerial displays each year in roughly 30 locations across the country.

More than 367,000 people attended the squadron’s most recent headlining appearance at Jones Beach in 2018, according to the state Parks Department.

"It is a major event," said George "Chip" Gorman, regional director of the state Office of Parks, Recreation and Historic Preservation. "There is a considerable amount of planning that needs to be put in place to make sure it is a success."

The winter visit by Kerrick and his co-pilot, Lt. Julius Bratton, serve as the official kickoff to the Bethpage Air Show planning.

The pilots Thursday also met with officials from the Federal Aviation Administration, State and Parks Police, New York Terminal Radar Approach Control and Republic Airport, which will serve as the Angels' base during the show, to discuss planning and logistics.

The topics, officials said, included the Blue Angels' performance schedule, lodging, preflight briefings, securing FAA waivers and controlling the air space during the show. Kerrick and Bratton then toured Jones Beach before they return to their base in Pensacola, Florida, on Friday.

"You can't plan far enough in advance," Gorman said, noting that his team will begin preparing for the air show a year in advance to address any issues or concerns.

The Blue Angels will visit a host of cities holding air shows throughout December before flying cross country next month to El Centro, California, to begin 10 weeks of training, Kerrick said.

The squadron will practice three to four times a day — or about 120 times in total — before beginning its performance schedule, which runs from March through November.

"Our demonstration is based on repeated, safe results," said Kerrick, a Philadelphia native who will perform in his first Jones Beach show. "So you will see the same outstanding show year after year."