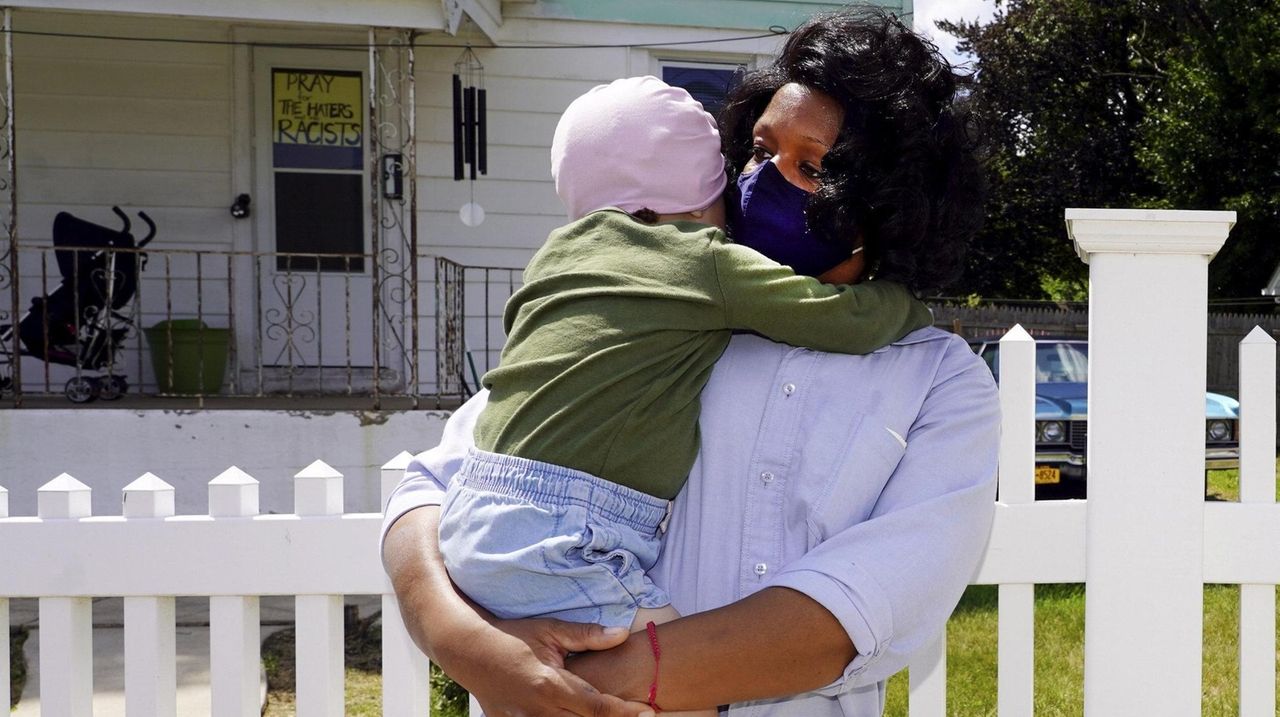 Jennifer McLeggan, of Valley Stream, has posted a sign on her front door and her fence alleging that her neighbor has been racially harassing her. Newsday's Daysi Calavia-Robertson has more. Credit: Newsday; File footage; Photo Credit: Howard Schnapp

A Black Valley Stream woman's accusation that a neighbor has waged a yearslong racial harassment campaign against her has sparked a police investigation.

A sign on the front door of Jennifer McLeggan's Sapir Street residence Monday read in part: “My neighbors have been racially harassing me since I purchased my home. … They have said I can be ‘erased.’ … I live in FEAR for my life at home.”

The image has been retweeted nearly 10,000 times, bringing widespread attention to the dispute from elected officials, activists and residents. Activists marched through Valley Stream Monday night to show support for McLeggan and another protest is planned for Thursday.

Nassau police said Monday they are investigating McLeggan's allegations as well as countercharges of harassment made against her by the neighbor, who is white.

“The lady put some signs on her fence and her front door saying she’s being harassed because it’s racially motivated,” said Police Commissioner Patrick Ryder Monday, though he did not list what specific actions she believes stem from race. “The neighbor on the other side, he said that he’s being harassed.”

Ryder did not provide information on the nature of the man's harrassment allegations against McLeggan.

He added that the neighbor has been seen on an Instagram post with a BB gun-style rifle.  Ryder said the man legally uses the BB gun to shoot items in his backyard.

“We’ve spoken to both parties, we brought it down a little bit,” he said. “We’re still investigating it. We’ll continue to follow up with both sides.”

The neighborhood clash caught the attention of area elected officials.

“Nassau County will not tolerate any resident being harassed or intimidated because of who they are or what they look like,” said County Executive Laura Curran. “We take these allegations seriously, and the Nassau County Police Department is conducting a thorough investigation.”

Assemb. Michaelle Solages (D-Valley Stream) said she has been contacted by at least 100 residents about the accusations.

“We must make sure that hate is not allowed in our community,” Solages said. “The community stands behind Jennifer in her time of need.”

The public dispute comes four years after McLeggan bought the home where she lives with her 2-year-old daughter.

“The problems with him began almost from the minute I pulled up in the moving van,” McLeggan said. “But over time, it’s gotten worse and worse.”

The neighbor could not immediately be reached for comment Monday.

Tensions started with a complaint from the man about the height of some of her trees, McLeggan said, adding that she paid thousands of dollars to cut them down.

“After the tree thing, I put a fence up around my property so he called the village’s code enforcement saying I hadn’t gotten a permit to put it up,” she said. “I got a summons for that … I mean, it’s just been one thing after another.”

She claims he put dead squirrels and feces on her lawn.

McLeggan said she has called the police on her neighbor several times but stopped seeking the department's help.

"When the cops showed up here they said, 'you know, he's kind of old. He's been here the longest, try to get along with him, that's how he is,' " she said.

Police did not immediately respond to McLeggan's description of past visits.

She was so unnerved by the exchanges with her neighbor, McLeggan said, that she installed security cameras. She said the cameras captured the man on her property.

At Monday's protest, Terrel Tuosto, 28, co-founder of @lipeacefulprotests — an Instagram account where updates about Long Island demonstrations are shared — said the situation involving McLeggan and her neighbor is another example of efforts designed to stoke fear among Black residents.

“Trying to make us afraid of being Black, making it clear they don’t like the color of our skin,” he told a crowd of about 80 gathered at Fireman’s Memorial Field in Valley Stream Monday afternoon.

Other Valley Stream residents have come to McLeggan's side.

Courtney Ross, 26, said after learning of the issue on Facebook, she was moved to buy a bouquet of colorful daisies to drop off Monday at McLeggan's front door.

"It's just really heartbreaking that someone is treating her like this,” she said.

Ross was greeted by McLeggan at the door Monday, where she handed her the flowers and the two embraced. Not long afterward, others with flowers followed.

"Thank you," McLeggan said. "Thank you so much."