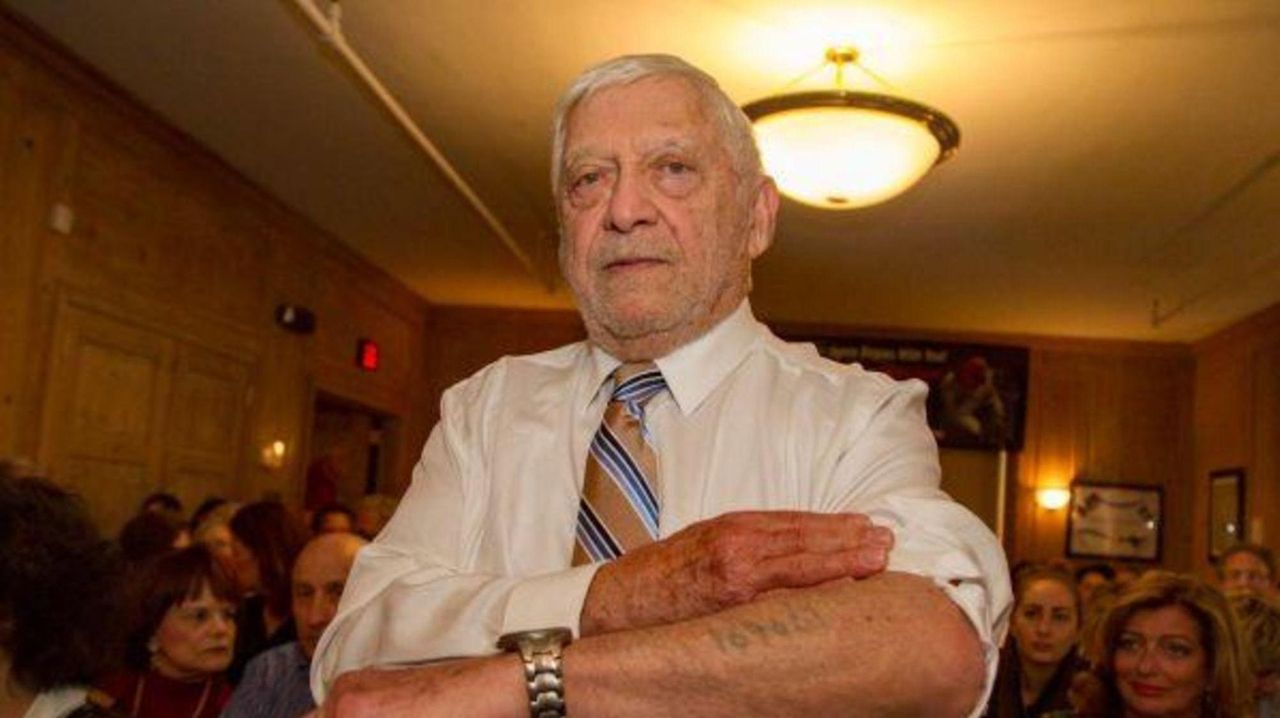 René Slotkin, now 79, was sent along with his family to the Auschwitz-Birkenau concentration camp in 1943. On Sunday, April 23, 2017, Holocaust Remembrance Day, Slotkin spoke to about 150 people at the Holocaust Memorial and Tolerance Center of Nassau County in Glen Cove about the terrors he endured. Credit: Howard Schnapp

Fraternal twins who survived Dr. Josef Mengele’s Holocaust experiments called on people to “never be silent in the face of prejudice and human suffering” at a Holocaust commemoration event Sunday.

Irene Hizme and René Slotkin, 79, said that while discussing their time at the Auschwitz-Birkenau concentration camp is painful, they have to remind the world of the “evil unleashed there,” especially as hate crimes rise across the country.

“Every human being has a personal responsibility to fight hate,” Hizme told about 150 people at the Holocaust Memorial and Tolerance Center of Nassau County in Glen Cove. “The truth is on our side, and the road to Auschwitz is paved with silence.”

Hizme and Slotkin, who were born in Czechoslovakia, were 6 years old when they were taken to Auschwitz-Birkenau and separated from each other and their mother, Ita Guttmann — who was killed at the camp — in 1943. Hizme said she was regularly injected with unknown substances in experiments supervised by Mengele, the so-called “Angel of Death.” Slotkin was a “control subject,” used as a comparison to his sister.

“It was much worse than you think or saw or heard,” Slotkin said Sunday before the start of Holocaust Remembrance Day, which ends Monday at sundown.

Hizme, who has multiple sclerosis, said she was often sick at the camp’s hospital and avoided one of the “periodic purges of patients” by hiding under a nurse’s skirt.

“I cannot tell you what a day in Auschwitz was like or what I did on any given day, but the unimaginable things I saw and experienced are etched in my psyche for all time,” Hizme said.

Hizme and Slotkin are believed to be one of the last sets of twins to survive Nazi experiments. Of the 7,000 prisoners who were experimented on, 3,000 were twins, said Beth Lilach, the memorial’s senior director of education and community affairs. Only 160 twins survived the camp.

Hizme and Slotkin, who were at Auschwitz until it was liberated in 1945, said they saw each other only once — from afar.

The twins were reunited in 1950 with help from some unlikely people, including an associate of the notorious gangster Al Capone. The associate reportedly put a word in to the White House about the pair’s troubles.

Hizme and Slotkin were adopted by the same family, the Slotkins, who lived in Lawrence. Hizme became a chemist and lives in Oceanside. Slotkin worked for 30 years for a paper-folding company in Valley Stream and now lives in Manhattan.

CORRECTION: An earlier version of this story incorrectly identified the role of Capone and his associate in helping reunite the twins. The roles were misstated in a speech at the Holocaust Memorial and Tolerance Center of Nassau County on Sunday, center officials said.