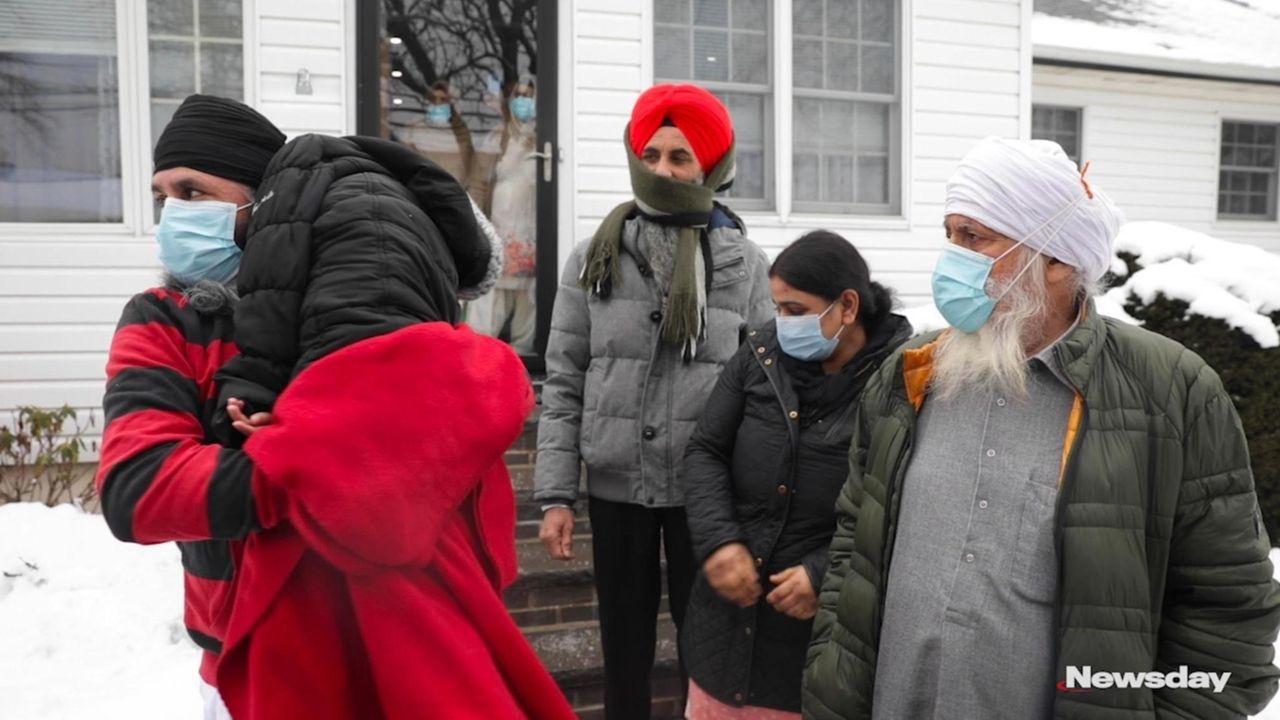 A New Hyde Park father held in immigration custody since June was released Tuesday morning and reunited with his family as he continues his legal fight against being deported to his native India, his family and attorneys said. Credit: Reece T. Williams

A New Hyde Park father locked up in immigration custody since June was released Tuesday and reunited with his family as he continues his legal fight against being deported to his native India, according to his family and attorneys.

Sukhdev Singh, 47, was freed from immigration custody at a New Jersey federal facility before noon and about two hour later rejoined his wife Rajwinder and the couple’s three daughters, including 8-year-old disabled Ashmeet.

"Thank God I see my family in America," Singh said to reporters after stepping out of white SUV in front of his home and holding daughter Agamjot, 5. "I am very happy now."

Moments later, Singh turned to the front steps and held Ashmeet, 8, as she was brought out of the house, caressing her face and saying she was a special child.

Later, in a telephone interview with Newsday, Singh said that he was planning to bask Tuesday night in the company of numerous relatives and dine on a feast of vegetarian Indian food.

The case of Singh made headlines in Newsday last year after he was whisked away on June 8 by federal agents — despite his role in caring for Ashmeet — as a prelude to his being deported.

Ashmeet has been brain damaged since birth and cannot speak. Ashmeet also has cerebral palsy and epilepsy and must be fed through a special tube.

The prospect that Singh would be returning home had buoyed the family spirits immensely after months of uncertainty, said his sister-in-law Kamljeet Kaur of Queens. The Singhs have another daughter Avroop, 6.

"I cannot even explain it, the house is so positive right now," Kaur said late Monday night about her sister Rajwinder and the release of her husband.

Attorney Allen Kaye, who is of counsel to the Manhattan law firm of Pollack, Pollack, Isaac & DeCicco, said that Singh was literally on "the brink" of being deported when the legal process slowed down over the summer.

The election of President Joseph Biden, who is taking a more restrictive stance when to resort to deportations, may have also helped Singh, said Kaye.

Singh had been in the United States since 1999 when he was ordered removed after his asylum application was denied.

Despite the removal order, Singh was allowed to remain in the country for over 20 years with Rajwinder and their children and work as a cabdriver as long as he checked in periodically with the government. But according to Nelson Madrid, another attorney on Singh’s case, a former attorney from years ago didn’t pursue other possible options for him to remain in the United States.

After Singh was taken into custody he was sent to an immigration holding facility in Louisiana and was on the verge of deportation when a federal judge issued a temporary stay. But in November, a federal magistrate ruled that the court didn’t have jurisdiction over Singh’s case.

After Singh contracted COVID-19 in immigration custody, Madrid said he arranged with immigration officials to have him return to his home in New Hyde Park under an order of supervision while his case is pending. What worked in Singh’s favor was that he had no criminal record and has a wife and three children who are American citizens, said Madrid.

"It is a great thing," Madrid said of his client's release. "I am so elated. This is why you become a lawyer."