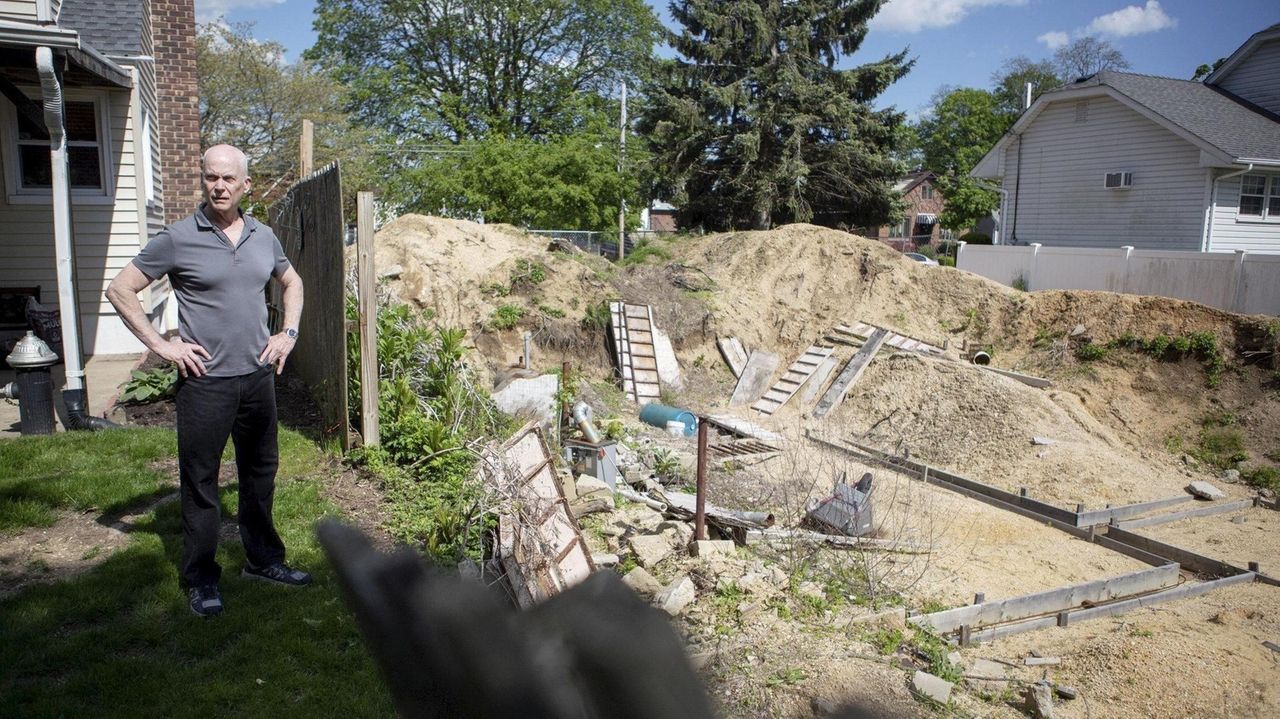 North Bellmore resident Daniel Butler has lived next to a 12-foot-deep crater, which has stayed open for about two years after a house was torn down on the property. Butler said he is cautiously optimistic the hole will soon be filled. Credit: Newsday / Jesse Coburn

Almost every morning for two years, Daniel Butler has woken up in his tidy North Bellmore home, pulled back the blinds, and looked out at a giant hole.

Butler, 61, said he isn't too fond of the hole, which a prior neighbor left after tearing down a house that had stood there. It is about 12 feet deep and spans most of the lot next to Butler's Virginia Avenue home.

Even worse is that the hole has grown, Butler said, eventually swallowing part of his fence and backyard.

"It's just kind of disheartening," he said on a recent afternoon, sitting on his back porch next to the crater of dirt. "You don't really want to have barbecues out here anymore."

Now, after numerous complaints to the Hempstead Town Building Department, the hole may finally soon be filled. A contractor put in a retaining wall last week, Butler said, and the new property owner said work is beginning on a new house there.

Even so, Butler hasn't forgotten the years of forced neighborliness with the hole, whose origins remain mysterious to the retired FDNY chief.

The saga began when his former neighbor died a few years ago, and the property changed hands, Butler said.

The new owner tore down the one-story bungalow on the site and excavated space for a new foundation, Butler said.

After that, nothing happened — for years.

Raymond Schwarz, supervisor of inspection services in the town Building Department, said Hempstead issued a permit for the property in August 2017 to build an addition. But "when they started work, they found that the existing foundation was not sufficient to build on and they demolished the premises without a permit."

Wind and rain gradually eroded the hole, Butler said, causing its edges to expand outward. Eventually it claimed part of  his fence and yard, he said. He asked the town repeatedly to intervene, without much luck, he said.

"With the taxes we pay, you'd think the town would be a little bit quicker [to] come in, do something," he said.

Schwarz said the property came to his attention only recently, when he received reports of the hole encroaching on neighboring properties, creating a hazard. "It wasn't endangering anybody's property until now," he said.

"I'm really sorry that the neighbors had to deal with the problems, but again it had nothing to do with my ownership of the property," she said. "Those are pre-existing conditions, and they are being taken care of."

Butler said he is cautiously optimistic that the hole will soon be filled.