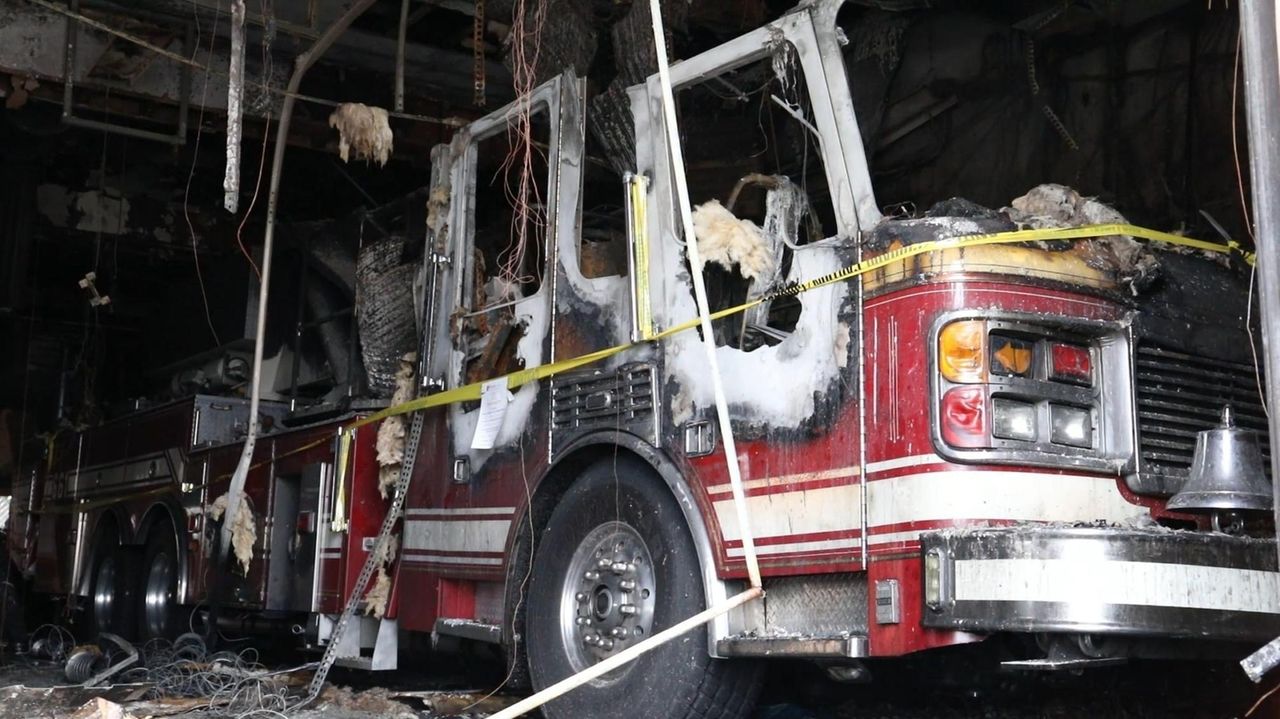 North Massapequa firefighters say community outreach has been swift and touching after the Christmas morning blaze that destroyed their firehouse. Credit: Morgan Campbell

North Massapequa firefighters vowed on Friday to rebuild and "not miss a beat" in protecting the community, as a crew drilled and boarded up the front entrance of the fire station following a devastating Christmas morning blaze that destroyed their fire trucks and ambulance.

The firefighters described the blaze as a "worst nightmare" coming true, but said the support that has come afterward, including hundreds of pieces of donated equipment and thousands of positive messages, drove a sense of optimism among the distressed members of the department.

So far, the agency has received a loaned engine from the East Meadow Fire Department, an ambulance from a vehicle manufacturer and temporary use of a South Farmingdale Fire Department substation. Since Wednesday, first responders have used the department's second station on Hicksville Road to respond to calls.

As the agency continues to assess damage, firefighters said they are ready to pick up the pieces and get back to work.

“It’s unfortunate we have to go through this time. But everybody should know we are here stronger than ever,” said Ralph Raymond, a North Massapequa Fire District commissioner and a former fire chief. “We will be able to not miss a beat and perform fire protection for the community.”

On Friday, firefighters moved two damaged engines out of the burned truck room — one further step to take before rebuilding could start.

A Christmas display of snowflakes still hung on a bush by the entrance floor that was covered with rolled-up metal pieces, charred debris and scattered fire tools. On the front of the building, only a few letters remained from what used to say “NORTH MASSAPEQUA F. D.”

Firefighters who watched the morning cleanup in solemnity became emotional as they spoke of the irony of the fire that broke out at their second home.

Chief: 'We will come back better'

“It's very surreal. It was like a worst nightmare come true,” said Joseph Pesale Sr., father of the fire chief. “What unfolded with every one of us that morning [happened] at a time … with peace on earth and children getting up for Christmas. And we came here.”

Like many of his fellow first responders, Pesale Sr. woke up to his pager as it went off at 6:05 a.m. Wednesday, alerting of a building fire on 1000 North Broadway.

The former fire captain got up and wondered if it was a false alarm. As he was getting dressed, Pesale Sr. said he saw his son’s car — with its lights on — rushing down the street toward Broadway.

“I could hear his transmission saying that he responded to the scene. … [Then] all of a sudden, I heard an explosion,” Pesale Sr. recalled Friday. “And I knew that something was going on.”

When Pesale arrived at the firehouse minutes later, he joined others as they watched their station engulfed in flames and smoke while more explosions — likely fueled by oxygen bottles and combustible liquids — kept them from going inside.

“You got up here that morning to watch the flames roll out. The equipment that you needed to put out the fire was in the fire. … You feel helpless,” said Joe Canova, a third-generation firefighter. “It was unreal. It was the last thing in your life you ever want to see.”

For a couple of minutes, a group of experienced firefighters found themselves in a similar situation to the fire victims they help day in and day out.

“I know how the homeowners feel when their houses are on fire,” Canova said. “They feel trapped, and there’s nothing they could do except to wait for the firefighters to get there.”

On Christmas morning, their fellow firefighters arrived at the burning headquarters within minutes.

First, it was the members from the department’s second station. Soon afterward, first responders from about two dozen surrounding fire departments followed. The team effort got the quickly spreading blaze under control in about half an hour, fire officials said.

When all was said and done, the fire department lost a ladder truck, two fire engines, an ambulance and the physical reminders of the memories they shared at the headquarters.

Fire investigators said on Friday that the incident started from the ladder truck.

Fire officials said the department will install a sprinkler system, which didn’t exist and was not required when the structure was built decades ago, when reconstruction begins. The building has an alarm system, which was activated Wednesday.

Loaned equipment easing pain of blaze at firehouseOfficials with the North Massapequa Fire Department said support has been "overwhelming."

4:04 COVID-19: From 799 deaths in one day to vaccine being 'passport' back to normalcy
Nassau signs lease to convert underutilized gym into youth sports center
Nassau School Notebook: Great Neck South wins Science Bowl
Way to Go! Mineola senior launches college help website
Cuomo: NY pushing toward reopening, agreeing to limit COVID-19 powers
How to get a COVID-19 vaccine appointment
Didn’t find what you were looking for?