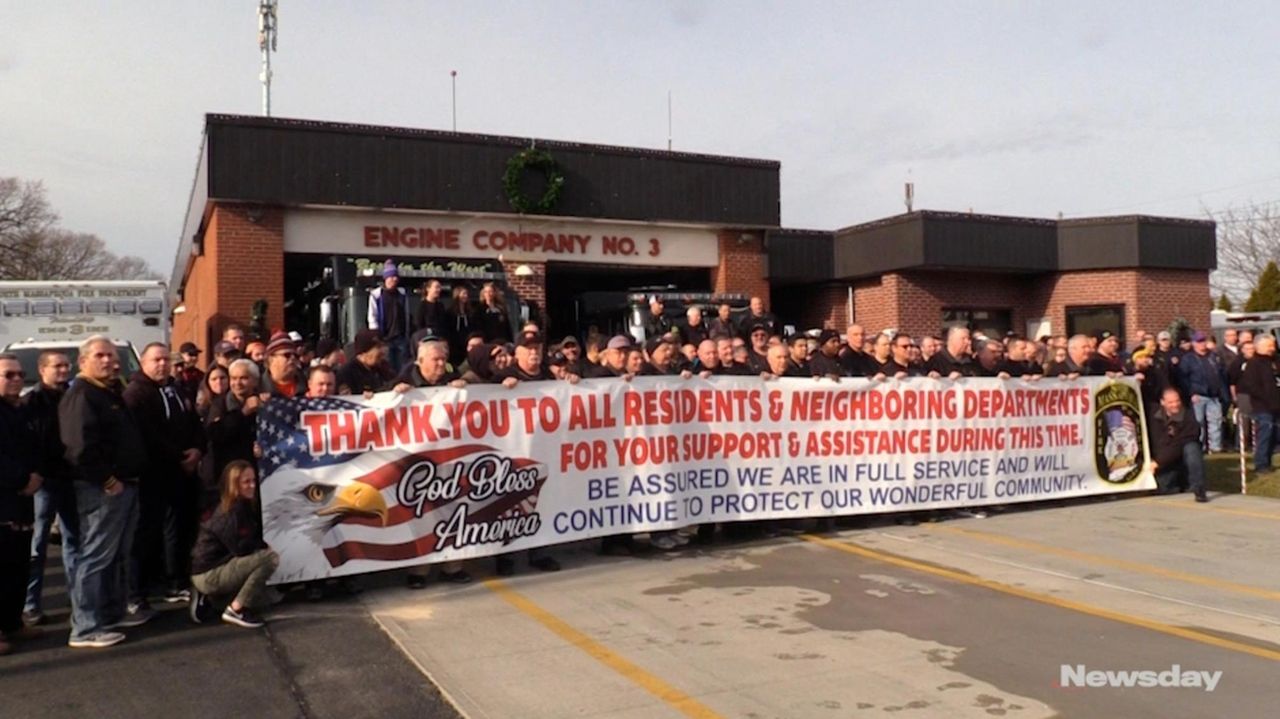 North Massapequa Fire District Commissioner Ralph Raymond spoke about the firefighters and commissioners from around Long Island and Westchester that gathered Sunday at the fire department’s Engine Company Three firehouse. The group gathered to show their solidarity after a Christmas Day blaze severely damaged one of the department's firehouses. Credit: James Carbone

Loaner trucks and a temporary home in South Farmingdale are bringing the North Massapequa fire department closer to fully restoring service following a Christmas Day blaze that severely damaged one of its firehouses.

On Sunday morning about 100 firefighters and commissioners from around Long Island and Westchester gathered at the department’s Engine Company Three firehouse on Hicksville Road in Massapequa for an update on the situation and a show of solidarity.

South Farmingdale Fire Department Chief Mike Mackie said the commissioners from the two districts have worked out an agreement for the displaced firefighters to use a department substation on Merritts Road at Beverly Road indefinitely and rent free. The firehouse has been used recently for administrative purposes, Mackie said.

“It’s always important to have a firehouse for the guys to go to … a place to put their rigs and gear,” Mackie said. “Brotherhood and sisterhood is what it’s all about, we’re here for each other.”

North Massapequa Fire District Commissioner Ralph Raymond said it could take a year for the district to permanently replace the two engine fire trucks, a ladder truck and an ambulance.

Copiague-based Commander Equipment Supply, a company that sells firetrucks and emergency vehicles, has lent the fire department a ladder truck with a 110-foot ladder that can pump 1,000 gallons of water a minute.

“Part of the fire service community, when something like this happens, everyone comes together,” Commander Equipment Supply president John Heidrich said. A new ladder truck would cost $1.2 million, he said. The loaner, a ladder truck that previously belonged to the Woodmere Fire Department, is valued at about $100,000, he said. The truck had been traded in and Heidrich said he expects it will be sold eventually to a rural fire department or to a South American country.

The East Meadow Fire Department also loaned a fire engine truck to North Massapequa. Raymond said he expects to finalize the loan of an ambulance this week.

The cause of the fire is still under investigation, Raymond said.

Bellmore Fire Department Chief Pete Schmalenberger said he understood the loss from his department’s own experience in 2001 when its firehouse burned down.

“We know what they’re going through,” Schmalenberger said. “Just like somebody losing their house in a fire, they’ve lost their home ... Whatever they need, call us. We've got their back."