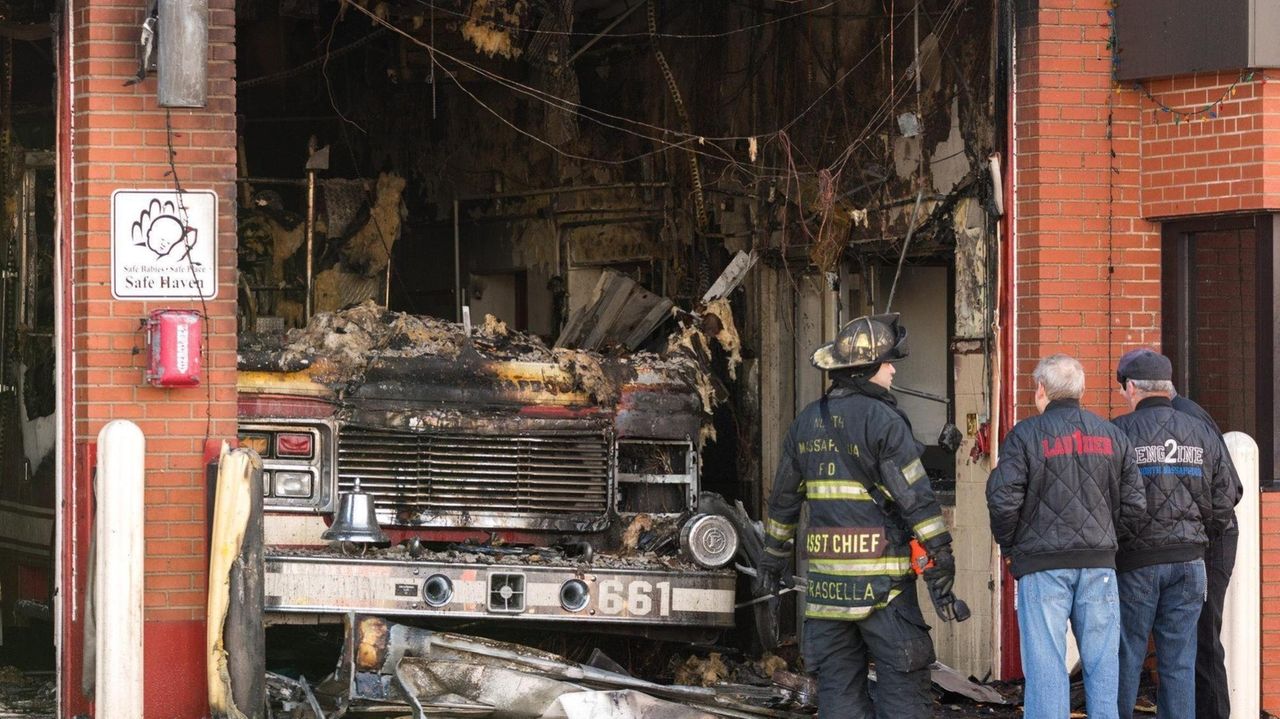 No one was inside the firehouse at the time, North Massapequa Fire Department Chief Joseph Pesale said. The blaze destroyed two engines, a ladder truck and an ambulance, according to Pesale.

“We made an attempt to get the trucks out of the building,” he said. “There were three small explosions that prevented us.”

“We got alerted early this morning. State troopers had seen smoke coming from the building,” Pesale said. “First arrival was myself and a lieutenant. Smoke was coming from the truck room [and] the front bay doors.”

Pesale said firefighters rapidly got the fire under control.

“It was a quick knockdown,” he said. “Our fire wall held, which kept it from the main part of the building.”

Arson investigators were at the scene, although their presence doesn't necessarily indicate that the fire was the result of foul play because they are often called to severe fires, the police spokesman said.

“At this time, it’s believed it’s not suspicious,” he said.

Pesale grew emotional, his voice breaking, as he talked of the irony of a major fire at his firehouse and how “it hurts tremendously.”

“This is what we do on a daily basis to help everybody, and it happened to us,” he said. “It’s tremendous. And on Christmas.”

Referring to the firefighters who battled the blaze, he said, "They came from their families and they’re here."

Twenty to 25 departments responded to the fire, Pesale said.

The North Massapequa department already is in contact with other departments to coordinate fire protection in the area, and “people are willing to give us equipment and fire houses and whatever we need,” he said.

Brian Farrell, co-founder of Terry Farrell Firefighters Fund, which donates cash to first responders and fire equipment to agencies in need, said Wednesday evening that he planned to call North Massapequa fire officials Thursday morning to see how he could help.

“They are a little traumatized right now. … I’m waiting to talk to them tomorrow,” Farrell said. “Whether it’s financial [help] or equipment … anything we could do.”

Farrell, whose fire department in Wantagh was among about two dozen departments that responded early Wednesday morning, estimated the equipment loss at more than $2 million, including $1 million for the ladder truck, $1 million for the two engines and $350,000 for the ambulance.

North Broadway was closed in both directions from North Poplar Street to North Syracuse Avenue because of the fire.

The department has three companies and 90 volunteers, according to its website. The 2020 budget for the North Massapequa Fire District, which oversees the department, is $3 million.

Loaned equipment easing pain of blaze at firehouseOfficials with the North Massapequa Fire Department said support has been "overwhelming."