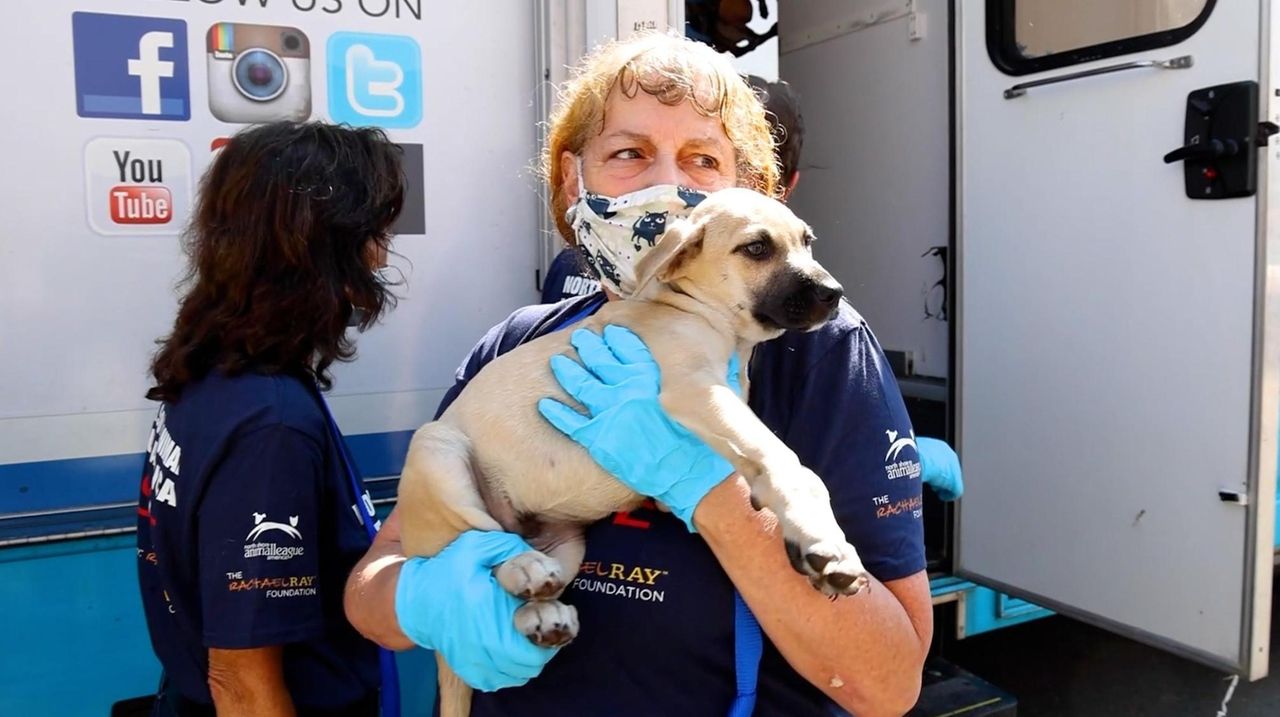 More than 50 young dogs and puppies arrived at the North Shore Animal League America's headquarters in Port Washington on Monday after a four-day trip from Louisiana and will soon be up for adoption. Newsday's Cecilia Dowd reports.  Credit: Howard Schnapp

More than 50 homeless puppies and young dogs looking for a second chance arrived in Long Island on Monday from storm-ravaged parts of the Gulf Coast.

North Shore Animal League America said the dogs were rescued from animal shelters in Louisiana, Texas and other places to make room for pets lost or displaced during Hurricane Ida.

Volunteers and staff carried the 55 pooches one by one out of North Shore's large transport truck, which made the four-day journey from Shreveport, Louisiana, to its Port Washington headquarters. Tails wagging, the pups excitedly greeted a gaggle of reporters outside their new temporary home.

Rescue Team Leader Ted Moriates said the dogs, which included 46 puppies and one expectant mama Labrador, did not have owners and could have been euthanized due to lack of space at the Gulf Coast shelters.

"Space is a commodity in the shelter world," Moriates told reporters on Monday after making the long trip. "[Homeless animals] are being euthanized left and right to just keep these places going because there are so many animals out there that are coming in on a daily basis."

The transport truck delivered a large number of donations to shelters in the Gulf Coast region before picking up the dogs rescued by North Shore’s Shreveport partner, Paws4Life.

Moriates said he and another staffer were able to keep the dogs comfortable, walked and well fed during the trip.

He said the truck is a climate-controlled mobile adoption unit with running water.

"It's incredible," he said. "Frightened dogs that won't walk, that won't even look at us [are now] our best friends. They want hugs, they want love. It’s a very stressful situation, so to see these animals make that change and really come around is just heartwarming."

Sylvia Ottaka, senior director of rescue and community outreach for the North Shore Animal League, said the dogs will be evaluated by a medical team and behaviorists before going up for adoption.

"We have a really passionate team so it’s going to be all hands on deck to take care of these animals," she said, noting that adoptions could start as early as the end of this week or next week.

"When you rescue a shelter animal, you're not just rescuing one life, you’re actually rescuing two lives," she said. "You’re rescuing the animal that you're bringing home that day, making them a part of your family, but you're also opening up a cage so that we can then go rescue another animal."

Affordability and open space are the allure in Middle Island
LIers could get hit with $35 toll driving in Manhattan
Can vaccine holdouts on Long Island be swayed?
CDC director: Booster shots were expanded 'to stay ahead of the virus'
Suffolk led NY in vehicle-related fatalities, crashes last year, data shows
Hochul preparing for possible hospital staff shortages
Didn’t find what you were looking for?