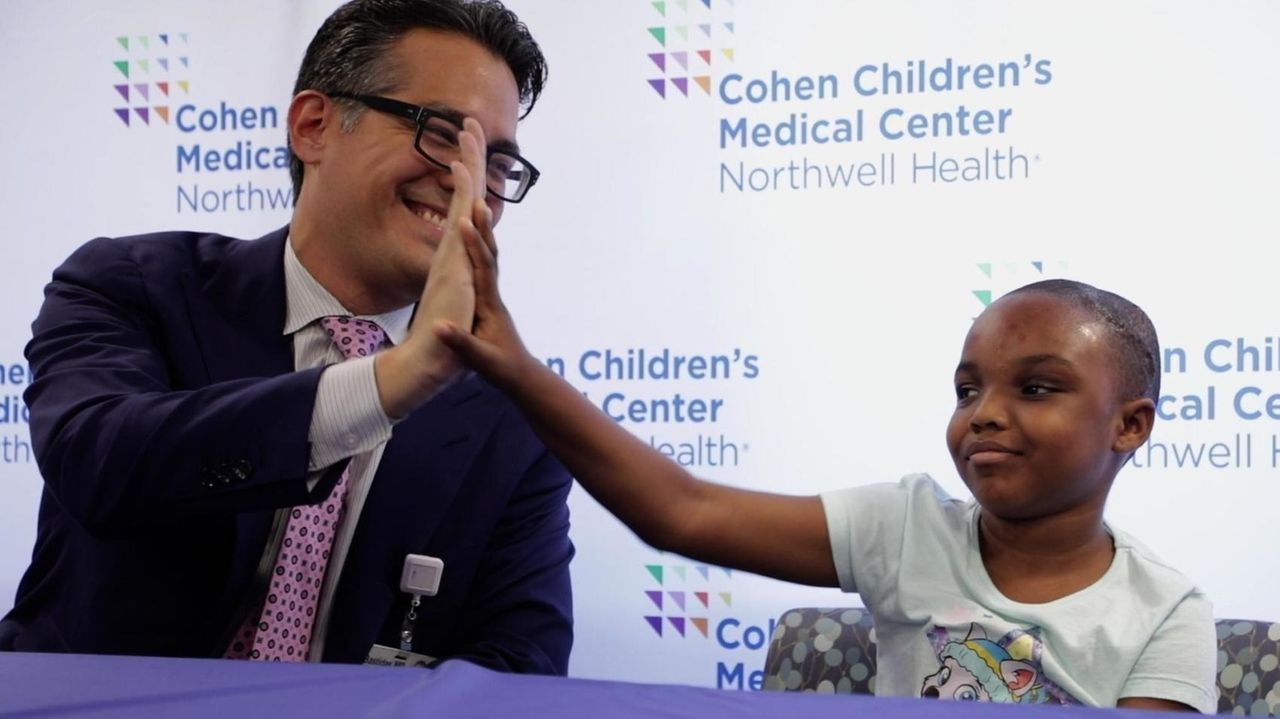 Seven-year-old Savana Patterson of Ghana spoke Thursday at Cohen Children’s Medical Center in New Hyde Park about her recent facial reconstructive surgery there, and how she wants to be a doctor when she grows up. Credit: Newsday / Yeong-Ung Yang

More than a year after Patterson’s 7-year-old daughter Savana was hit by a truck, sustaining serious injuries, she underwent facial reconstructive surgery at Cohen Children’s Medical Center. At an emotional news conference at the New Hyde Park hospital, which is part of Northwell Health, Patterson marveled at the transformation in his daughter.

“I happen to believe in God and I also believe in medicine,” Patterson said. “The result is what I have right now. She’s looking fantastic.”

Savana Patterson was hit by a truck on Jan. 15, 2017, while standing on the street waiting for her school bus in Ghana, where she was living with her paternal grandmother.

“She was mowed down, basically, by the truck,” Patterson, of Floral Park, said.

Savana, who suffered injuries to her upper eye socket and forehead, was placed in a medically induced coma in Ghana for six weeks, said Dr. Nicholas Bastidas, the plastic surgeon in charge of her case.

Rather than have his daughter undergo surgical reconstruction in Ghana, Patterson brought her to the United States this March, where she began the process of facial reconstructive surgery at Cohen Children’s Medical Center.

Before her surgery on June 4, Savana’s brain could be seen pulsing through the skin on the left side of her forehead, Bastidas said.

When he first saw her, Bastidas said, he thought it was a miracle that she was walking and talking the way she was.

CT scans take multiple images of the skull to create an accurate model of the patient’s anatomy, which is then used to simulate the operation. While three-dimensional reconstruction is not a new surgical resource, it is fairly new to the field of pediatrics, Bastidas said.

“I can really tell where the defect is and what needed to be cut and contoured,” he said.

Unlike most adults, children are still growing, so any surgical material used has to be able to grow with them, limiting the options to the patient’s own tissues and bones, Bastidas said. In Savana’s case, the surgical team harvested a section of bone from the back of her head. They used CT scan imaging to create cutting guides for the bone section they would use, ensuring greater accuracy at the time of the operation, hospital officials said.

It usually takes two to three weeks to recover from the five-hour surgery, but Savana, 10 days out of her reconstructive surgery, showed no signs of it Thursday other than the scar running down her forehead.

“I am brave,” she asserted.

Savana’s experience has motivated her to study medicine in the future, she said.

“I want to be a doctor to take care of people,” she said. “And so that I know a lot of things, like spelling and vocabulary.”

Although the soon-to-be third-grader still has a ways to go, Bastidas presented her with a dictionary to pave her way to a larger vocabulary.

At the news conference, Savana gave her tear-streaked father, an avid Yankees fan, an early Father’s Day present — a Didi Gregorius jersey. Patterson expressed hope that their Father’s Day plans would include watching baseball, though that might be difficult because Savana doesn’t like baseball.

But whatever they do, Patterson was just grateful to have his daughter with him.

“I can’t thank you enough,” he told the doctors.