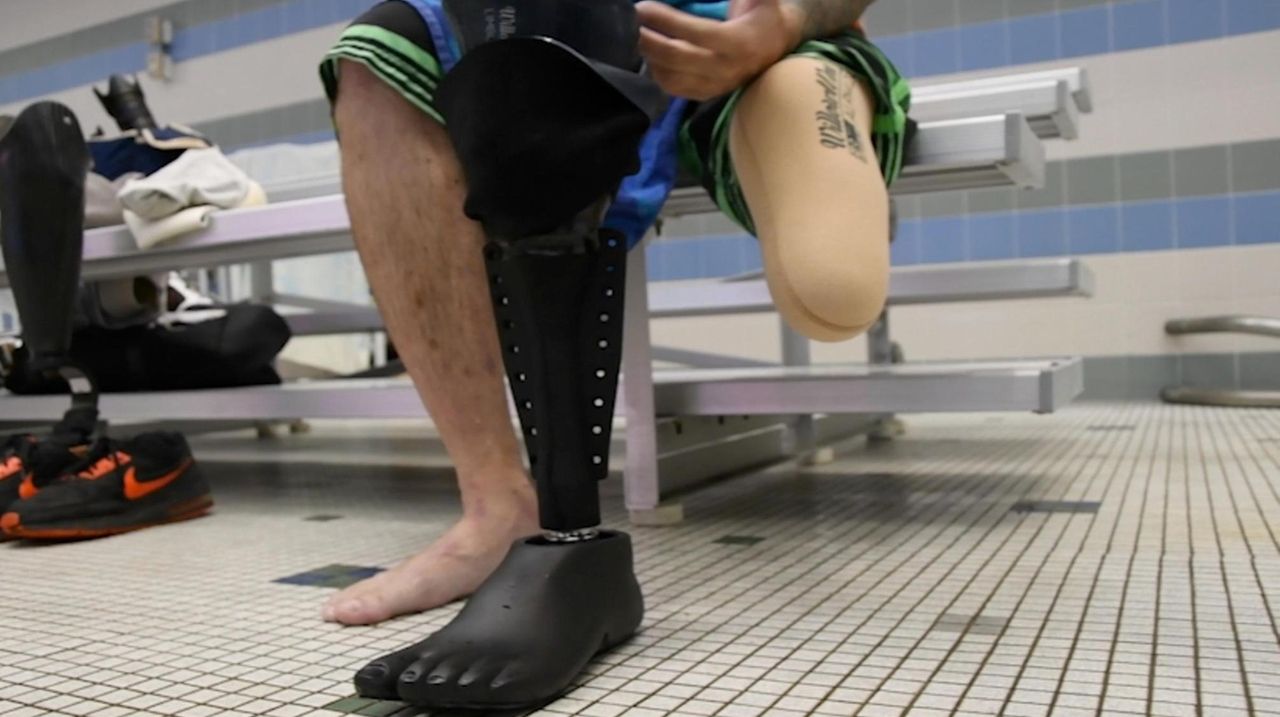 A team of 3D designers and physicians at Northwell Ventures and two other Long Island companies worked together to create a new experimental amphibious “swim leg,” a prosthesis that can be used by swimmers.  Credit: Martin C. Evans

But all that changed in 2011, when a bomb attack in Afghanistan mauled the Marine Corps corporal's body, forcing doctors to amputate his left leg below the knee. Vaughan spent 13 months recuperating at Walter Reed National Military Medical Center, and has used a prosthetic limb ever since.

“Before the Marine Corps, I grew up at the beach and the pool, and that was hindered after my service,” said the thick-shouldered veteran, who said he depends on almost-daily swims in his backyard pool as his major form of exercise.

The swim leg, which features a fin-like structure that fits onto the calf of the prosthetic, is made of nylon and carbon fiber that are layered by 3D printers. The design and materials combine to produce an artificial limb that is both strong and lightweight enough for walking, but waterproof for swimming and diving.

Northwell Ventures, a spinoff that develops commercial applications for Northwell's medical research, produced the device in collaboration with two other Long Island companies: Hicksville-based Eschen Prosthetic, which has expertise in designing artificial limbs, and Composite Prototyping Center of Plainview, which has experience with composite materials manufacturing.

Northwell Ventures is hoping to interest the U.S. Department of Veterans Affairs and other medical providers in offering this and similar devices to amputee clients. About 1.9 million Americans are amputees, according to Northwell, including some six percent of injured veterans.

Because their rod-like shape is too thin to provide much propulsion in the water, regular prosthetic legs are mostly considered dead weight by amputees who swim. Rather than use them, amputees typically cast them aside before swimming, and hop or scoot on their bottom to the water’s edge.

And without two legs to balance their swim strokes, leg amputees typically must propel themselves with their arms only, a slower, more tiring endeavor.

With the swim-prosthetic, amputees can walk around relatively easily while at the beach or poolside, then swim more efficiently once in the water — all without having to remove their prosthetic.

Vaughan was among about a half-dozen amputees who participated in a test of the custom-fitted swim legs. Members of the design team that produced the prosthetics compared their blood pressure and other vital signs before and after the participants spent time in the pool, treading water and swimming laps first with a regular prosthetic and later with the newly-designed amphibious limb.

Vaughan said although his recovery has been a series of steps forward and frustrating setbacks since he was medically retired from the Marines in 2012, he has remained relatively positive.

He said he considers having the amphibious swim leg a potential big step forward.

“Ever since I got hurt, there have been a lot of ups and downs — surgeries, setbacks,” said Vaughan, who is studying health science at New York Institute of Technology. “It seems like every year I have something new I have to get operated on or fixed.

“Today seems like a win, because I got something that works,” Vaughan said. “Now I can use it for something I love to do, which is go to the beach and swim.”