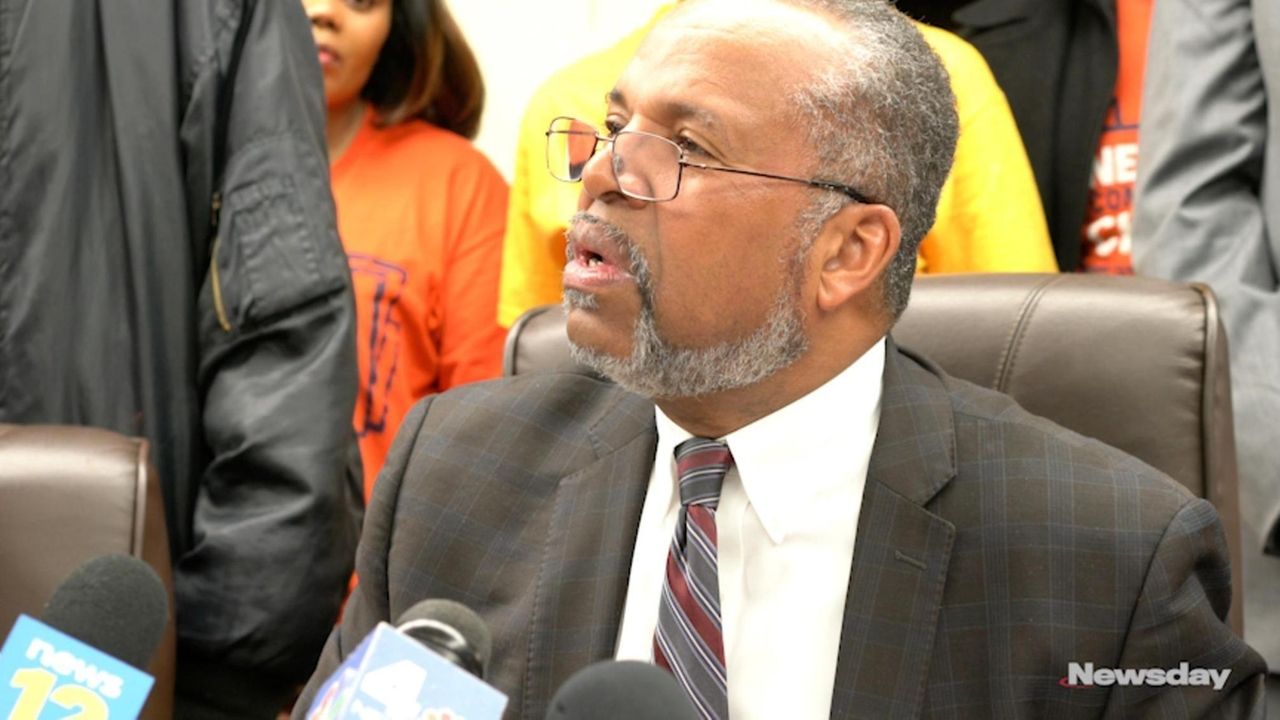 At a news conference at his office in Hempstead, attorney Fred Brewington spoke about a notice of claim filed against the Nassau County Police Department for police brutality against two teenagers in Roosevelt. Credit: Johnny Milano

A civil rights attorney on Monday filed a notice of claim against the Nassau County Police Department for what he called police brutality against two teenage brothers in Roosevelt who were allegedly beaten and then detained for hours without their parents being notified.

The attorney, Fred Brewington, said at a fiery news conference in his office in Hempstead that the police “took these young boys away from their mother and their father and hid them” for hours. He called it a “kidnapping” and contended the boys were falsely arrested for an assault they did not commit.

“An investigation was conducted and three juveniles were arrested for this crime," he said. "One of the juvenile subjects, age 15, was also charged with resisting arrest and obstructing governmental administration. The investigation has revealed that police officers acted within the scope of the law and exercised restraint and professionalism at the time of arrest.”

The case stems from the arrest of three teens in Roosevelt on Jan. 21. They were riding their bicycles at about noon when police arrested and charged them with assaulting a 32-year-old man in the neighborhood.

At the news conference, Brewington showed photographs of one of the boy’s  white hoodie with blood on it.

“Nassau County police: Stop being an occupying force in our community,” Brewington said. “You don’t have the right to treat our young men as though they are criminals simply because they are black. That is called profiling.”

The two brothers’ parents, who attended the news conference, said the oldest one, 15, ended up in Mount Sinai South Nassau hospital in Oceanside for hours that night with cuts to the head, a damaged ankle and other injuries.

Brewington called on police to fire the officers involved, or have them resign.

“At no time was excessive force used and a physical questionnaire was completed in the precinct indicating there were no injuries and the subject was in good health,” LeBrun said about the 15-year-old brother. “This document was verified and signed by both the juvenile subject and his mother at the time he was released from police custody.”

LeBrun did not comment last week on the allegation that the police took the boys away for hours without the parents being notified. The mother said she signed the document under emotional duress.

Brewington described the two brothers as model teenagers who are members of a local Boy Scout troop, attend a church regularly and sing in its choir, are good students and do extensive community service.

Their father, David Tillery, said, “My boys are not criminals. They are respectful, community-minded, churchgoing Boy Scouts who were on their way home from a friend’s house when they were made into victims by Nassau County police. Nassau: You picked the wrong kids to blame.”

The notice of claim alleges that police used foul language, made jokes about the boys, hit their bodies and slammed them on the hood and side of a car, tossed them to the ground, and knelt on them.

Then they prevented the boys from using their cellphones to contact their parents as they were handcuffed to tables and chairs in the police precinct, the notice alleges.

Their mother, Mondy Tillery, finally located them at the First Precinct by using the GPS on their cellphones, she said.

At one point, the tracking brought her to a dumpster, where she was afraid she was going to find her sons’ dead bodies, she said.

“Only a mother knows what it is like to have your child missing," she said.

A local pastor and activist, the Rev. Arthur Mackey Jr., told the news conference, “The day after Dr. King’s birthday they brutally beat them, and we are going to stand against it.”

The notice of claim is required before a lawsuit is filed, which Brewington said he intends to do.