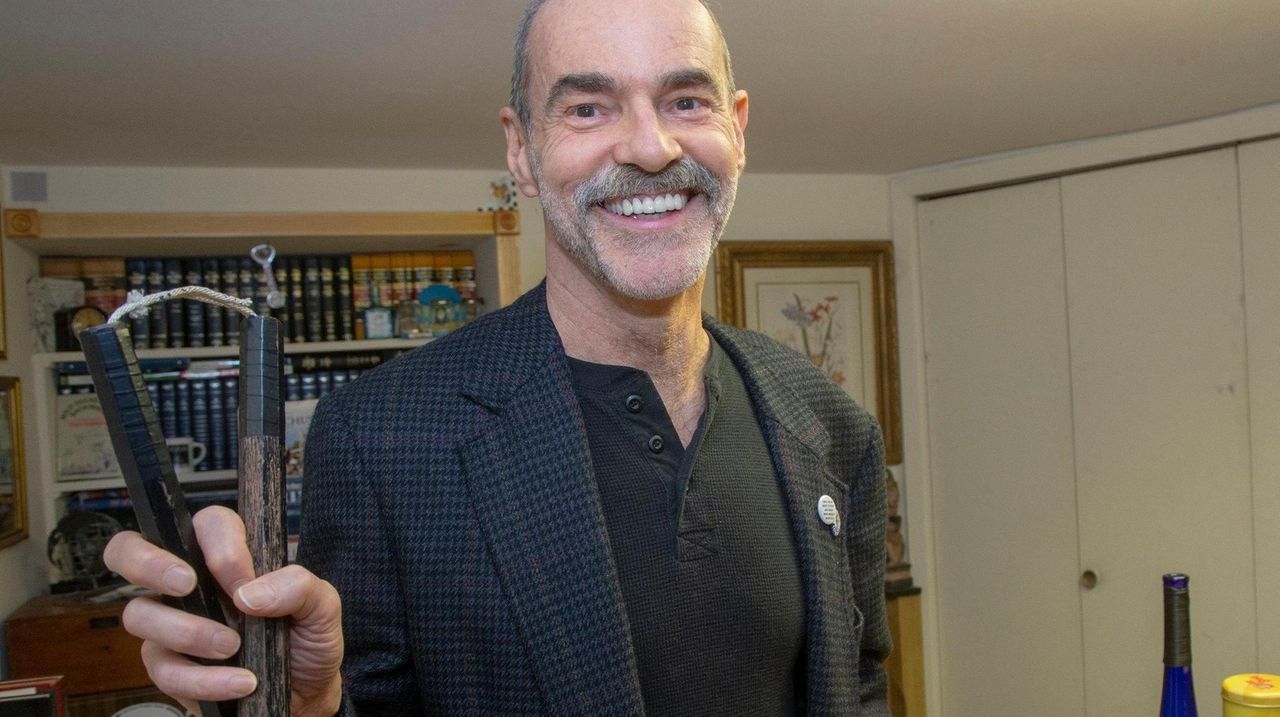 On Dec. 21, James Maloney of Port Washington talked about his 16-year battle to get nunchucks protected under the Second Amendment. Credit: Howard Schnapp

Using needle and thread, James Maloney repaired the string that bound his nunchucks together.

Maloney had untethered the  martial arts weapon nearly 20 years ago after he was charged with possessing nunchucks in his Port Washington home. His "outrage" over the charge in 2000 pushed him into a yearslong legal battle to strike down the state’s ban on the weapon, which consists of two sticks joined by a cord or chain.

Earlier this month, a court ruled in Maloney’s favor, deeming the ban unconstitutional.

“It was more a sense of relief when I saw the decision,” said Maloney, 60, a lawyer and a professor at SUNY Maritime College, who represented himself through most of the litigation.

Maloney said his interest in nunchucks began around the time that New York State outlawed the weapon. In the 1970s, kung fu movies swelled in popularity and in 1973, millions of Americans watched Bruce Lee twirl the weapon in “Enter the Dragon.”

New York banned what it called the "chuka stick" a year after the film's release. Legislators feared the weapon would proliferate among “muggers and street gangs,” Judge Pamela K. Chen, of the U.S. District Court for the Eastern District of New York, wrote in her ruling.

Maloney said he didn't know about the ban when he started training with “nunchaku,” a weapon originally used in Okinawan martial arts, as a high school student in Fort Lee, New Jersey. And he practiced nearly every day in his dorm room at SUNY Maritime College.

Over the years, Maloney said he developed his own martial arts style, which he calls “shafan ha lavan,” meaning "white rabbit" in Hebrew. Demonstrating the method last week, Maloney swung the sticks, careful not to let them touch the low ceiling in his small office in Port Washington.

He alternated between brandishing the sticks, which were flung over his shoulder, and executing a series of low side kicks.

Maloney’s father was fatally stabbed when Maloney was a boy, and he considered nunchucks an ideal weapon to thwart a home invasion or to confront someone with a knife. He’s confident he can wield the sticks in a way that would disarm, but not fatally injure an attacker.

“To me, it was a weapon that a citizen should have a right to have in his or her home,” Maloney said. “I found it outrageous that the state had just enacted this ban.”

He contemplated his constitutional argument for three years  before he decided to file his lawsuit, he said.

“This was my baby,” said Maloney, who documented the legal twists and turns on his blog.

Frank Gallo wasn't surprised when he learned about Maloney's lawsuit. He had seen his friend and fellow SUNY Maritime alum sink his teeth into a thorny issue before.

In 2000, Maloney sued the State University of New York over proposed changes to SUNY Maritime College. SUNY wanted to scale back maritime training to broaden the college’s appeal. Maloney unsuccessfully argued that the college should be devoted only to nautical education.

“I thought, Jim you’re fighting city hall and sometimes even if you win you’ve lost because of the amount of effort and time you could be putting into commercial legal work,” Gallo said.

But Gallo, 76, of Garden City, said he knew that after speaking to Maloney, he'd see it through.

“If he believes a cause is just, he’s going to pursue it,” Gallo said.

Maloney's lawsuit bounced around the court system before a federal judge dismissed it in 2007. But the case saw new life in 2010 after the U.S. Supreme Court ruled that an individual's Second Amendment right to "keep and bear arms" applies to states. The high court then vacated the decision in Maloney's lawsuit and remanded it to district court.

His case went to trial last year. The Nassau County district attorney’s office attempted to show that nunchucks aren't "typically possessed by law-abiding citizens for lawful purposes," the ruling read, and that the county prosecuted five “nunchaku-related" crimes — two assaults and three cases of possession — from December 2014 through January 2017.

Maloney countered by presenting the testimony of Kevin Orcutt, a retired sergeant of the Denver Police Department, who patented a nunchuck used exclusively by law enforcement.

Chen handed down her decision on Dec. 14.

When he read the ruling,  Maloney said he felt an overwhelming sense of relief — if only for a moment. Nassau County District Attorney Madeline Singas has 30 days from the date of the decision to appeal.

If she does so, Maloney said he will carry on his fight.

"The only worthwhile challenge," Maloney said, "is to traverse its full length."