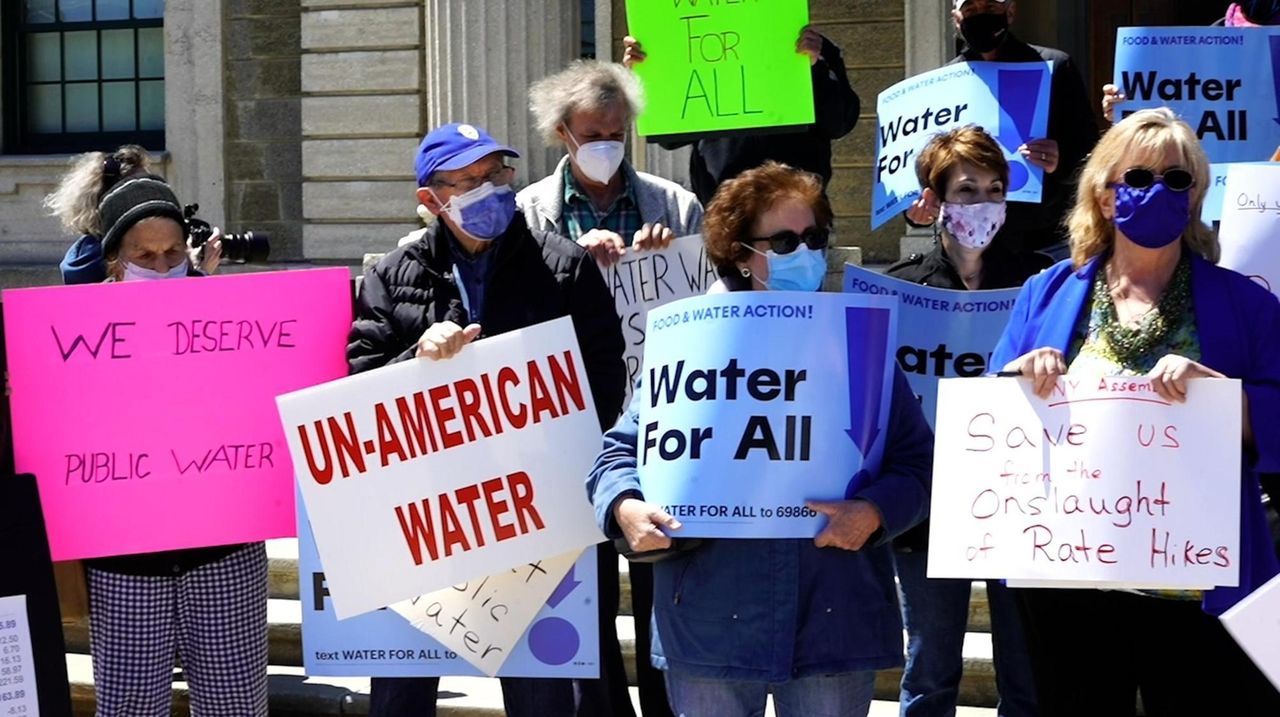 Nassau activists held a rally Monday at the county government building in Mineola to demand passage of state laws that would provide rate relief and form a new Nassau Water Authority, with just days before a 26% jump in water bills. Credit: Newsday / Chris Ware

Days before customers are hit with a 26% jump in water bills, Nassau activists rallied Monday in Mineola to demand passage of a state law that would provide rate relief for New York American Water customers while a new county water authority is formed.

Ratepayer groups from Sea Cliff to Merrick joined forces at the Theodore Roosevelt Executive and Legislative Building just after noon to call for the state Assembly to pass a bill that Gov. Andrew M. Cuomo and the State Senate had tried unsuccessfully to move through the annual budget earlier this month. The measure, which would have created a new Nassau County Water Authority and lowered rates by exempting the company or its successors from a special franchise tax, failed after Assembly members expressed concern it could negatively affect ratepayers of other utilities, including those in Suffolk who would not benefit. The State Senate passed the bill last week.

"We have a chance right now for the Assembly to do the right thing and pass this legislation," said David Denenberg, a rally organizer and co-director of the activist group, Long Island Clean Air, Water, Soil. "We’re simply asking for clean, reliable, affordable water. In 2021, we shouldn’t be subject to a corporate monopoly controlling a basic necessity, while our government taxes us for the very water service it refuses to provide for us."

On May 1, more than 124,000 Nassau ratepayers who are served by investor-owned New York American water will face an average 26% rate increase resulting from accumulated state-approved hikes after the Merrick-based company and the state agreed to forestall previously approved increases following the COVID-19 pandemic.

New York American Water in late 2019 agreed to be sold to Liberty Utilities of Canada for $607 million, but the transaction has been delayed by Public Service Commission requests for public entities or districts to take over all or part of the system. The current structure, and the pending sale, is the best option for ratepayers, and taking the company public will add debt and costs and take years to iron out, New York American Water has said.

But according to numerous entities and officials, a public takeover will resolve years of soaring rates, water quality issues and regulatory investigations of the company. The Suffolk County Water Authority, the Massapequa Water District and the Village of Sea Cliff have proposed operational plans, or partial takeovers of the system, which covers areas of Nassau extending from East Rockaway and Lynbrook, to Merrick, Sea Cliff as well as Glenwood Landing.

The state this month released a report that found a full or partial takeover was feasible and in the public interest to set the stage for a new Nassau County Water Authority to be formed as part of state budget legislation. The budget plan would also have included an exemption for New York American Water or its successors from a special franchise tax that currently comprises upwards of 50% of customer bills — a tax fully public water districts do not pay.

But the state Assembly held the measure up, and ultimately their efforts torpedoed the legislation. Assemb. Charles Lavine (D-Glen Cove) said more time was needed to review the legislation and hammer out an agreement that addressed concerns of constituents in districts outside the New York American Water territories.

Public Service Commission spokesman James Denn said the looming rate hike "can’t be delayed past May 1 without resolving the property tax problem." He noted the PSC stands "ready to work with all stakeholders to reach a resolution prior to May 1 that protects Nassau residents and ratepayers."

"For some Nassau residents, the most basic public necessity — water — has been in the hands of a private monopoly, and the government has allowed it," Denenberg said.

An April 14 letter to the PSC from Jared Kasschau, an attorney for Nassau County, noted the state’s April report of the advantages of a public takeover and taxing exemption "does not consider certain potential unintended consequences of making the water assets exempt from property taxes resulting from ownership by a new public water authority."

Nassau, he wrote, doesn’t believe the savings shown from municipalization "accurately reflects the cost of debt service on the bonds that the new authority would issue to pay for NYAW’s assets," calling into questions the savings the state anticipated. He called on the PSC to not only delay the May 1 rate increase but to "eliminate" it. He didn’t offer suggestions on how to eliminate the increase which he labeled "unconscionable."

Lloyd Nadel, a Mineola lawyer who is counsel to the Glen Head-Glenwood Landing Civic Council, said his main message to the Assembly and Nassau County officials is that concerns about the loss of tax revenue resulting from passage of the tax-exemption bill are "a distraction"

"It’s not the issue," he said. "The county can easily afford to forego $30 million in taxes" that would result from providing the exemption, noting it’s around half what Nassau County paid in overtime alone last year, and less than 1% of the county budget for 2021.

A statement from the office of Nassau County Executive Laura Curran said her "number one priority is protecting our taxpayers. American Water ratepayers deserve affordable, clean water and the County Executive looks forward to supporting a plan that provides them with much needed relief and doesn’t burden Nassau residents."

Denenberg, a former Nassau legislator, said the rally was being held at the Nassau County government offices for "symbolic" reasons.

"It’s because we’re calling for a new Nassau County Water Authority, and because Nassau has refused to provide leadership for a solution" to the water issues, he said. "We’re calling for Nassau and Hempstead Town to either get on board or get out of the way."